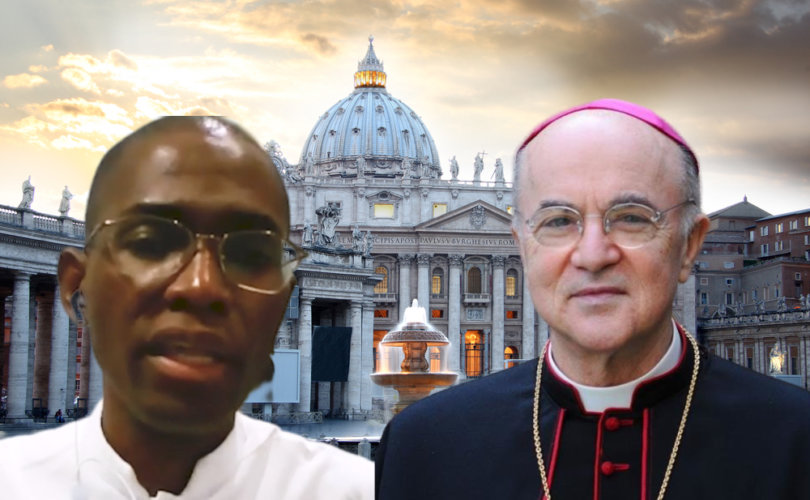 (LifeSiteNews) – We are honored to publish herewith an open letter to Father Jesusmary Missigbètò, written by His Grace Archbishop Carlo Maria Viganò, honoring this African priest for his loyal defense of the truth of the Catholic Faith.

Father Jesusmary – a pen name of Abbé Janvier Gbénou – had started to speak up publicly against some of the scandalous statements of Pope Francis, after the Pope had publicly supported civil same-sex unions in October of 2020. The African priest was expelled by Opus Dei and suspended as a priest for exactly that charitable and kindly expressed criticism of the Pope, and in June of this year Pope Francis himself endorsed these harsh sanctions.

Father Jesusmary is disallowed from practicing his priestly ministry, and is only to celebrate Holy Mass in private if he abstains from further public criticism of Pope Francis.

In light of this punishment for a most humble and kind priest, it is a great joy and relief for us to have Archbishop Viganò come to his defense. The Italian prelate rightly points out that Father Jesusmary has done the right thing and that is to be honored for his Catholic witness.

Amen I say to you: it will be more tolerable for the land of Sodom and Gomorrha on the day of judgment than for that city. Mt 10:15

I learned from the press (here) about the news of your suspension a divinis and your expulsion from Opus Dei, which was imposed on you by the Congregation of Bishops as a canonical sanction for failing to show “respect and obedience to the Supreme Pontiff.”

Permit me to express my spiritual closeness to you at a moment of great trial for you: as a baptized Catholic and as a Minister of God, it must be painful for you to be accused by the same person who, with the mercy that distinguishes his every act, receives notorious abortionists, those who are publicly cohabiting, transvestites, sodomites, rebellious clerics, heretics, usurers, and those who starve their people.

I imagine that it is very disheartening to be reproached for what in other times would have merited praise – if not even the glory of the altars – for the saints who did not hesitate to scold, even harshly, the corruption of the papal Court. A Saint Peter Damian or a Saint Catherine of Siena would today be scandalized by the duplicity of the one who never misses any occasion to denigrate good Catholics and please the enemies of Christ and His Church.

What you face for your fidelity to the Magisterium and for your true respect for the See of Most Blessed Peter is an occasion to expiate the faults and scandals of ecclesiastics, in the spirit of expiation and reparation that unites us as members of the Mystical Body to Our Lord who is its Head, immolated on the Cross in reparation for the offenses committed by men against the Most Holy Trinity.

Your trial, dear and reverend Father Gbénou, unites you to those other trials, often even harder to bear, to which many of your brother priests have been subjected by their Superiors: priests thrown out of their parishes and forced to live and sleep in their cars or in makeshift lodgings; pastors removed from their parishes because they are unwilling to renounce the celebration of the Holy Sacrifice in the Apostolic Rite; religious sent away from their Monasteries and Convents because they do not want to renounce their fidelity to the charism of their Order; seminarians who find themselves impeded from priestly formation simply because they do not accept the dissipation and worldliness imposed on them.

If you ever have doubts about the intentions of those who, usurping authority against the purpose for which it has been instituted by Christ, rage against those who are good, I invite you to consider how their severity dissolves in the face of the much graver shortcomings of fornicating clergy, corrupt Prelates, and Cardinals who are molesters and thieves.

Your crime, Reverend Father, is that you created a dangerous term of comparison with them, uncovering the tomb seething with worms that is the Bergoglian church. If you had participated in “Gay Pride” by publishing your photos in poses unbecoming of, I will not say an ecclesiastic, but even of a pagan; if you had given scandal by indulging in shameful intercourse with another priest; if you had denied Catholic truths or contested Christian morality, you would by now be the head of a Roman Dicastery, or the Bishop of a prestigious Diocese, and you would be standing in your threaded ecclesiastical finery right next to the one who has deprived you of the faculty of celebrating Mass, hearing Confessions, and preaching. Just like you, many other priests and not a few bishops and even Cardinals see themselves instead derided, offended, and unjustly punished simply because they are too Catholic.

I ask myself whether, in the face of the shame of the corruption of the corrupt clergy who so please Bergoglio to the point of surrounding himself with them in the rooms of Santa Marta, you ought to consider the sanctions that have been imposed on you as a cause for pride. L’esilio che m’è dato, onor mi tegno – The exile that has been given to me, I consider an honor (Dante). If the house of God has become a den of thieves, whoever wants to remain close to the Lord must shake its dust off of their feet (Mt 10:14), and not even deign to greet those who deny Christ and crucify Him daily by their conduct.

Rejoice then, dear and reverend Father, because if the enemies of God did not find in you any reason to persecute you, it would mean that you are not bearing witness to your faithfulness to the Lord. If the world hates you, know that it hated me before you (Jn 15:18), Incarnate Wisdom has said. The present trials are thus a cause for spiritual consolation, an occasion of sanctification, and an opportunity for the edification of the simple. The Lord will repay you one hundred times over for what you are enduring.

To you, dear Father, and to all those who like you are persecuted propter iustitiam (Mt 5:10), I dedicate my memento whenever I pray in the Holy Sacrifice of the Mass.

LifeSite has published several open letters written by Father Jesusmary, in which he expresses his objections to some of Pope Francis’ statements. They can be found below: