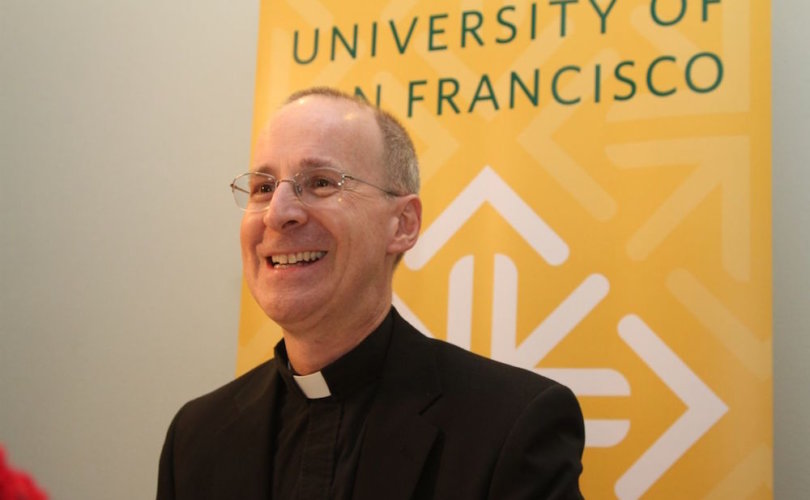 September 19, 2017 (LifeSiteNews) – The revocation of Fr. James Martin, SJ’s invitation to speak at Catholic University of America’s Theological College has sent out shock waves in the world of Catholic academics.  As the certain members of the intellectual set circle the wagons in Martin’s defense, they elevate notions of ‘academic freedom’ above adherence to the authentic message of the Gospel.

Rank and file Catholics wonder, “Is it really the duty of Catholic institutions to provide a platform for messages antithetical to the Gospel?”

Isn’t that playing with fire?

After Catholic University announced it revocation of Martin’s invitation, Jesuit-run America Magazine quickly released a statement supporting Fr. Martin, a longtime editor of the publication. “Father Martin has been subjected to repeated, calumnious attacks . . . involving invective that is as appalling as it is toxic,” they wrote.

But natural law is not calumny; the phrase being “beaten like a rented mule” is not invective–it’s just a common saying.

The statement continues, “The campaign against Father Martin, waged by a small but influential faction in the U.S. Church, is unwarranted, uncharitable, and un-Christian.”

This contrasts with the view that many share that Fr. Martin’s pro-gay message presented in his book, Building a Bridge, and broadcast through numerous speaking engagements is, in fact, unwarranted, uncharitable, and un-Christian toward the ‘LGBT community.’

I am a same-sex attracted man who recognizes the danger inherent in Fr. Martin’s message to same-sex attracted Catholics.  Despite what some academics might say, it is reckless and irresponsible to give folks like Fr. Martin–who openly contradict Church teaching–a platform to speak at Catholic institutions.

Together they assert that “[Martin’s] recent appointment as a consultant to the Vatican's Secretariat for Communications affirms the power of his work, which is a tremendous tool both for preaching the Gospel and for evangelization.”

It is not.  Quite the contrary.

Fr. Martin’s work undermines the preaching of the Gospel by simultaneously affirming homosexual attractions while failing to address the sin of engaging in homosexual activity.  Fr. Martin treats the same-sex attracted as if we are helpless babes who are constantly at the mercy of our inclinations, utterly without self-control.

Martin’s message is an insult to the many same-sex attracted Christians who, like me, realize that although we may have no control over our inclinations, we certainly do have complete control over our actions and relationships.

Same-sex attraction is a cross to be born like any other cross in a person’s life.  We are not special.  We don’t need Fr. Martin to make excuses for us.  We are ordinary sinners like everyone else.  In the end, Martin’s approach ends up depriving us of the authentic good news of the Gospel.

What Martin and his Jesuit defenders get wrong, Cardinal Sarah gets right

Cardinal Sarah recently issued a strong rebuke to clerics like Martin, calling attention to the fact that the Church teaches “ … things in the Catechism about homosexuality that some members of the clergy choose not to quote, including the clear warning: ‘under no circumstances can [homosexual acts] be approved’ (CCC 2357).”

The cardinal adds: “The respect and sensitivity to which the Catechism rightly calls us does not give us permission to deprive men and women who experience SSA (same-sex attraction) of the fullness of the Gospel. To omit the ‘hard sayings’ of Christ and his Church is not charity.”

Sarah asks his fellow bishops and priests not to deprive the same-sex attracted of the hard parts of the Gospel but to lavish them with its life-giving truth that we might live in freedom as sons and daughters of God.

While Cardinal Sarah pleads for faithfulness to the authentic message of the Gospel, Martin suggests the Church should change the language in its catechism on homosexuality and same-sex inclinations to be more welcoming to LGBT-identifying Catholics while simultaneously avoiding speaking about homosexual acts as sinful.

The weakness of the Jesuits’ defense

“Jesuit Father James Martin claims that [his book’s] consistency with Church teaching is attested to by (A) his own good standing as a priest, and (B) the canonical approval the book received from his Jesuit superior,” notes Edward Peters, JD, JCD, Ref. Sig. Ap.

Martin’s claim, “that he is a priest in good standing, is neither contested nor relevant to the question of whether his book is doctrinally sound or pastorally trustworthy.” Peters adds, “to tout a religious superior’s imprimi potest as proof of one’s personal or authorial orthodoxy is to misconstrue what that certification is and what it means.”

His Jesuit brothers echo Martin, asserting that Building a Bridge “was reviewed by the Censor Librorum of the USA Northeast Province of the Society of Jesus, [and] received an Imprimi Potest from Fr. Martin's provincial, declaring its suitability for publication.”

Are Martin’s opinions and views, “as he seems to claim, necessarily acceptable in the Church?” asks Peters.

The idol of ‘academic freedom’

While other intellectual elites in the world of academia may or may not agree with Martin’s message, they defend giving Martin a platform to speak at Catholic schools.

Dr. John Garvey, president of The Catholic University of America, rather than defending the university’s decision to rescind Fr. Martin’s invitation to speak, denounced Fr. Martin’s critics.  In fact, he compares those critics with leftist Antifa anarchists.

“The campaigns by various groups to paint Fr. Martin’s talk as controversial reflect the same pressure being applied by the left for universities to withdraw speaker invitations,” said Garvey.  “Universities and their related entities should be places for the free, civil exchange of ideas. Our culture is increasingly hostile to this idea. It is problematic that individuals and groups within our Church demonstrate this same inability to make distinctions and to exercise charity.”

“Catholic University is Catholic, but it is also a university. Fr. Martin and others who reject moral teachings of the Church should be allowed to speak there and should be respectfully listened to and engaged. That's how learning happens.”

While academic freedom is important, it is no excuse for Catholic colleges to host a pro-gay activist like Fr. Martin.

In his second attempt to reach out to and correct Fr. Martin, Cardinal Sarah penned an opinion for The Wall Street Journal, saying, “Those who speak on behalf of the church must be faithful to the unchanging teachings of Christ, because only through living in harmony with God’s creative design do people find deep and lasting fulfillment.”

Fr. Matt Bozovsky, a parish priest in America’s heartland, observes via Twitter, “Claims that challenges to Fr Martin [are] censorship [are] making [an] idol of freedom. This isn’t an academic exercise: Souls [are] at stake, truth matters.”

Austin Ruse, president of C-FAM (Center for Family & Human Rights) and a prominent thorn in Fr. Martin’s side, advises in his recent Crisis Magazine commentary: “If you find out Fr. Martin is speaking in your diocese, you must complain, loudly, without fear. Knock on doors. Call the bishop. Demand meetings.”

“If he is speaking near you, show up, ask hard questions, let your views be known, make him account for his dissent,” continues Ruse.  “Understand you do not need to use the dulcet tones and finely tuned arguments of our natural law philosophers. That is for them and it is good. Use your language and tone and don’t be intimidated. And understand, all along you are defending the true faith even if bishops and priests refuse to do so.”