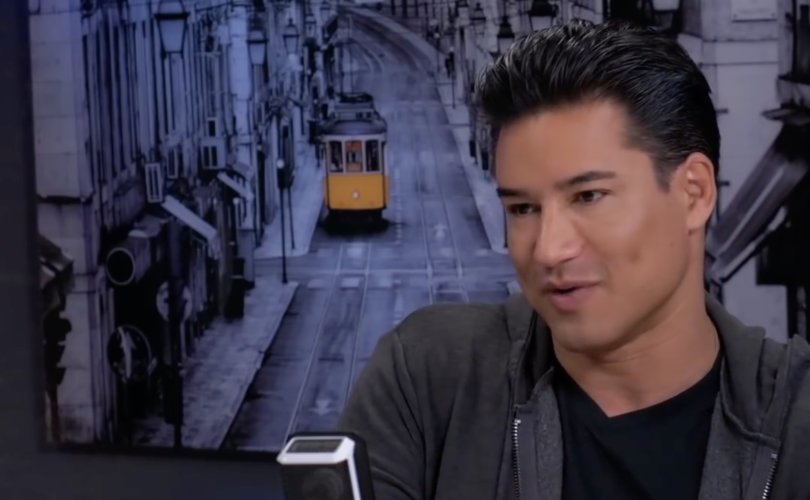 August 2, 2019 (LifeSiteNews) – Most of you will have already seen the controversy swirling around Extra host Mario Lopez, who found himself the target of the LGBTQ lynch mob this week after making a handful of utterly reasonable comments on the Candance Owens Show, a conservative podcast, back in June. In a discussion about actress Charlize Theron’s decision to raise one of her children transgender, Lopez noted that he had concerns about children who are very young choosing their own gender identity.

“I would say if you come from a place of love you really can’t go wrong,” he said. “But at the same time…if you’re three years old, you say you’re feeling a certain way or you think you’re a boy or a girl, whatever the case may be, I just think its dangerous as a parent to make that determination then, ‘Okay, you’re gonna be a boy or a girl’…I just think of the repercussions later on.”

The LGBTQ groups came gunning for Lopez first, with GLAAD accusing him of making “dangerous” statements against a “vulnerable group of children.” GLAAD helpfully offered him re-education on the issue of transgender children (or else.) The rage mob obediently followed, demanding that he be fired from his TV job and changing his Wikipedia page to read “Mario Lopez Jr. is a transphobic and misogynistic American actor.” Media outlets published blatant lies, claiming that Lopez had opposed “supporting transgender children.” In a matter of hours, Lopez faced a crisis: His comments could very well see his career burned down overnight.

And so Lopez did what the mob demanded, coming out to confess that his remarks were “ignorant and insensitive” and that he now has “a deeper understanding of how hurtful they were.” Additionally, Lopez noted, “I have been and always will be an ardent supporter of the LGBTQ community, and I am going to use this opportunity to better educate myself. Moving forward I will be more informed and thoughtful.” Lopez’s re-education was complete in short order: Grovel, or else. The totalitarianism of the LGBTQ crowd wielding the club of cultural power is so powerful that panicky celebrities thank the mobs demanding that they be fired for the “opportunity” to apologize and confess.

Many other commentators have already pointed out the obvious fact that Lopez was right (the first time), and that the vast majority of reasonable people agree with him. Responsible parents do not even let their three-year-old children choose their meals or their bedtimes, much less their gender. To say that a three-year-old’s claim of being the opposite gender before they can even understand what gender actually is—that is insane, it is dangerous, and it is going to destroy the young lives of a lot of children before this horrifying experiment is over.

But there is something inherently insidious about what happened to Mario Lopez, something that everybody knows but that nobody can say out loud: Lopez probably hasn’t changed his mind on the issue. Lopez, like most Americans, probably still believes it is dangerous to take the word of a three-year-old on something that a toddler by definition cannot understand. But the LGBTQ mob presented him with a choice: Confess your sin, show your penitence, and we won’t destroy your career. And so he could stick to his guns and end up with his head on a stick, or he could give them the statement they demanded and hope that his turn in the news cycle would be over quickly.

There’s something creepy about compelling panicky people to repudiate something they’ve said by blackmailing them and threatening to destroy their lives, with all the insidious sickly sweetness of a sadistic interrogator who has arrived with the sole goal of forcing you to say something you do not want to say. If you believe that little children should be left alone and permitted an uncomplicated childhood unpoisoned by the insane post-modern ideologies of their delusional parents, then you must be forced to shuffle the public walk of shame while everyone screams at you before the high priests of the LGBTQ movement will grant you absolution.

This week, it was Mario Lopez. Next week, it will be somebody new.