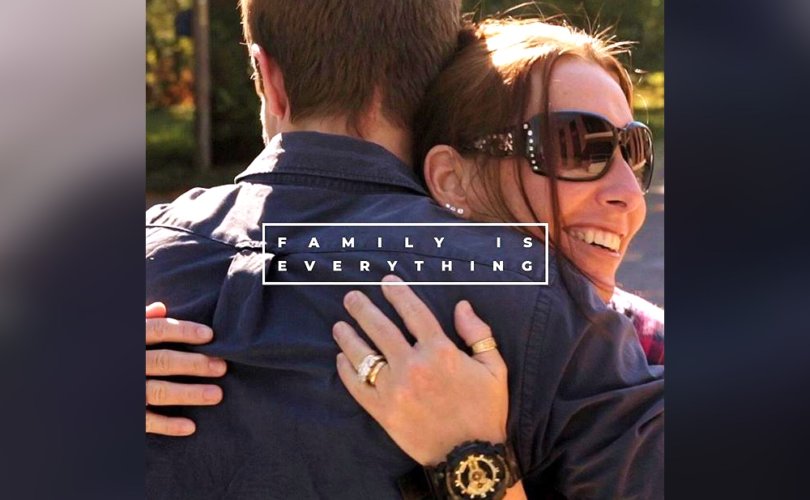 February 27, 2018 (LifeSiteNews) – A new documentary, I Lived on Parker Avenue, shines a bright light on the beauty of adoption and how choosing adoption over abortion results in a cascade of unforeseeable goodness in many lives.

It follows nineteen-year-old David Scotton and his adoptive family — parents and grandparents — in tow, traveling a thousand miles to meet David’s birth parents.

David, now twenty-four years old, has emerged as not only a strong voice for adoption, but for the entire pro-life movement.

You will want to watch the entire thirty-minute video in order to understand the meaning of its title.  But that won’t be a problem: David’s story is riveting.

A poignant scene in the video focuses on a pivotal moment in his birth mother’s life.  After eighteen-year-old Melissa found herself pregnant in 1993, she and boyfriend Brian decided it would be best for her to have an abortion.  After all, they reasoned, they were a young couple who some days had to go without food.  Brian asks, “How could we care for a child?”

Melissa recounts that as she was being ushered into the abortion clinic, the staff tried to prevent her from hearing the words of those praying and protesting on the sidewalk. Yet as she entered the building one woman’s words made it to her ears:  “Your child has ten fingers and ten toes.”

In an appearance on Fox and Friends Weekend, Melissa explained what went through her mind while waiting for the abortionist to perform the procedure.

Multiple things happened.  As I was on the table, the protesting outside had a lot of influence on my decision.  And I remember coming in and I heard lots of different things being said [by the protesters] and one thing that stuck out in particular was ‘Your child has ten fingers and ten toes.’  And I’m lying on that table in a gown and as the doctor comes in he slides over on his chair and he’s within, like, seconds of touching me and … “I can’t do this.  I just cannot do this.”

Melissa quickly dressed and ran out of the clinic.

“David was seconds, literally, from not being here,” says Melissa, adding that putting her newborn son up for adoption was “bittersweet, because I wanted him.”

On the train from his home in Louisiana, where he grew up, to Indiana, where he was born, David explains, “I don’t want to live my life not ever knowing what might have been.  I certainly understand why Melissa and Brian may have considered abortion. I understand that they were not in a position to take care of me.”

David adds, “The most important thing I can do in my entire lifetime is thank them for that decision.”

By reuniting with his birth parents, David wasn’t simply satisfying his curiosity.  He had a much bigger purpose:  “We’re gonna all fill in this missing piece of the puzzle that’s been in all three of our lives.”

But more than that, David, along with his adoptive and birth parents, has a message for the entire planet.

David makes it clear:  “We are doing this because we want to save lives.”

In the Fox and Friends Weekend interview, David’s birth mom was asked, “Melissa, there are thousands of women across the country who have appointments right now at an abortion clinic.  Having gone through what you’ve gone through, with what you know now, what would you advise them?

I would beg and plead with them with all my might to please consider the alternative, and, I wish that I would’ve been more informed and less naive.

In the documentary, as David rides a train home from meeting his birth mom who saved his life, he says, “I’m just wondering, ‘Why me?  Why was I the one who was saved?’  It just makes me feel lucky.  Like I have a mission to do in life.”

I Lived on Parker Avenue, while displaying the beauty of adoption, acknowledges that adoption is often accompanied by a certain amount of messiness:  The breaking of biological bonds, the heartbreak of that separation, and lots of unanswered questions, whether it be birth parents wondering, Does he hate me for giving him up? or an adopted child wondering if his birth parents ever think of him.  This movie doesn’t shy away from revealing the sadness of full-siblings, reunited for a brief moment after previously not knowing each other existed, returning back to their separate worlds.

I Lived on Parker Avenue goes live online for free on March 8th and is sure to sway many hearts to the inherent goodness in adoption over abortion. Visit www.ILivedonParkerAve.com.

Hint:  Make sure you watch this video all the way through to its end credits and beyond to see how David’s friends express their gratitude to birth Mom, Melissa, for her split second decision not to abort him.  You’ll be glad you did.