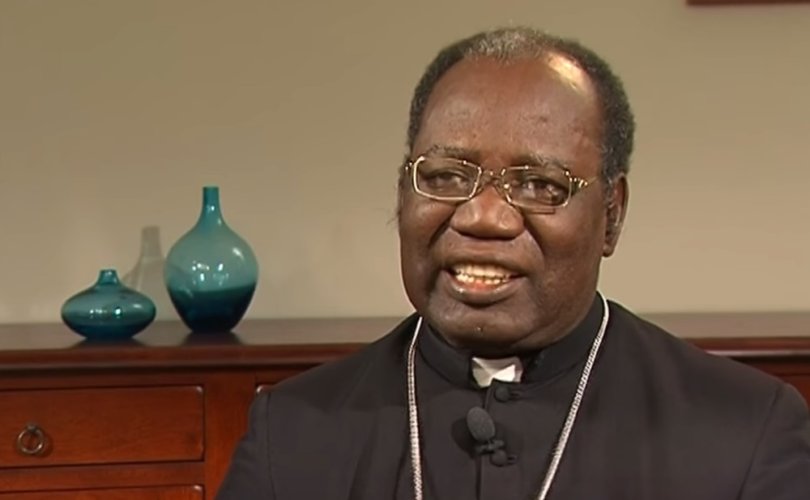 December 5, 2018 (LifeSiteNews) – Cardinal Polycarp Pengo of Tanzania has refused to welcome international aid programs that are linked with the promotion of homosexuality, insisting that “it is better to die of hunger than to receive aid and be compelled to do things that are contrary to God’s desire.”

The German bishops' news website Katholisch.de and the Catholic Information Service for Africa have picked up on a November 30 blog entry of the Eastern African Bishops' Conferences' Association AMECA, according to which Cardinal Polycarp Pengo has asked the government of Tanzania not to accept aid from western states which give their aid on condition of their acceptance of homosexuality in his country.

The November 30 AMECA blog entry states: “The Cardinal said that there are some threats from developed countries alleging that ‘they will stop support us if we are against homosexuality. It is better to die of hunger than to receive aid and be compelled to do things that are contrary to God’s desire,’ Cardinal Pengo said.” The cardinal then added that “the sin of homosexuality was the cause of destruction of Sodom and Gomorrah and that, these things are contrary to God's plan in creation and should not be accepted at all.”

Continues the AMECA report: “He thanked the Tanzanian Government for its position on the matter while stressing that all Tanzanians should say no to [homosexuality] which apparently is encroaching very fast in African countries.” Repeating his stance, Cardinal Pengo added, “we cannot accept such displeasing things to God; and if we are starving because we have refused to engage in such acts, then we would rather die with our God.”

According to the report, the Minister for Internal Affairs, Kangi Lugola, has just said that “homosexual acts should be shunned by every human being created in the image of God because the act is against human nature and, consequently, the Government of Tanzania will not accept it.”

Cardinal Pengo joins in his resistance against the homosexual agenda the late Bishop Evaristo Chengula of Mbeya Diocese who, as the AMECA report points out, “was the first to warn [the] Tanzania government not to accept homosexual acts several days before he died.”

In Tanzania, homosexual acts are being punished with sentences of up to 30 years imprisonment. As Katholisch.de points out, “many western states and aid organizations condemn this policy and have repeatedly threatened to stop giving their aid.”

Most other African countries also refuse to accept homosexuality. The Nigerian Cardinal John Onaiyekan said at the beginning of 2018 that in his country, there exists a consensus in society to reject homosexuality. To accept homosexuality is, in his eyes, “no progress.” In 2015, the Archbishop of Abuja, Onaiyekan, stated that the position of the Church in Nigeria against homosexuality is “irrevocable.” He then added: “Unfortunately, we are living in a world where these things have now become quite acceptable, but the fact that they are acceptable doesn’t mean that they are right…The Catholic Church considers itself as carrying the banner of the truth in the world that has allowed itself to be so badly deceived.”

The remarks of these African cardinals stand in stark contrast to sentiments expressed by Western prelates.

Only recently, the Vatican approved the re-election of a rector at a German Jesuit Graduate School in Frankfurt, Father Ansgar Wucherpfennig, in spite of his having blessed homosexual couples and claiming that the Bible did not know about homosexuals the way we know them today.

Additionally, Cardinal Christoph Schönborn just hosted a rock concert in his St. Stephen's Cathedral in Vienna. The event was co-hosted by a prominent Austrian homosexual activist and presented as its main actor a man who recently played the roles of homosexuals in several prominent pro-LGBT films. The man stood on the cathedral’s altar rail shirtless as part of the performance.

In 2014, Cardinal Walter Kasper, when discussing with Edward Pentin and other journalists the then-ongoing synod on marriage and the family and the African resistance to moral laxity, said: “The problem, as well, is that there are different problems of different continents and different cultures. Africa is totally different from the West. Also Asian and Muslim countries, they’re very different, especially about gays. You can’t speak about this with Africans and people of Muslim countries. It’s not possible. It’s a taboo. For us, we say we ought not to discriminate, we don’t want to discriminate in certain respects.” Kasper then added: “There must be space also for the local bishops’ conferences to solve their problems, but I’d say with Africa it’s impossible [for us to solve]. But they should not tell us too much what we have to do.”