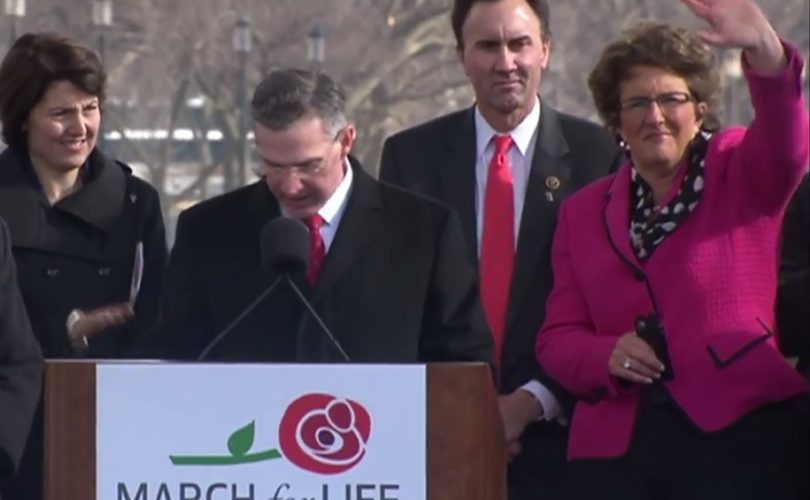 Congresswoman Jackie Walorski (R) greets the crowd at the March for Life in D.C. on January 22, 2015.

In a bizarre twist of irony meeting ignorance, one of the women most responsible for the decision not to vote on a bill to end late-term abortion stood on the stage at the 2015 March for Life and received an ovation from hundreds of thousands of pro-life advocates.

Rep. Jackie Walorski, R-IN, was one of a handful of Republican women who unleashed a last-minute ambush against the Pain Capable Unborn Child Protection Act (H.R. 36). Led by Congresswoman Renee Ellmers, R-NC, the women balked at a provision of the bill that required women who exploited the bill's rape exception to report their crime to the appropriate authorities before procuring a second- or third-trimester abortion.

Walorski, Ellmers, and other, mostly unnamed Republican women – reportedly including Reps. Ann Wagner of Missouri and Marsha Blackburn of Tennessee – led an effort to pull the bill, which would bar abortion after the 20th week of pregnancy. Walorski and Ellmers removed themselves as co-sponsors of the bill last Tuesday, two days before the expected vote.

The mutiny of Republican female lawmakers, who had been endorsed by the pro-life community, threatened to throw the GOP into the uncomfortable position of passing a bill over the objections of Republican women specifically about rape. Cue the footage of Todd Akin.

So, at the last minute, the House leadership withdrew the 20-week abortion bill and substituted the No Taxpayer Funding for Abortion Act in its place. (It passed handily.)

After pulling their sponsorship, Ellmers and Walorski publicly stated they would have voted for the bill if it came to the floor – something their actions assured would not occur. Both had voted for the identical bill in 2013, rape provision and all.

Walorski's decision to withdraw her support from the bill came after attending her local March for Life in Elkhart, Indiana, on January 10. “I can't thank this wonderful organization enough for their work in our community and for protecting the sanctity of human life,” she said at the time.

“We were just as surprised by Rep. Walorski's action as everyone else,” Mike Fichter, president and CEO of Indiana Right to Life, told the Indianapolis Star. “Since pulling her sponsorship, she has pledged to vote for the bill. But there's no denying that the sponsorship action that she took threw the expected timeline into disarray.”

Pro-lifers, informed that the symbolic vote would take place as they were marching, expressed feelings of betrayal. Yet there was Walorski amid the Congressional delegation to the march, casting her shadow over pro-life champions like Chris Smith and Tim Scott.

No shrinking violet, Walorski — whose Congressional district includes Notre Dame — stood directly to the left of the podium in a hot pink blazer. (Renee Ellmers – who also spent the past week declaring that the pro-life movement alienated Millennials – also tweeted a greeting to the mostly young 2015 March for Life participants.)

Congresswoman Walorski's introduction, and kind reception, takes place at approximately 46:25 of the video below:

The applause is either a sign of uncomfortable etiquette or an indication of how disconnected the pro-life movement is from what is happening inside the halls of power.

Jackie Walorski had no business on the stage of any pro-life event, especially less than 24 hours after killing major national pro-life organizations' top legislative priority.

After the march, inside her legislative offices, Walorski should have had an overwhelming response from her constituents who support the right-to-life. Applause and accolades should not have been on the agenda.