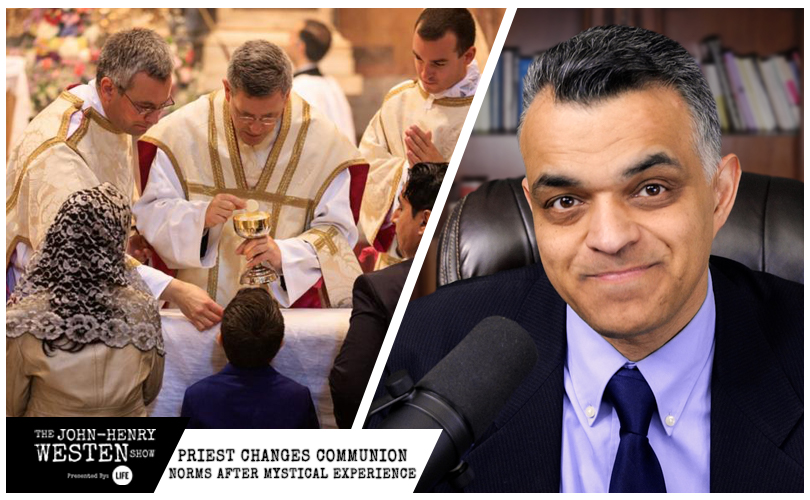 April 26, 2021 (LifeSiteNews) — In February, a priest was caught on video having a mystical experience during Mass after which he went straight to the pulpit to announce that from that moment on, Holy Communion at that parish would only be given on the tongue and kneeling. The video, which has gone viral with nearly two million views, captured the priest bowing down (practically doubling over), shaking, and crying. He was bowed down for about 20 seconds, which is of course a long time during Mass while everyone is waiting.

In this episode of The John-Henry Westen Show, I show you that clip and exactly what he said, but also I get clarification on what such a declaration is all about from well-known theologian and liturgical expert Dr. Peter Kwasniewski. This way, we can unpack this properly.

On February 7, 2021, at the conclusion of the 11 a.m. Sunday Mass, Fr. Fredy Leonardo Herrera Fuentes, pastor of Immaculate Heart of Mary parish in Bogotá, Colombia, told parishioners that “from this moment in our parish, it’s only going to be possible to receive Holy Communion on the tongue and kneeling down.”

A priest who goes by the name Miles Mariae, “the soldier of Mary,” has produced an English voiceover version of the video and given me permission to use it. So here is the link to the video with thanks to Father Miles Mariae.

Dr. Kwasniewski told me that there is a problem with a priest at a Novus Ordo parish refusing Holy Communion to those who wish to receive on the hand in a diocese where that is permitted. “Almost any canon lawyer (and certainly any bishop) would say no, he cannot refuse, because the Church’s discipline (however flawed it may be) expressly allows for this.”

Dr. Kwasniewski said, “It is always UNDERSTOOD that if one’s conscience says that a proposed course of action is sinful or risks committing sin or being a near occasion of sin, one must refrain from it.”

He added, however, that the priest making such a decision would likely get suspended by his bishop. Dr. Kwasniewski knows several priests who have been suspended over this.

For me, the matter is quite clear. Some of you may recall that in one of my previous shows I covered this issue with a video called “5 reasons why Catholics should only receive Holy Communion on the tongue.” I encourage you to watch that if you’re interested.

This matter of the proper way to receive Our Lord is so important that Voice of the Family did a whole conference on the subject in July 2020. As part of that conference, Catholic veteran pro-life activists from across the world joined together in unison to declare that they would only receive Holy Communion on the tongue while kneeling out of reverence to Our Lord and Savior Jesus Christ.

With so much irreverence for Our Lord in the Blessed Sacrament today, I would beg you to consider making the sacrifice of receiving Jesus worthily, kneeling and on the tongue.