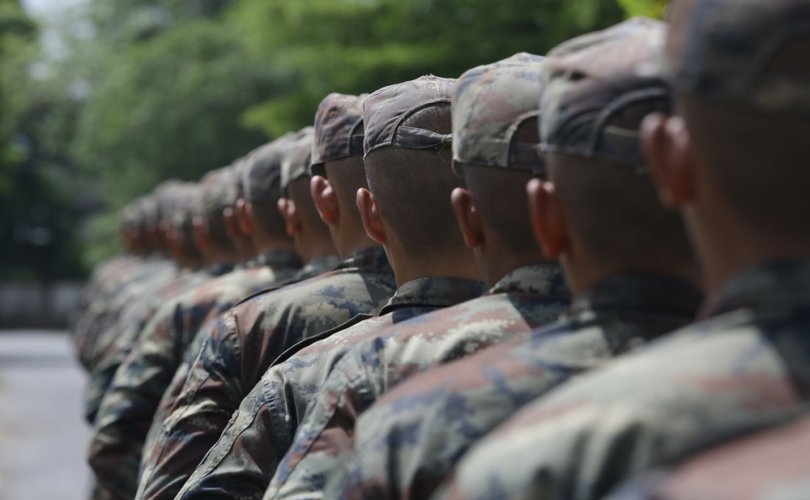 May 18, 2020 (LifeSiteNews) — In 2017, President Donald Trump released a statement on Twitter announcing that he would re-instate a ban on people diagnosed with gender dysphoria from military service, a reversal of an Obama policy that would have permitted transgender people to serve openly in the various branches of the military (even while pursuing medical “transition”). The following year, then–secretary of defense James Mattis rolled out the details of the policy, and a battle among various branches of government began, with the Supreme Court permitting the ban to go into effect in 2019 while the Democrats in Congress voted in June of the same year to prevent the Pentagon from using any funds to put the ban into effect.

The issue has ping-ponged its way through the courts, with injunctions by judges in three separate cases being eliminated by the Supreme Court’s decision to allow the ban as well as a ruling by a federal judge in Maryland. The Trump administration has claimed that the path is now clear for the ban to be enforced, but federal judge Colleen Kollar-Kotelly of the United States District Court for the District of Columbia has responded by stating that the injunction she issued in a 2017 ruling that the military must admit transgender applicants still stands.

It appears that in practice, at least, Kollar-Kotelly’s injunction is sidelining the Trump policy. The Pentagon admitted in February of 2018 that despite the ban, the first transgender person had signed a contract with the military. Additionally, CNN is reporting this month that a waiver has been granted to a transgender member of the military permitting the member to serve “in their preferred gender.”

According to Navy spokeswoman Lt. Brittany Stephens (speaking to CNN): “The acting Secretary of the Navy has approved a specific request for exemption related to military service by transgender persons and persons with gender dysphoria[.] … [T]his service member requested a waiver to serve in their preferred gender, to include obtaining a gender marker change in (the Defense Enrollment Eligibility Reporting System) and being allowed to adhere to standards associated with their preferred gender, such as uniforms and grooming.”

The anonymous naval officer had been represented in a lawsuit filed against the ban in March by the GLBTQ Legal Advocates & Defenders as well as the National Center for Lesbian Rights. The director of GLAAD’s Transgender Rights Project, Jennifer Levi, also released a statement: “While we are relieved that our client, a highly qualified Naval officer, will be able to continue her [sic] service, there are other equally qualified service members who have sought waivers and are still in limbo despite being perfectly fit to serve.” According to GLAAD’s press release: “The fight is far from over.”

The LGBT movement has long seen the American military as an essential battleground in its fight to transform the nation. The Armed Forces is perhaps one of the final institutions that still unites Americans, with members of both primary political parties paying the troops homage and respect at every opportunity. Bestselling author Stephen Mansfield, who wrote The Faith of the American Soldier after embedding with troops in Iraq during Operation Iraqi Freedom, told me in an interview that many chaplains are beginning to feel squeezed as LGBT activists successfully implement their agenda. The soldiers feel the tension as well, Mansfield told me — there is now the feeling that standards of political correctness can end a promising military career over an ill timed joke.

“When a huge portion of time is spent in sensitivity training and so on — why, for example, would the gay flag need to be raised over a military base? — this is an experiment,” Mansfield told me. “This is trendiness. This is an attempt to force upon the military, which is under state control, a level of political correctness that is meant to radiate around the country. I have to tell you that those in uniform resent this, because if they’re in the military, what they want to be is proud, competent, and strong, and part of an amazing fighting force that does good in the world. That’s why they’re there. If they wanted to deal with the latest trends in political correctness, they could have stayed in a university setting. They could work in government. They could form an NGO and advocate for a cause. That’s not why they’re carrying a weapon or learning how to fly or knowing how to do munitions. That’s not what they’re there for.”

To the LGBT movement, of course, it doesn’t matter whether or not the agenda is welcome. What matters is whether they can force its implementation.