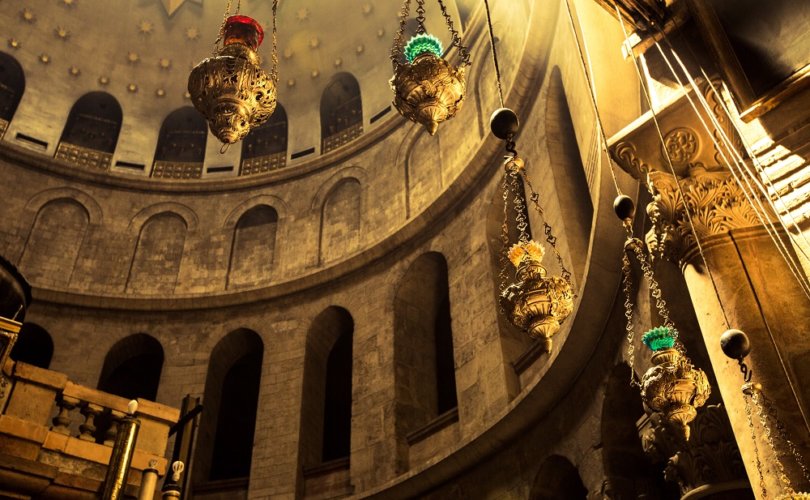 Greek Chapel of the Church of Holy Sepulchre in Jerusalem, Israel.Anton Sterkhov / Shutterstock.com

May 28, 2020 (LifeSiteNews) — As we prepare to celebrate the great feast of Pentecost — a feast so great in the eyes of the Church that it was celebrated for eight days (i.e., as an octave) in the Latin rite of the Catholic Church going back to the late sixth century, a custom that continues today wherever the ancient form of the Roman rite is used — we would do well to ponder what the gift of tongues signifies and what it does not signify.

A friend once told me he had expressed his love of the traditional Latin Mass to a certain deacon, who countered in a huff: “Pentecost shows that the apostles spoke to everyone in their own language — and it wasn’t Latin.” This liturgical misinterpretation of Pentecost, which one hears now and again in different forms, deserves a rejoinder.

1. What the Acts of the Apostles shows is that the apostles preached to the people in many languages. There is nothing in the Pentecost story about worship in the temple or synagogue, or the Eucharistic liturgy and the Divine Office that developed out of them and supplanted them. And as far as I know, it’s always been the custom to preach in the vernacular at Latin Masses, except in highly specialized academic contexts. The gift of tongues is a gift for the sake of evangelization, apologetics, and catechesis — not specifically for liturgical worship.

2. Pentecost is shown in Scripture as a reversal of the tower of Babel. The original curse of ambitious man was to divide his progeny into a thousand languages. The rich poetic fruits of multiple languages can be counted a blessing willed by God, but the difficulty and often impossibility of a common discourse among rational animals is a curse. This curse is renewed whenever we are confronted with a liturgy in which the use of some vernacular that is foreign to us effectively says: “This is not for you; it’s only for them, for that demographic.”

When liturgical traditions develop a common language of public worship, it is a symbolic return to the prelapsarian condition of the Garden of Eden, when human beings would have spoken only one language. In the Latin liturgy, we are not confronted with a foreign vernacular that excludes us; rather, we hear the sound of a single voice that belongs to the Church at prayer, welcoming all nations and peoples into one celebration.

Yes, liturgical Latin is “strange” in the sense that it is not something everyday, familiar, easy, at our level or at our disposal; it evokes the transcendence and majesty of God, the universality of His kingdom, the age-old depths of the Faith. But over time, we identify this set-apart language as a sign of honor, we experience it as a promoter of reverence, and we find in it an invitation to prayer. When we dive into a pool, the moment we hit the water, we know — not just rationally, but viscerally — that we are in a new medium and we must swim. So too when we hear the Latin chant or recited prayers, we know we are in a new medium and we must pray.

3. Dr. Joseph Shaw points out that the custom of employing a sacred language is already familiar to us from salvation history:

The tradition of Gregorian chant goes back to the Temple in Jerusalem, where we are told professional singers were employed (2 Chron 5:15); the use of Latin recalls the use of Hebrew as a sacred language, when the language of the Jewish people had become Aramaic; the traditional liturgy’s emphasis on priest, altar, and sacrifice is redolent of the atmosphere of ancient Jewish worship, something sometimes noted by Jewish converts[.] …

As Jews, they [the Apostles] were brought up to pray and sing the Psalms in Hebrew, as well as in their mother tongue. No word of criticism of sacred languages is to be found in Scripture, and the earliest liturgies were by no means composed in the language of the street. In Greek-speaking areas, the Church was able to employ the sacred register created by the Septuagint translation of the Bible: a distinct form of Greek already two centuries old and filled with Hebraisms. Latin liturgy did not emerge until Latin translations of the Bible had created something equivalent, and, when it did, we find a liturgy in a sacred Latin with a specialized vocabulary, replete with archaisms, loan-words, and other peculiarities; similarly, liturgical Coptic is an archaic language larded with Greek terms and written in Greek letters. As for Church Slavonic and the language of the Glagolithic Missal, their origins and history are not reducible to the simple idea of the “language in use at the time,” and, in any case, they quickly become liturgical languages for people not able to understand them. They remain culturally connected to the peoples they serve, but not readily comprehensible by them.

We see, in fact, that every ancient Christian church developed a sacral language and idiom for worship: the Greek Orthodox Church still uses koine Greek, the Russians use Church Slavonic, the Ethiopians use Ge’ez, the Copts use literary Coptic, etc. This is not just a Western or Roman phenomenon.

4. Our native language, our “mother tongue,” comes from our earthly mother: when we are living inside her womb, her voice is the first we hear, and when we come forth into the world, we hear the same voice upon her breast. Our everyday vernacular is something we are, in a sense, equipped with by nature, by effortless immersion in the family culture. This language represents the natural order in which we live and move and have our natural being.

Now, even as baptism or rebirth comes to the Christian from outside (for, as Joseph Ratzinger writes, “nobody is born a Christian, not even in a Christian world and of Christian parents. Being Christian can only ever happen as a new birth. Being a Christian begins with baptism, which is death and resurrection, not with biological birth”), so, too, the sacral language in which we worship comes to us from outside, from Holy Mother Church, who teaches us a new Christian language — a spiritual “mother tongue” — which represents the supernatural order in which we live and move and have our supernatural being. Latin-rite Catholics have a sacral language that comes to them “from outside,” just as baptismal rebirth does.

The Christian liturgy should somehow convey to us that, when we enter the Lord’s temple, we are speaking not with a merely natural speech, but with a supernatural speech, a language of saints, angels, and God. Obviously, this language does not have to be Latin — as noted above, there are many sacral languages used in traditional apostolic rites — but it should not be the everyday vernacular of the hearth and the marketplace, or even the technical speech of academic disciplines. It should be set apart by centuries of use consecrated to divine worship; in this way, it helps worshipers to set aside earthly cares and consecrate symbolic portions of our time to God alone.

A traditional liturgical language is a reminder that our supernatural adoption into the family of God is more fundamental and more ultimate than any earthly family, citizenship, nation, or race.

5. Most importantly, something the Catholic Church in the West has practiced for over 1,600 years — something that nearly all of our thousands of canonized saints personally practiced — cannot be condemned without denying that the Holy Spirit has been guiding the Church into the fullness of truth (cf. Jn. 16:13).

The Holy Spirit who gave linguistic utterance to the apostles as they preached to all the nations also gave liturgical Latin to the Western Church as her inheritance, handed down from century to century with ever-increasing veneration. What was established by choice was confirmed by custom and preserved by piety. The forms of worship developed over centuries with a richness of content and texture that made it increasingly unlikely that it could ever be readily duplicated in or adapted to a foreign idiom; this made it all the more precious and worthy of cultivation. Against the backdrop of experiments in vernacularization from the mid-twentieth century onward — experiments that could be called, with more justice, Babelization — an ever-increasing number are coming to see that this unique and unitive Latin heritage remains precious and worthy of cultivation today.

In the end, the right kinds of unity and the right kinds of diversity are all gifts of the Holy Spirit, whose singular coming in full force upon the Church the Roman Rite celebrates in eight days of rejoicing and in several months of “Sundays after Pentecost.” In the midst of cultural diversity, the Catholic Church has had the wisdom to recognize the spiritual power of central elements of unity that bring us together in confessing the one true Faith. We can only hope and pray that Church leaders will, over time, recover some of what was foolishly squandered by shortsighted reformers.

(Readers who appreciated this article may also wish to read my earlier article “Why Latin is the correct and fitting language of the Roman Catholic liturgy.”)