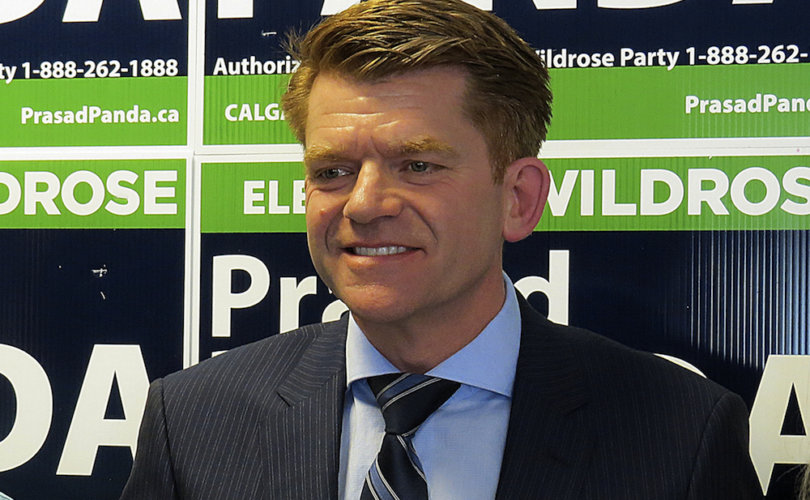 September 15, 2017 (LifeSiteNews) — My column earlier this week detailing Brian Jean’s statements on social conservatives has clearly struck a chord — it was only up for a half hour when Jean staffer Vitor Marciano responded by tweeting, “How idiotic. Brian did his highschool at Prairie Bible and is a church going Baptist.” The Brian Jean Campaign then posted a comment on the article, probably written by Marciano as well:

How idiotic a post. Stop telling lies.
-Brian Jean did his high school as a boarding student at Prairie Bible Institute in Three Hills Alberta. He remains a financial supporter of the school.
-He participated in various programs at Capenwray.
-His first university degree was from Warner Pacific College, a Christian liberal arts college.
-His family was instrumental in setting up the Northlife Fellowship Baptist Congregation that he attends

The provincial NDP and several newspapers picked up on the story after LifeSiteNews reprinted the column with the headline “Christians must not allow this man to lead Alberta’s new conservative party,” and Brian Jean himself released a statement on his Facebook page, accompanied by a video of Jean sitting in his homey kitchen, with altar call music playing indiscreetly in the background:

It’s unfortunate that the discourse in this leadership race has devolved to this point, but a recent shadow campaign questioning my personal faith has emerged.

I’ve never been shy to acknowledge my faith and Christian beliefs. I’m a church-going, God-fearing Baptist; I did my highschool at Prairie Bible College in Three Hills – I have never been accused of being anti-Christian before. It is deeply disappointing – even the NDP hasn’t stooped as low as to attack my faith.

Now while personal faith is important to me, I don’t expect everyone to agree with me, nor would I ever ask them to.

This is a race to lead the United Conservative Party. And while some may want to use religion as a way of dividing our party, I refuse to engage in that kind of rhetoric.

Whether you’re Christian, Catholic, Jewish, Hindu, Muslim, Sikh, Buddhist, or altogether agnostic, I want you to have a seat at the table in this party. I want this party to protect the rights and freedoms – including religious freedoms – of ALL Albertans.

If we as conservatives are to succeed in defeating the NDP in the next election, I believe we must reject the kind of labels that lead to division. My focus is on implementing solid conservative policy and principles to get our province back on track to prosperity. I will not waiver from that commitment.

The statements by the Jean campaign in response to my column are very, very indicative — and, in fact, they prove my point. Brian Jean did not attempt to rebut anything I actually wrote, especially since I quoted him directly saying that people who believe in the traditional Christian definition of marriage have no place in his party, or in “any party.” Nobody has to take my word for it — it’s right there on video. So instead of defending or retracting his comments on social conservatives, Jean instead decided to play the victim, claiming that there is a “shadow campaign questioning my personal faith.”

That’s clever. Nobody actually questioned Jean’s faith — just read the column. I don’t particularly care about whether Jean goes to church, or that he’s a Baptist, or that his parents sent him to a Christian school. I do, however, care very much that Jean has stated that people who oppose same-sex “marriage” have no place in his party — and I assume that would include a lot of “God fearing Baptists,” as well. Brian Jean marched in the Pride Parade, so he obviously sees no conflict between his religious beliefs and society’s new moralities. But he can’t possibly be dumb enough not to realize that the vast majority of Christians hold to the same belief that has been upheld by Christianity for the last 2,000 years — and that when he says people like that are “hateful” and “don’t belong in my party,” he’s talking about them.

Brian Jean is saying that he welcomes social conservatives in the United Conservative Party only because he needs to win a leadership race. He’s on the record in many, many media interviews announcing what he’ll do to social conservatives should he actually win and pivot to focusing on a general election: “What do we do with them? Well, at first, we can try to manage them and then we get rid of them. That’s the truth of it. Albertans need to be able to trust us. When they see our reaction it will be quick. It will be ruthless. It will make sure Albertans know they can continue to trust us and know we’re not some little gang of crazies.”

That seems pretty clear to me. It also seems obvious by the response of Jean and his campaign that they would like everyone to forget about these comments for a little while, because their response has been to say, “But Brian is a Baptist and goes to church!” So, what? That’s not relevant to the issue at hand: That Brian Jean believes, and has said, that social conservatives — especially those who choose to vocalize their beliefs — are “nutbars” who have no place in the broader conservative movement.

So, Mr. Jean. Nobody is questioning your faith. I’d wager that most people don’t really care. But since you feel the need to respond to this “shadow campaign” — actually just a single published column that over a thousand people have shared, many of them having decided to withdraw their support from you as a result — how about addressing your on-the-record comments about social conservatives to the media? Do you think those who believe in the traditional Christian institution of marriage have any place in your party? What if they say so out loud? Why should they trust you, considering that you say one thing to journalists and another thing entirely when you’re attempting to avoid clarifying those comments?

A lot of people would like answers, and your little pivot isn’t satisfying any of us.