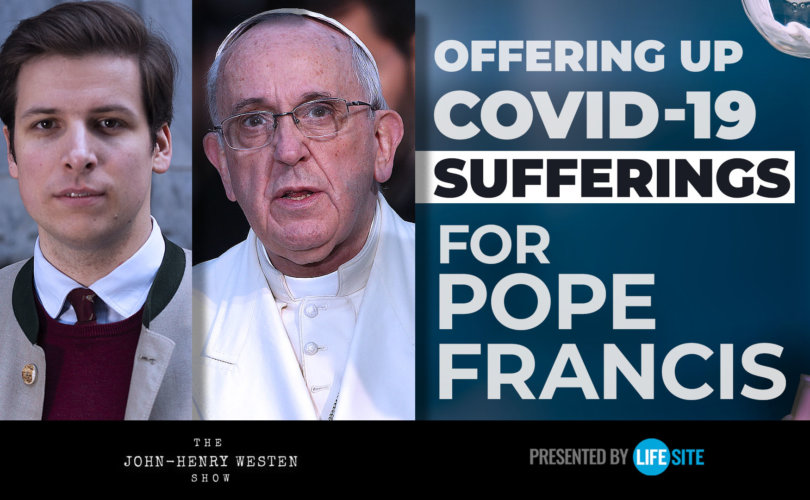 April 7, 2020 (LifeSiteNews) – Today, I had the great pleasure of speaking with my friend Alexander Tschugguel about his recovery from the coronavirus. Alexander, as you know, threw the Pachamama idol into the Tiber River during the Amazonian Synod.

When news broke that he contracted the coronavirus, everyone here at LifeSite joined in prayer, begging God to protect this young, stalwart defender of the faith. Those prayers were answered, but Alexander had to endure plenty of suffering before his restoration

Alexander said that his symptoms were similar to what everyone else afflicted by COVID-19 is experiencing — fever, chills, a dry cough, and the inability to smell and taste. He also had “very strange dreams” that were in black and white.

A doctor came to his home at first but it eventually got to a point where he needed to go to the hospital. He tried to pray but it was difficult to concentrate. While at the hospital, he received a treatment that was intended for HIV patients and after a week or so he began to feel better. His pneumonia cleared just recently.

Being the faithful Catholic that he is, Alexander asked God to tell him why and for whom he was suffering. “One of the main points about Catholicism,” he told me today, “is to suffer.”

Alexander said it was made clear to him that while he was sick in the hospital that it’s “really important to pray for” the Pope right now and to offer up sufferings for him, which he did.

Alexander said Catholics need to “carry our cross. We must deny ourselves…[God] gives us crosses but [also] all the graces needed to get through it.”

Alexander and I also spoke about how there are so few public Masses taking place across the world and that Catholics are in agony about not being sacramentally close to Our Lord.

Alexander pointed out that this is not without historical precedent, as many Christians were thrown in prison in Russia and that they endured extremely difficult situations without access to the Mass.

He also made note of the fact that in 1679 during the Great Plague in Vienna one convent of Franciscans administered the sacraments more than 30,000 times to the city’s inhabitants. That puts today’s bishops to shame, he argued. And I agree!

Alexander and I closed our conversation by talking about the sinister efforts being undertaken by those who want a one-world government and who are using this crisis to restrict our freedoms and try and put microchips and questionable injections into our bodies.

“Globalism is the reason why it has spread,” Alexander told me today, pointing to the fact that European countries don’t make their own medicines or healthcare equipment anymore. “They have to import it from China because nothing is produced in Europe anymore…globalism pushed out many, many things…We need sovereign states.”

Alexander suggested Catholics should spend their time in quarantine with family and to encourage their children to pray. But, he added, Catholics should also contact politicians and make their voice heard by signing petitions when possible. “Don’t start doubting God, trust God…stay Catholic, use the old prayers, prepare for Easter,” he said.