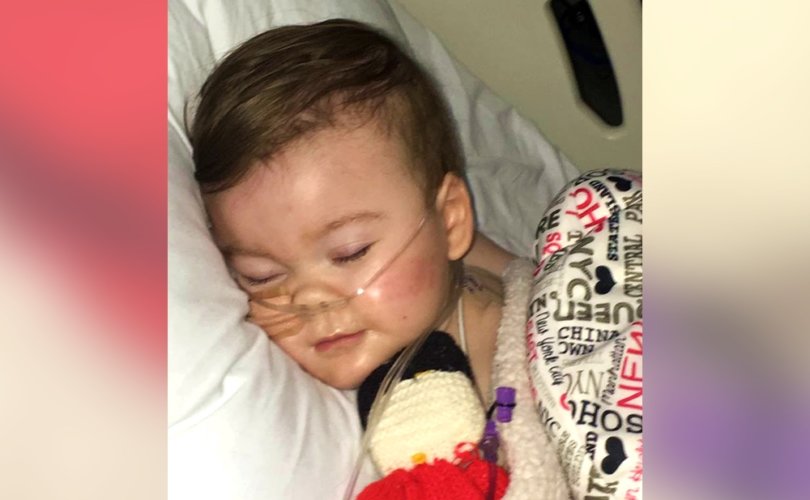 April 30, 2018 (LifeSiteNews) – As most of you will already know, Alfie Evans passed away in Alder Hey Children’s Hospital during the early morning hours of April 28, ending a bitter battle between his parents, Alfie’s doctors, the British court system over who had the right to determine the little boy’s treatment.

The parents had sought permission to take their son to Italy, and the Hospital had refused, saying that further treatment was not in Alfie’s “best interests.” Alfie had been taken off the ventilator that doctors had said was necessary to save his life on Monday, but the boy had instead begun breathing on his own. He was twenty-three months old when he died.

Alfie’s story is both inspirational and infuriating. Inspirational, because the little boy clung to life with a tenacity that attracted attention from around the world. Infuriating, because it is so hard to understand why the Alder Hey Children’s Hospital could not simply have allowed Alfie to be transferred to a hospital that was more than willing to take him—but instead fought with the parents in court, insisting that their judgment should override that of the parents.

But in the midst of all of these details—I won’t rehash them all, as many of you are no doubt already familiar with them—the story of Alfie Evans may be remembered as a cultural watershed moment. Let me give a few reasons for that bold assertion.

My heart goes out to Alfie’s parents and family, who fought so long and so hard for their little boy. I hope they realize that they became role models for what it looks like to be a self-sacrificing parent willing to do anything for their child. They did everything they could think of to defend Alfie, and not because of anything he could do for them. They did it because Alfie was theirs, and that was all that mattered. The story of Alfie Evans showed the world what it looks like when parents love their children no matter what, that all lives are precious, and that every child should get a chance to live—and that every child’s parents should fight for that right.

When you look at it that way, the sad story of Alfie Evans is also inexpressibly beautiful.