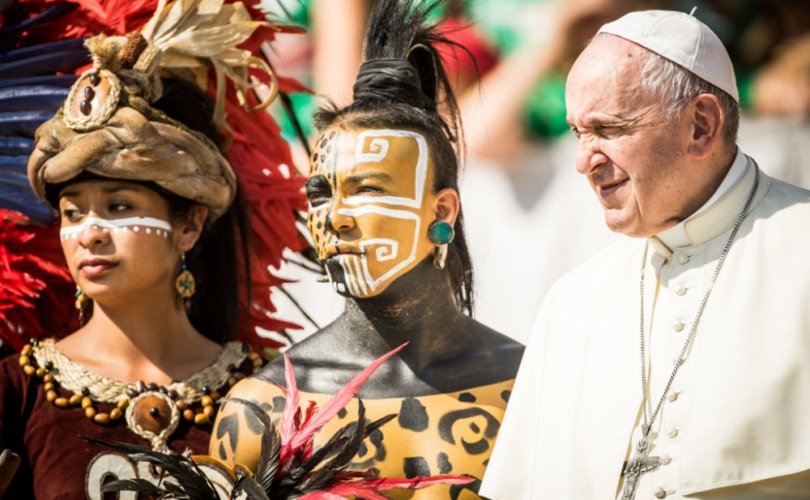 November 8, 2019 (LifeSiteNews) — This is, I promise you, my last word on the sacrileges committed during the Amazon Synod. Truth be told, I find thinking about serial insults to Our Lord, His churches, His altar and His sacrifice that occurred during those few weeks almost unbearable.

It is bad enough that there was a pagan ritual held in the Vatican gardens under the guise of a tree-planting ceremony. It is even worse that the pagan idols worshiped there were allowed into the sacred precincts of several of Rome’s churches, misrepresented to the faithful as mere “symbols” of “Life, Fertility, and Mother Earth.”

But to my mind the worst insult to Our Lord Jesus Christ occurred when, during the closing Mass of the synod, a pagan offering to the Pachamama “earth goddess” was placed on the high altar of St. Peter’s itself. What was an unholy offering to a pagan deity doing on an altar where the Holy Sacrifice of the Mass was being celebrated?

We’ll talk about what faithful Catholics should do in a moment, but let’s first dig a little deeper into each of these outrages.

Much has been written about the disturbing shamanistic ritual that was carried out in the Vatican gardens, but a couple of details have been overlooked, including Pope Francis’s role in the ritual.

The ritual was presented as a “tree-planting ceremony” celebrating St. Francis of Assisi’s love of nature, but this was just a smokescreen. During the course of the ritual, Pope Francis received and blessed a Pachamama idol and was given a pagan necklace, an offering of soil to Pachamama, and a Tucum ring.

The Tucum ring is a black wooden ring made from an Amazonian palm tree. It is often taken to symbolize a commitment to Liberation Theology, a Marxist distortion of the Faith that emphasizes liberation from poverty over liberation from sin.

But in shamanistic Pachamama rituals, such as the one conducted in the Vatican gardens, it has a deeper and darker meaning. Here a gourd rattle and occult spells are used to direct demonic energy to the Tucum, which comes to represent a spiritual marriage with the “earth goddess” or demon.

In the Vatican News video recording the ritual, the shamaness can be seen empowering the Tucum with occult spells and her gourd rattle beginning at 11:00. She then approaches the pope and puts the black ring on what appears to be the ring finger of his left hand at 12:50.

Just before that, the shamaness had folded a pinch of the soil from the offering bowl to Pachamama into the pope’s left hand and then touched clenched fists with him in some kind of communal gesture.

When asked to explain these strange happenings, the Vatican retreated into silence. For faithful Catholics, this is simply unacceptable. We are practitioners of a very physical religion, who understand that the images, scents, sounds, and even gestures used in our worship services are all freighted with holy meaning.

In the same way, we instinctively understand that the images, chants, and gestures used in pagan rituals are laden with unholy — that is, demonic — meaning.

I have written about the Pachamama idol here, pointing out that the cult of the “earth goddess” — or demon — is alive and well in the remote reaches of the rainforest, where animal and even human sacrifice is still practiced. Infanticide is still common among the Yanomami and other Amazonian tribes, and children born handicapped are said to lack a soul and are often sacrificed.

The organizers of the Amazon Synod, who tell us how much they admire the “wisdom” of the indigenous inhabitants of the rainforest, surely know that Pachamama is more than a symbol to these peoples.  By honoring the “earth goddess” in this way, they are actually strengthening her cult, which extends from the depths of the Amazon to the peaks of the Andes, as Father Mitch Pacwa has pointed out.

Although the Pachamama idols themselves were not brought into St. Peter’s for the closing Mass, reportedly because several African bishops promised to boycott the proceedings if they were, an offering to Pachamama was brought in by a woman in Amazonian tribal dress. She can be seen leading that procession into St. Peter’s at 23 seconds into the video of the closing Mass.

It is impossible to know what the soil contained in this case, but what it signified is not in question. Such a Pachamama offering is intended as an act of reparation to the “earth goddess” for the “sins” that human beings have committed against “her” by taking from “her” the fruits of the earth — animal, vegetable, and mineral.

In other words, it is the exact pagan imitation of the body and blood of Jesus Christ that are daily offered up on the altars of hundreds of thousands of churches during the Holy Sacrifice of the Mass in reparation for the sins of the world.

Such a pagan Pachamama offering has no place in a Catholic church, and yet not only was it brought into St. Peter’s at the very head of the procession, but it was placed on the high altar itself.

As Robert Moynihan first reported, during the offertory, the Amazonian woman hands the Pachamama offering to the pope (video at 56:30). The pope then turns to Guido Marini, speaking to him as he hands over the offering (56:40). Marini immediately turns and places the Pachamama offering on the right corner of the altar, where it remains throughout the Mass (56:45).

As if to further emphasize the presence of the Pachamama offering on the table of Our Lord, the video itself closes by focusing on it for about 12 seconds (1:32:38) before closing with a brief shot of the cross above the baldacchino.

Most Catholics are aware that in the Novus Ordo, while money or other gifts for the poor or for the Church may be brought forward during the offertory, they are not to be placed on the altar. As the General Instruction of the Roman Missal outlines:

At the beginning of the Liturgy of the Eucharist the gifts, which will become Christ’s Body and Blood, are brought to the altar. … It is praiseworthy for the bread and wine to be presented by the faithful. … It is well also that money or other gifts for the poor or for the Church, brought by the faithful or collected in the church, should be received. These are to be put in a suitable place but away from the Eucharistic table. (Para. 73)

Seeing these insults offered to Our Lord and Savior, Jesus Christ, PRI’s Chaplain, Father Linus Clovis, reminded me of the tocsin that Pope Paul VI sounded on the 60th anniversary of the Miracle of the Sun at Fatima.

As the Corriere della Sera reported, in that October 13, 1977 address, the pope warned:

The tail of the devil is functioning in the disintegration of the Catholic world. The darkness of Satan has entered and spread throughout the Catholic Church, even to its summit. Apostasy, the loss of the faith, is spreading throughout the world, and into the highest levels within the Church.

The pope’s words may have seemed a little melodramatic to those listening in 1977, but it is today difficult to deny the truth — indeed, the literal truth — of Pope Paul VI’s assertion.

I believe that it is safe to say that millions of Catholics around the world were shocked and distressed by the scandal of the Amazon Synod, and especially by the presence and veneration of pagan idols in the Vatican garden, in Rome’s churches, and in the papal presence.

Even more disturbing to many of us, though, was the sight of an offering to the Pachamama idol being placed on the high altar of St. Peter’s Basilica itself.

What was a (bloody?) sacrifice to a pagan goddess doing profaning the same altar upon which the unbloody sacrifice of Our Lord for the remission of our sins was being celebrated?

Was it intended to suggest that Our Lord’s sacrifice was somehow incomplete and that we Catholics somehow need to propitiate “Mother Earth” as well for our sins against the environment? Such a proposition would be rank heresy.

Whatever it was supposed to signify, I see it as tangible evidence that, as Pope Paul VI feared, “the smoke of Satan has entered the temple of God.” Indeed, the darkness and confusion that smoke casts have apparently even reached the high altar of the principal basilica of the Universal Church.

An insult has been offered to Our Lord and Savior, Jesus Christ, for which reparation must be made.

We at PRI, led by our chaplain, Fr. Linus Clovis, have already begun offering Masses for this intention.

To Jesus Christ, Our Lord and God, be all honor and glory, forever and ever.

Steven W. Mosher is the president of the Population Research Institute and the author of Bully of Asia: Why China’s Dream Is the New Threat to World Order.