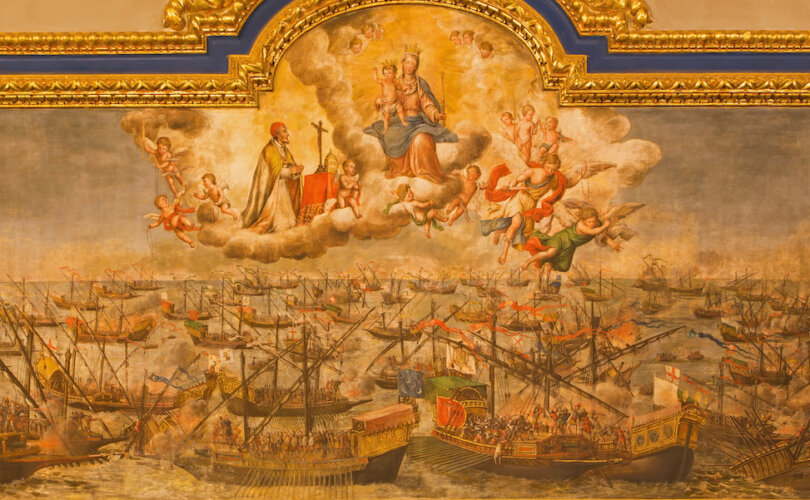 (LifeSiteNews) – America and the Catholic Church are in grave peril and need nothing less than God’s most powerful weapon.

In the United States, a regime of criminals and perverts has taken over the federal government and is hellbent on sexually indoctrinating children, codifying unrestricted abortion, and abolishing religious freedom as we know it. Basic order is collapsing in Democrat-controlled states and at the southern border, and the economy – flourishing under Republican rule a few years ago – is on the brink of disaster.

The situation in the Church is similar. Cardinals and bishops openly proclaim heresy against fundamental theological truths and sexual morality, desecrate the Eucharist, and collude with enemies of the Faith, including Communists, pro-abortionists, and homosexuals. The Pope and the Vatican not only fail to censure these prelates but promote them and join their impiety while launching brutal attacks against faithful clergy and laity.

It is a historically, perhaps unprecedentedly, dire time for the Church and the country.

But God has given us a spiritual weapon for just such situations: the Rosary.

Originally given by the Blessed Virgin to St. Dominic to convert the Albigensian heretics, the Rosary has won seemingly impossible victories against the armies of Hell for centuries.

The Albigensians – Neo-Gnostics who relentlessly attacked marriage and life, much like today’s liberals – found widespread support in France in the 12th and 13th centuries, threatening the future of the Church in Western Europe. Outnumbered crusaders struggled to rout the heretics – until they had recourse to the Rosary:

The crusaders, a mere 800 men led by Simon de Montfort, spent the night praying the Rosary for victory under the direction of Saint Dominic, and in the morning all went to confession and Holy Communion. The opposing armies, numbering over 20,000, indulged in a night of drunkenness and debauchery. The next morning, Simon de Montfort divided his cavalry into three and rushed on the disorganized bands of heretics. The rout was completed in less than 20 minutes, and thousands of the heretical sympathizers met their end on the battlefield. The Battle of Muret marked a decisive victory and ended the territorial expansion of Albigensianism. With the preaching of the rosary, this dangerous scourge on the Church was soon wiped out.

Our Lady later revealed to Blessed Alan de la Roche the incredible effects that the Rosary had on lands once dominated by Albigensian heresies:

Through the Rosary, hardened sinners of both sexes became converted and started to lead a holy life, bemoaning their past sins with genuine tears of contrition. Even children performed unbelievable penances; devotion to my Son and to me spread so thoroughly that it almost seemed as though angels were living on earth. The Faith was gaining, and many Catholics longed to shed their blood for it and fight against the heretics. […] People led moral and law-abiding lives and worked wonders for the glory of God. Holiness and unworldliness flourished; the clergy were exemplary, princes were just, people lived at peace with each other and justice and equity reigned in the guilds and in the homes.

The power of the Rosary has achieved other miraculous successes, including the legendary Battle of Lepanto in 1571, which saved Christendom from the Muslim Turks. The Catholic forces of the Holy League, arranged by Pope St. Pius V, prepared themselves before the battle “by falling to their knees on the decks of their galleys and praying the Rosary.” Meanwhile, in Rome and “up and down the Italian Peninsula, at the behest of Pius V, the churches were filled with the faithful telling their beads.”

The Catholics and Turks “were evenly matched and well led,” Catholic Answers president Christopher Check recounts, “but the Divine favored the Christians, and once the battle turned in their favor it became a rout. All but 13 of the nearly 300 Turkish vessels were captured or sunk and over 30,000 Turks were slain.”

St. Pius V instituted the feast of Our Lady of the Rosary in commemoration of the victory. The saintly pope noted that the Rosary has “often defeated the enemies of the Church. Rightly, therefore, we must hope that the same power will repulse the errors of hell, will annihilate the machinations of godlessness, will remove from the people the errors that have been propagated and, with it, the great upheaval that convulses all mankind.”

The Rosary, in fact, has won so many victories against heretics that it can rightly be called “the anchor of salvation for society,” according to Blessed James Alberione, the founder of the Society of St. Paul.

“The Rosary of Mary is the great lever, it is the anchor of salvation for society and for individuals. Lepanto and Vienna are names associated with the Rosary. The victories over the Albigensians, over French philosophies, over liberalism and modernism find their explanation in the Rosary,” he wrote. “Through it many sinners have been converted to God; through it love of God and of His Mother has bloomed anew.”

The great saints and popes, as well as Our Lady Herself, have continued to stress the unique efficacy of the Rosary throughout modern times.

The Blessed Virgin repeatedly told the children of Fatima “to pray the Rosary every day.” Padre Pio called the devotion “the weapon that wins all battles” and “the weapon against the evils of the world today.” The Hail Mary, together with the contemplative prayer of the Rosary meditations, is “the most powerful weapon ever placed in the hands of man,” declared Venerable Fr. Patrick Peyton.

Pope St. Pius X considered the Rosary powerful enough to save the world: “If there were one million families praying the Rosary every day, the entire world would be saved.” “The Rosary is the most beautiful and the most rich in graces of all prayers; it is the prayer that touches most the Heart of the Mother of God,” he said.

Pope Pius XI also recalled: “When, in fact, errors everywhere diffused were bent upon rending the seamless robe of the Church and upon throwing the Catholic world into confusion, our fathers turned with confident soul to her ‘alone who destroys all heresies in the world’ (Roman Breviary), and the victory won through her brought the return of tranquility.”

Venerable Pope Pius XII likewise urged Catholics in his day to “put great confidence in the Holy Rosary for the healing of evils which afflict our times. Not with force, not with arms, not with human power, but with Divine help obtained through the means of this prayer, strong like David with his sling, the Church undaunted shall be able to confront the infernal enemy.”

And Pope St. John Paul II reaffirmed in 2003: “The Church has always attributed particular efficacy to this prayer, entrusting to the Rosary, to its choral recitation and to its constant practice, the most difficult problems. At times when Christianity itself seemed under threat, its deliverance was attributed to the power of this prayer, and Our Lady of the Rosary was acclaimed as the one whose intercession brought salvation.”

He identified the Rosary as a spiritual weapon in the fight for life, and entrusted the cause of the family, “increasingly menaced by forces of disintegration on both the ideological and practical planes,” to its power.

The Rosary has achieved miracles in recent years: In 2016, soon after Nigerian Bishop Oliver Dashe Doeme called on Catholics to pray the daily Rosary to defeat Boko Haram, the Nigerian army pushed the radical Islamic group almost entirely out the region. Bishop Doeme attributed the success to Rosary, noting a vision he had in which Christ gave him a sword that turned into a Rosary and said, “Boko Haram is gone.”

As the month of the Most Holy Rosary winds down and with the U.S. midterm elections days away, let’s entrust the crises in our nation and the Church to Our Lady through Her Rosary, confident that She will obtain victory yet again.