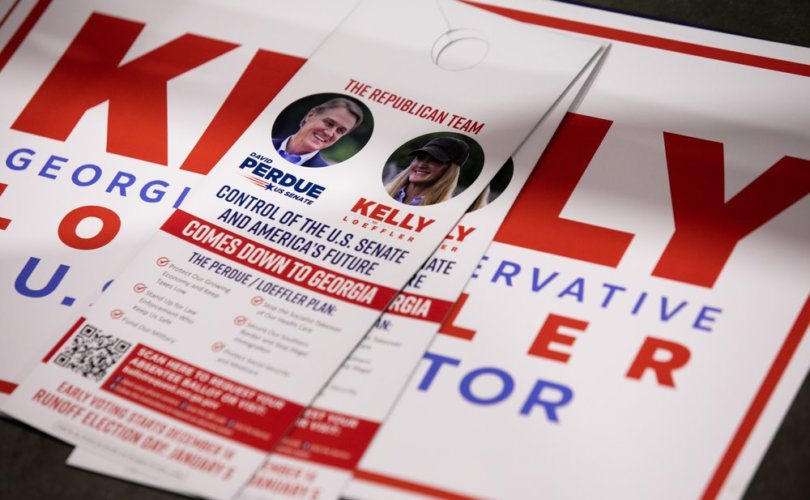 December 1, 2020 (LifeSiteNews) – To say America’s future is in a precarious position would be the understatement of the year. The only thing standing between Joe Biden and the White House is whether or not Donald Trump’s lawyers can convince enough judges that tens of thousands of votes across multiple states were fraudulent and should be tossed. Should those lawsuits fail, the only thing standing between the Biden administration and generations of national left-wing dominance will be a Republican Senate – control of which rests on David Perdue and Kelly Loeffler winning the January 5 runoff elections.

It’s bad enough that giving Biden a Democrat Congress would unleash legislation to codify Roe v. Wade and write transgender conformity into federal law, among countless other horrors. But the real danger is that if Loeffler and Perdue lose, the vote fraud suspected in last month’s elections will be nothing compared with how fully Democrats rig the system against us going forward.

Court-packing will stack the federal judiciary with unelected leftists for life, tying conservatives’ hands as never before. Granting statehood to Washington, D.C. and Puerto Rico would permanently increase Democrats’ Senate power by four seats. The legislative filibuster’s days would be numbered. And amnesty for illegal immigrants would transform the electorate such that conservatives would never win another national election in our lifetimes.

Alarmingly, however, there is a vocal minority on the conservative side sowing division about the runoffs, just when conservatives need unity more than ever – a sentiment spreading across social media that turning out to vote in January is futile, unimportant, or even wrong. Not everyone pushing this sentiment does so for the same reasons, but they would all lead to the same place: disaster.

One of the main justifications for this stance is perfectly-understandable disdain for the Republican establishment, a desire to punish them for the various betrayals and derelictions that brought the country to this point. The most prominent representative of this view is American Greatness senior contributor Julie Kelly, who writes that it’s “pure folly to think this Republican Senate will act as a bulwark against a Biden-Harris Administration.”

She details various examples of various Senate Republicans, from Senate Majority Leader Mitch McConnell on down, either siding with or failing to resist the Left. All of her examples are true, all of them are damning, but none of them demonstrate that any Senate Republican will suddenly support court-packing, ending the legislative filibuster, or adding new states to the Union.

Selling out on any one of those three items would require deliberate action on the part of questionable Republicans (as opposed to sins such as passivity on the Russia hoax), and would be far more radical, and harder to explain away back home, than the deliberate actions she cites (like pandering to the prevailing narrative about George Floyd’s death) – which may be why Kelly doesn’t mention court-packing, the filibuster, or D.C. or Puerto Rican statehood anywhere in the piece.

Granted, she’s on stronger footing when she warns Senate Republicans may partner with Democrats on “more flexible immigration laws,” which a few swamp Republicans have already hinted at. But this is far from the foregone conclusion she depicts. Conservatives have killed amnesty deals before (with a divided Congress under Barack Obama, and even a fully-Democrat Congress under George W. Bush), and there’s no reason to preemptively assume we couldn’t again. As famously articulated in the Flight 93 Election argument for Trump, a chance that might still fail is obviously better than preemptively accepting guaranteed failure.

More important, the sins of various GOP senators are largely irrelevant to the task of blocking what needs to be blocked right now, for one simple reason: because keeping the majority means keeping control of committees and the Senate calendar, through which the most dangerous bills can be stopped from even getting a vote in the first place.

Look, longtime readers know I’m no fan of McConnell. I’m not saying he’d have the stomach to, for instance, leave vacancies empty for four full years. But even I think he can at least do this. Most of his leadership failures have been rooted in his opposition to anything that violates his personal sense of governmental “norms,” particularly anything that ruffled his notions of how the Senate operates. While that disposition was a hindrance to making the most out of Trump’s presidency, it’s also obviously a natural enemy to the likes of court-packing or adding two new states.

Related to this distrust is a desire to punish, or at least not reward, the GOP establishment for its failures and betrayals, because they don’t deserve our loyalty. This impulse, prevalent on social media, is eminently understandable, but woefully shortsighted.

For one thing, it wouldn’t actually punish those who’ve betrayed us. Swamp Republican senators like Mitt Romney would be just as happy in the minority. The only people who would suffer would be the millions of Americans affected by the laws coming out of a united Democrat Congress and White House.

Besides, NeverTrumpers are the ones who spent the past five years arguing that we should let the most harmful candidate take power over our fellow Americans because the alternative didn't “deserve” office, not us (speaking personally, if I voted on the basis of who “deserves” what, I'd never vote at all). No, the Republicans establishment doesn’t deserve to be rewarded. But our families also don't deserve to suffer under generations of national leftist dominance – and protecting our families should trump punishing our enemies every time.

Lastly, there’s one more faction that doesn’t oppose the Georgia GOP duo and isn’t out for payback at all; they just don’t see the point of putting much effort toward an election they think will just be stolen anyway.

Obviously, this is a very real danger, and the Right needs to do all it can to pressure Georgia to adopt stronger protections for January: real signature verification, complete access for poll watchers and counting observers, the works. But that’s only half the solution. The other half – the half most within the grassroots’ power to influence – is to drive turnout outside the margin of fraud. Every conservative who fails to vote is one vote fewer the Left has to steal.

As disastrous as a Biden presidency would be, conservatives are well positioned to build off Trump’s gains and come back stronger than ever with a new standard-bearer in 2024 (like, say, Florida Gov. Ron DeSantis) … but only if they hold the line in Georgia next month and deny the Left the power to enact their endgame. The stakes have never been higher, and the margin for error has never been narrower.