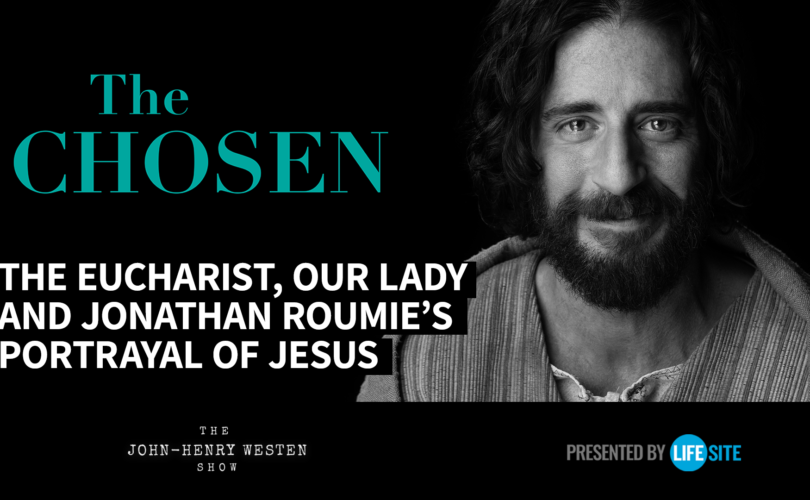 May 1, 2020 (LifeSiteNews) — There’s a new TV series about the life of Christ that’s gone viral in recent weeks. Most film depictions about Jesus are cheesy and not always well produced. But “The Chosen” is truly a work of the Holy Spirit. I was so blown away by it when I first saw it that I binge watched it for two whole nights! I had the chance to sit down with the show’s Jesus actor, Jonathan Roumie, a devout Catholic, on my podcast today.

“The Chosen” was first launched in 2017 but thanks to a massive, multi-million dollar crowdfunding campaign the show has expanded into 8 episodes. You can watch it on YouTube or visit the show’s official website by clicking here.

I wanted to ask Jonathan so many questions about his experience on set but first I wanted to know how he prepared for the role spiritually.

“It's been the preeminent experience of my life to honor and play Our Lord and Savior,” Jonathon told me. “I'm a practicing Catholic…Christ has always been in my life [but] in the last several years, that relationship has really, really gotten stronger.”

Jonathan mentions that one element of inspiration for “The Chosen” was a flashback scene in Mel Gibson’s The Passion where Christ was playfully splashing water on the Blessed Mother.

“It's one of the very few light moments that you see in that entire film, and also one of the first times we've ever seen Christ's humanity.”

Jonathan says that growing up he used to watch Franco Zeffirelli’s Jesus of Nazareth miniseries every Easter. After watching it, he would actually go and make out of wood a cross and pretend that he was being crucified on it.

He also participated in the living Stations of the Cross at his church and eventually was cast as Jesus in a depiction of the life of St. Faustina.

He told me that all three of those moments in a special way prepared him for his role in “The Chosen.”

Jonathan said that while filming was taking place he would go to mass and receive the Eucharist as often as he could. Holy Communion “gives me a sense of clarity and focus,” he said. “The overwhelming sense onset is one of spiritual presence.”

As far as being an actor who portrays the Son of God goes, Jonathan, who hosts a holy hour on his Instagram page, says that he is overjoyed to be using his gifts for a higher purpose.

“Because of the amount of times I've played Christ in a variety of projects in the last six, seven years, it's became clear to me that God is using me in this very specific and very literal way to bring people closer to His son.”

“I always felt that He had given me artistic gifts for a reason — to use them to glorify Him. And with this particular role He couldn't get clearer than that, as far as wanting to me to use my gifts to glorify him.”

“God wants His story to be told and he wants it to be told now. And He's given us the opportunity to tell it and do it well.”

Jonathan informed me that he consecrated himself to the Immaculate Heart of Mary two years ago and that his message to Catholics in these times is to remain humble and to pray the Chaplet of Divine Mercy.