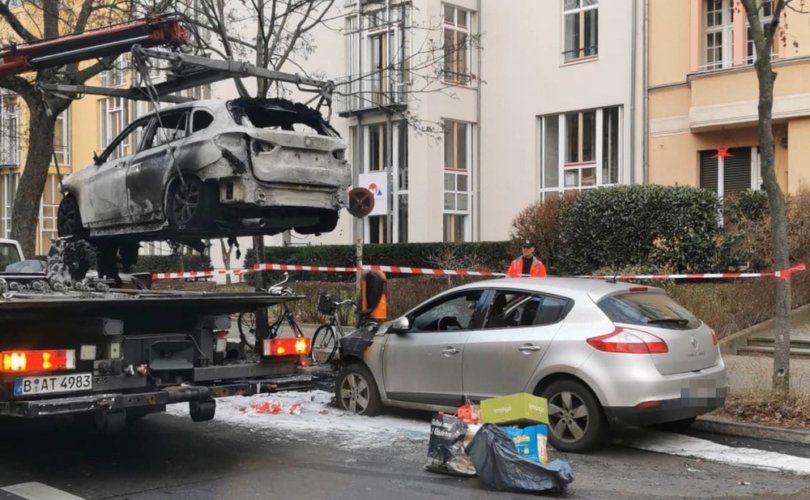 January 6, 2020 (LifeSiteNews) – Some of you may remember that back in 2015, the renowned German playwright Falk Richter premiered a play titled FEAR in Berlin. The play featured five pro-family women, including my friend Gabriele Kuby, who reject gender ideology, portraying them as Nazi zombies. During the course of the play, the zombies were attacked by actors who poked out their eyes, with one suggesting that they get “shot in the brain, as only then will they be really dead.”

Richter’s play turned out, one hopes unintentionally, to be prophetic: Two of the women were later targeted by arson attacks and one of them, Hedwig von Beverfoerde, had her van firebombed. The flames spread from the burning van to her family business, leveling it. In Germany, the attitude towards pro-life and pro-family figures in the public square has become overtly hostile over the past few years. Most choose to keep their addresses secret as a result.

So it is sadly not surprising that on New Year’s Eve, the car of a Protestant pro-life journalist Gunnar Schupelius was set ablaze in Berlin by far-left extremists. Schupelius, who runs his own blog and writes for the newspaper B.Z., had been previously condemned for calling on his fellow Germans to join the March for Life, which took place last fall. This invitation enraged feminists, triggering the arson attack that resulted in Schupelius’ car being almost completely burned.

“Every year he heavily promotes the ‘March for Life’ of male and female opponents of abortion and repeatedly makes it clear what he thinks of women and their tasks and duties,” stated the feminist group claiming responsibility for the attack. “We torched his SUV today,” the group added, and provided explicit details about where the journalist lives while stating that he “lives there with his children.”

The group claiming responsibility for the attack, Feministische Autonome Zelle, had previously attacked an evangelical church in Tübingen on December 27, and is unapologetic about its use of violence. They admitted that Schupelius also does charity work, but scorned his social contribution as one that only assists “those who subject [themselves] to the concept of hetero-normative worldviews.” Helping the poor and underprivileged, it seems, should only be the purview of abortion enthusiasts.

This second attack has been widely denounced, with Protestant clergy and Catholic bishops releasing a statement of condemnation, noting that this attack was nothing less than an attempt to use violence to intimidate dissenting points of view. The president of German’s journalist union concurred, noting on Twitter that the feminists’ attack constituted a “disgusting attack on press freedom.”

The increased backlash to pro-life and pro-family activism may be partially due to the fact that the pro-life movement is growing across Europe—Berlin’s March for Life in September of last year, the event that so outraged the feminist arsonists, attracted 8,000 marchers, their biggest ever event. Austria’s March for Life the following month, which I had the privilege of attending and speaking at, doubled in size to nearly 5,000. The Dutch March for Life has exploded to up to 15,000 in recent years, and this fall 50,000 marched for life in Slovakia, 20,000 marched in Northern Ireland, and over 1,000 marched in Switzerland.

The outrage of groups such as Feministische Autonome Zelle is thus partially in response to the fact that, decades after the Sexual Revolution triggered massive social transformation across Europe, there are still those who refuse to accept their ideology of misery and blood. Their presence on the streets of major cities, as thousands march to express their dissent, is a rebuke to those who have set fire to Western civilization’s Christian heritage and traditions, and their defence of love, life, and beauty enrages those who have taken a darker, uglier path.

And so, in the face of this resistance, their fury takes a familiar form: Violence against those they find inconvenient, justified on the feeble premise that anything that contradicts their right to total autonomy, even verbally or in print, is a threat worthy of this response.