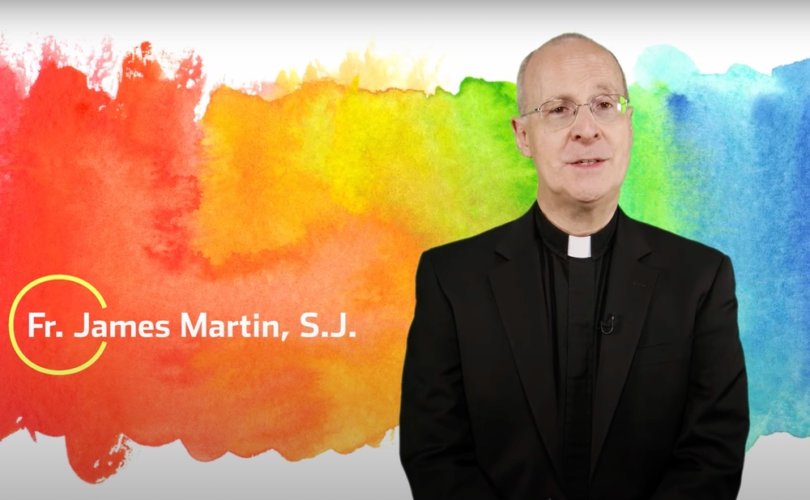 (LifeSiteNews) – It seems as if Father James Martin will be addressing another Canadian ‘Catholic’ school board this month, spreading his message of building bridges between heresy and Catholic doctrine.

This time, Slim Jim Martin will be speaking to the Bruce-Grey Catholic District School board in Ontario via Zoom. Last year, he spoke to the Waterloo District Catholic School Board in a similar fashion.

There are certain truths that have become almost immutable in Canada. For example, when Justin Trudeau speaks, you can be sure that he is either lying or reading from a script that he doesn’t know is a lie. In a similar fashion, you can be certain that Canadian Catholic school boards – at least in the province of Ontario – have all but made their apostacy from the Catholic Church and official policy statement.

Whether it is trustees telling cardinals who defend Church teaching where they can go, or numerous school boards waving the rainbow flag as a way of thumbing their nose at the Sacred Heart, Ontario Catholic school boards in particular are reprehensible for how they encourage heretical teachings to their staff and students.

— Article continues below Petition —
PETITION: We won't give any money to liberal bishops who attack the Faith
Show Petition Text
11696 have signed the petition.
Let's get to 12500!
Thank you for signing this petition!
Add your signature:
Show Petition Text

So it should come as no surprise that Father Jim will be pushing his pseudo-Catholic homosexualism to yet another school board. And you can bet your mortgage that the local bishop will do nothing to stop it. In fact, he will probably endorse the event.

I worked for a Catholic school board for years. In fact, I worked under the current director of the Bruce-Grey board, where Martin will be peddling heterodoxy in a few days.

I remember watching Bruce-Grey’s current director walk out of a professional development conference smiling and chumming it up with the other administrators after we were all forced to sit through a presentation that may as well have been a seminar on how to be a gay Buddhist.

I wish I was kidding. A woman in a same-sex “marriage” was flown in and paid a massive sum to teach a group of Catholic educators that – among other things – human beings are essentially just collections of energy, and we can manifest good vibes to emote stronger to our students.

It was like a parody of an old Oprah show.

I protested the heretical teachings present in the textbooks and curriculum recommendations for years, but it all fell on deaf ears. There were some sympathetic administrators during my time in Catholic education in the province, but they could not stand up to – or were they willing – the tide of apostacy that has gripped the system for years.

Sadly, I am at the point now where when I hear that a priest like Father Martin will be addressing a school board, it is like hearing that the sun rises in the morning – it is to be expected.

What is a parent to do in a situation like this? What do you do when your Catholic system has gone down the rabbit hole of heterodoxy so far that it is not even recognizable as Catholic?

Well, first, you would be wise to consider removing your kids from the school, although it is understandable that this is difficult in some cases.

That being said, the next thing people often do is attempt to fight for the system. Petitions, running for trustee positions and so on are all noble things to do, and I understand the sentiment.

But I can tell you as someone who fought the good fight from the inside – the people who work in the system largely don’t believe in Catholicism, and the administrators don’t care about Church teaching.

Of course, I speak generally, but my experience showed me that fighting for the Catholic board to be, well, Catholic, is not going to do much.

The bishops and the priests almost unanimously gave up on ensuring orthodoxy is the norm in the system decades ago.

If the powers that be in the Church won’t do anything about it, then leftist teachers unions and career bureaucrats are not going to risk ticking off the cancel culture by affirming that a man is a man and that marriage is marriage.

People need to understand, if you are a Catholic school board administrator, you will have necessarily compromised on your faith and morals dozens of times before you are at the point wherein you can be in charge of a board.

You either never believed the dogmas of the faith or you sacrificed your belief in them for a higher salary or bigger pension.

This does not mean that there is not a path forward. There is. But it will likely not involve having legions of leftist school board bureaucrats and teachers suddenly make the Catechism their favourite book.

The path forward for Catholics in Canada requires that Catholics build their own independent infrastructure.

This means homeschooling, either in groups or independently. Perhaps it means building private academies, even if the bishops tell you not to. (Bishops don’t have the authority to tell you to NOT educate your children properly)

It also means accepting the fact that the normal channels of Catholicity are almost irredeemable, unless there is some divine intervention, that we should of course pray for.

But in the meantime, don’t think you can throw your kids in the system and that a petition or a protest will change the mind of heretics who think it is a good idea that James Martin will teach your children’s’ teachers how to teach your kids the faith.