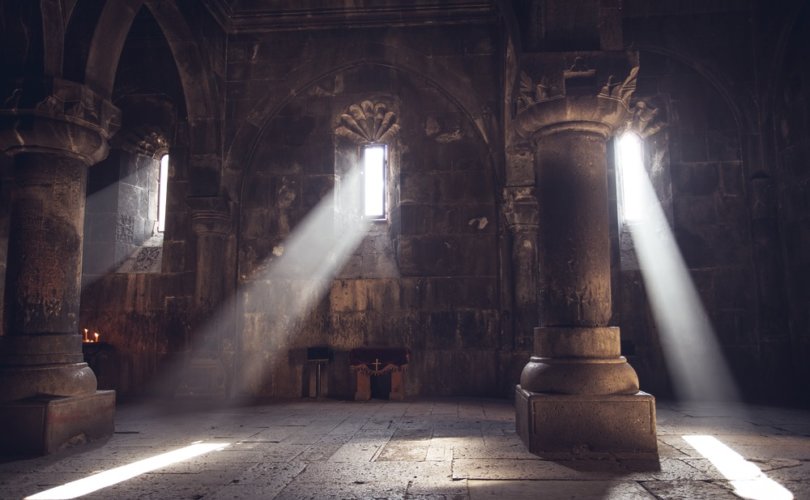 September 10, 2020 (LifeSiteNews) — In 1993, a Benedictine monastery, Fort Augustus Abbey in Scotland closed the school that had been its major work since its foundation in 1880, though latterly plagued by allegations of child abuse. In 1998, citing the high cost of maintaining the monastic buildings, the community itself was dissolved, its members dispersing to other monastic communities.

A similar process is now taking place with another Benedictine community, Downside Abbey in England. In 2019, the community was legally separated from the school which had existed alongside the monastic community since 1617, at that time an English Catholic institution in exile on the Continent. School and monastery have shared the current site in southwest England since 1814. But now it has been announced that the monks will be leaving: exactly when and to where has yet to be determined. The monastic buildings were designed for fifty monks, and the community is down to eight, with little prospect of new members. It is expensive to maintain, and co-existing on the same site as a school they no longer run is awkward. It is time, apparently, to move on.

The problems these institutions have had with vocations and with their schools are distinct, though entangled. Britain’s fee-paying boarding schools have had a difficult time in recent years, but many continue to flourish. It seems that they will do so without such a strong contingent of Catholic monastic schools among them as in the past. The more fundamental problem for these and many other communities has been the lack of vocations.

This is hardly a secret, and in 2015, the English Benedictines held a crisis meeting to consider the situation, which was reported by one participant, Fr .Hugh Somerville-Knapman of Douai Abbey. He notes:

There was much discussion about the fact that young recruits now usually bring with them an implicit challenge to the status quo in many houses. We all agreed that their zeal and idealism must not be crushed but nurtured, matured and even encouraged.

Something else the meeting apparently agreed about was the liturgy:

There were repeated calls for greater dignity to our worship … and the need to de-stigmatize the Extraordinary Form.

The two things are linked. The young men who have been presenting themselves at Benedictine houses over the last twenty or thirty years have very often been more liturgically and theologically conservative than the senior members of the communities themselves. Put simply, these young men have not always been made very welcome. The same phenomenon has been recorded in diocesan seminaries, but in recent years, bishops and seminary rectors have begun to be appointed from a generation ordained well after Vatican II, who are a bit more open-minded. In religious communities, the old-timers don’t disappear from the scene in the same way, and one can continue to be dominated by the generation personally responsible for ripping out the old High Altar and tossing the old books onto the bonfire, even as they reach their seventies, eighties, or nineties. These men are not friendly to the idea that they may have made a mistake.

If there has been progress on the issues identified by Fr. Somerville-Knapman since 2015, it has been well hidden.

As Fr. Christopher Basden pointed out in a recent open letter, not all religious communities have declined in the way that Downside’s has, and some have reversed such declines. The examples Fr. Basden gives provide several models that could be followed — models with proven track records of success. These range from the complete restoration of pre–Vatican II liturgy and practices, as practiced in the monastery of Norcia in Italy, to the use of a form of the Office reformed after the Second Vatican Council, as practiced by the Carthusians of Parkminster in England, though celebrated in Latin, and various options in between, as practiced by some of the French Benedictine communities. Fr. Basden writes, of Parkminster:

In 1990 my dear late friend, Dom Bernard O’Donavon, then Prior, felt they simply could not go on. They were down to eleven old men.  The buildings were crumbling all around them. Continual Postulants and Novices simply came and went with none persevering for almost twenty years. The wisdom was that they were finished and that they would have to move. Thankfully, a higher wisdom intervened, Dom Cyril Pierce took over and as a remarkably successful Master of Novices at The Grand Chartreuse (twelve men to solemn profession) also oversaw a confident formation of new men. In addition to this he oversaw lottery funding to repair the sorry state of the monastery.  Thirty years later they have twenty-seven monks. It takes but one man with the vision and determination and grace to succeed.

What Fr. Basden’s examples have in common is not a single, precise liturgical and community vision, but a life that is understood from within and from without as serious and tough, but sustained up by its celebration of the Office, which for religious claiming allegiance to St. Benedict has got to be the ultimate priority. As St. Benedict wrote, “nihil operi Dei præponatur”: “nothing is to be given priority over the Work of God” — that is, to the recitation of the Psalms, Antiphons, and Readings of the Office.

Readers should pay attention not to me, if I suggest that the spiritual vitality of a Benedictine community can be provided only by singing the Office in Latin with its ancient antiphons and using the ancient melodies. No: you should listen instead to Pope Paul VI on the subject, writing in 1966.

In present conditions, what words or melodies could replace the forms of Catholic devotion which you have used until now? You should reflect and carefully consider whether things would not be worse, should this fine inheritance be discarded. It is to be feared that the choral office would turn into a mere bland recitation, suffering from poverty and begetting weariness, as you yourselves would perhaps be the first to experience. One can also wonder whether men would come in such numbers to your churches in quest of the sacred prayer, if its ancient and native tongue, joined to a chant full of grave beauty, resounded no more within your walls. We therefore ask all those to whom it pertains, to ponder what they wish to give up, and not to let that spring run dry from which, until the present, they have themselves drunk deep.

Pope Paul knew that religious communities all over the world were preparing to ditch the sung Latin Office, and with prophetic insight he knew what the consequence would be. As Shakespeare expressed it, lamenting a previous dissolution of the monasteries: “Bare, ruined choirs, where late the sweet bird sang.”