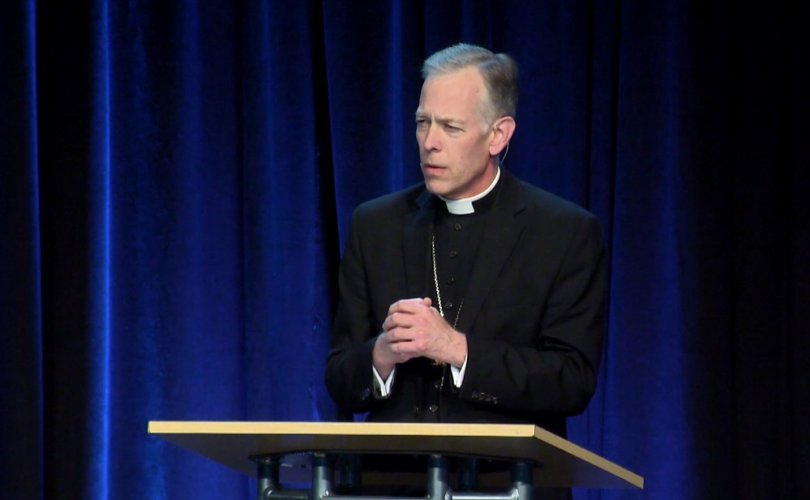 In his verbal comments in response to the SCOTUS leak, President Biden makes reference to a person’s choice to “abort a child”. He said it. It’s a child. So, Mr. President, please remind us again how your support for abortion is consistent with your Catholic Faith?

It is a markedly appropriate question for the Archbishop to ask Biden, considering he has flaunted his reprobate version of Catholicism throughout his political career, all while supporting and advocating for activities that transgress natural law and definitive teachings of the Church.

Responding to the news of the SCOTUS leak regarding the impending overturning of Roe v. Wade, Biden uttered the typical post-modern gobbledygook that is to be expected out of a man who is likely senile.

He said to reporters, “Look, think what Roe says. Roe says what all basic mainstream religions have included, that …  the existence of a human life and being is a question. Is it at the moment of conception? Is it six months? Is it six weeks? Is it quickening like Aquinas argued? So the idea that we’re going to make a judgment that is going to say that no one can make the judgment to choose to abort a child based on a decision by the Supreme Court, I think goes way overboard.”

Wow, there is a lot to unpack there. It is ironic that the Commander in Chief does not have command of basic logical reasoning skills.

Biden stated that “all basic mainstream religions” have questioned the existence of a human life. I will give the benefit of the doubt to Biden the Apostate and assume that he does not mean that religions have questioned whether human life exists, but rather when it begins.

Biden is a leftist politician, which is to say he is a manipulator and a shrewd liar. There has been debate on when the fullness of a human being comes into existence through the world’s religious and philosophical tradition, however, this does not mean that abortion has been permitted by religions.

The debate about the composite nature of body and soul is an age-old question that was considered in Antiquity across the philosophical spectrum.

When Biden mentioned “quickening like Aquinas argued,” he must have been referring to the notion of ensoulment that was considered by St. Thomas Aquinas.

Aquinas did say that an unborn baby receives a soul 40 or 80 days after conception, depending on gender – this was the Aristotelian view. However, this does not mean that Aquinas approved of abortion. In fact, he argued that abortion was against the natural law, as it stopped the natural process of the creation of human life, and therefore was a mortal sin.

Furthermore, if Biden is referring to “mainstream religions,” he must be including Judaism, which accepts the Old Testament as divinely inspired. In Psalm 50 (51) verse 7, we find King David saying, “For behold I was conceived in iniquities; and in sins did my mother conceive me.”

Sin is a spiritual quality, this if King David was conceived in sin, then he must have had a spiritual reality to his conception – a soul.

The left loves to tell us that the “science is settled” when it comes to global warming/cooling/climate change, but of course the science is “evolving” when it comes to gender, and vaccines, and diseases. Well, thankfully, the Church does not operate on a contradictory and ever-undulating scale of changing information and has settled the debate regarding abortion.

Biden likely mentioned Aquinas’ arguments regarding ensoulment to suggest that a Catholic could disagree on the topic.

Aquinas – although the Angelic Doctor – is not the only authority in the Church, and the Church has always been taught by the Church that abortion is a grave evil, regardless of debate within the bounds of natural philosophy about when a human receives a soul.

In addition, the definitive teaching of the Church on abortion in the realm of civil society is clear: “The inalienable rights of the person must be recognized and respected by civil society and the political authority. These human rights depend neither on single individuals nor on parents; nor do they represent a concession made by society and the state; they belong to human nature and are inherent in the person by virtue of the creative act from which the person took his origin. Among such fundamental rights one should mention in this regard every human being’s right to life and physical integrity from the moment of conception until death.”

Archbishop Sample was right to call out Biden’s Catholic fakery, as he has on this occasion – as well as in the past – presented false doctrine with the influence of the highest civil office in the land.

And Catholics are right to stand firm in their position that Biden should not approach the altar for reception of Holy Communion due to his grave public offenses against the Church.

Perhaps the most striking remark the dimwitted President made was when he remarked “that no one can make the judgment to choose to abort a child.”

Often, pro-aborts will do everything they can to deny the reality of the child in the womb, as it is clearly easier to argue for the immorality of the abortion of a child than for the termination of “clump of cells” or “foetus.” Of course, a foetus is a child, but the term sounds more medical and sanitary than “child.”

At any rate, Biden plainly said that aborting a child is a choice!

A child is something to have and to hold, to sing to sleep and to care for when sick. A child is a person who you love, and who loves you. A child is not something you abort.

Joe Biden is OK with killing children. Lord have mercy on his soul.