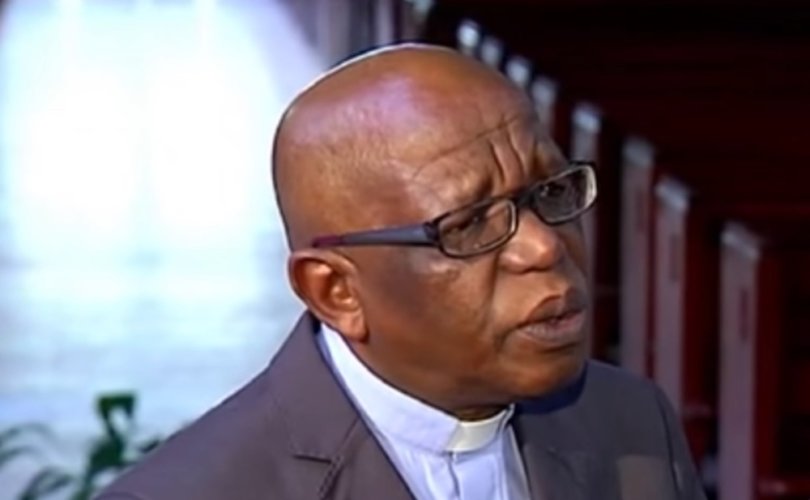 As the South African daily news website Times Select reported yesterday, Archbishop Tlhagale says that under the current Code of Canon Law, a priest who assists with an abortion or gets married is automatically punished by the Church with excommunication, but a priest who commits sexual abuse is not.

In his eyes, this needs to be corrected and changed. The African archbishop said these words at the October 27 ordination of four men to the priesthood in Johannesburg. According to the news report, the archbishop said, “considering the moral gravity of abuse of minors by priests, the Church ought to consider expanding the list of acts that prompt automatic excommunication.”

According to Archbishop Tlhagale, the “strict and merciless criticism” that the Church currently receives is due to the lack of responsiveness on the side of the clergy: “The halo of the Catholic priesthood has been broken. The church is castigated because it appears to have claimed to have a ‘holier-than-thou’ attitude. We priests claim to be the other Christ. We have set the bar high, but fail lamentably to live up to that moral standard, that moral ideal, hence the merciless and the harsh criticism.”

“There is palpable outrage against the Catholic Church hierarchy for its complicity, its silence, and its cover-ups – for siding [with] and hiding perpetrators at the expense of victims,” he added.

The prelate also referred in his homily to concrete abuse cases that took place in South Africa.

“Child abuse should simply not happen,” Tlhagale commented. Mentioning the case of the abusive Pastor Timothy Omotoso in Port Elizabeth, he said: “This case brings to the fore the raw feelings of anger, of outrage, of bitterness, of frustration, of hatred, even of self-hatred; feelings, desires of retaliation, of betrayal, of disloyalty, of unfaithfulness, of cover-ups, of a sinister abuse of power and of deception.”

As the German Catholic newspaper Die Tagespost reports, the Southern African Catholic Bishops' Conference announced at the beginning of October that in the future, it will take more measures against sexual abuse committed by Church personnel. They established the rule, for example, that candidates for the priesthood first have to provide a clean certificate of conduct and undergo a psychological assessment. The South African bishops also say they will work with the police in cases of sexual, physical, or even some emotional abuse committed by Church employees.

Archbishop Tlhagale is not the only Catholic who has called for the excommunication of abusive priests. Professor Peter Landau, an internationally renowned canon law expert, recently proposed in an October 1 commentary for the German newspaper Süddeutsche Zeitung that the automatic excommunication should be introduced for abuser priests. He points out that the 1917 Code of Canon Law contained a passage calling for strong penalties for such priests, to include their laicization. This strong language was removed from the 1983 Code of Canon Law. In Landau's eyes, the Catholic Church could regain “trustworthiness” by re-introducing firm penalties, to include automatic excommunication into canon law.

The lay Catholic theologian and author Scott Hahn just told the audience at the Napa Institute’s Authentic Catholic Reform Conference in Washington, D.C., that “excommunication,” rather than defrocking, should be the penalty for clergy convicted of sex abuse.

He added that excommunication is a “hard medicine” that ultimately seeks the good of the one being punished. Those calls for the predatory ex-cardinal Theodore McCarrick to be merely “reduced to the lay state,” however, indicate for Hahn a contempt for the laity.