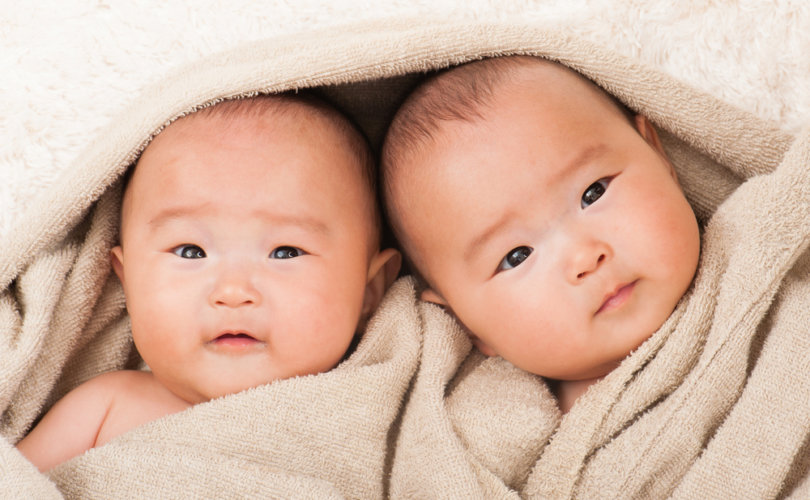 January 22, 2020 (LifeSiteNews) – China’s National Bureau of Statistics just announced that 14.65 million babies were born in China last year. It also claimed that China’s population continued to grow, reaching 1.4 billion by the end of 2019, up from 1.39 billion the year before.

Both claims are probably false.  The real number of births is lower, probably much lower.  As for the population of the most populous country on earth, it has not only stopped growing, but may actually be shrinking.

So why is the Communist Party insisting on inflating the numbers?

Because to do otherwise would be to admit that one of its signature economic policies of the past forty years—the one-child policy–may have fatally compromised China’s future.  For decades the Party justified its brutal birth limitation policies, which involved arresting, imprisoning, and forcibly aborting tens of millions of women, as a necessary precondition of economic growth. “The strict regulation of births is the only way out of poverty,” or so the Party line went.

But while the Party was celebrating the elimination of 400 million human beings, a demographic winter slowly descended upon the country it was misgoverning. China’s population is now aging more rapidly than any population in human history, its birth rate is in free fall, and its future economic growth imperiled.

The artificial inflation of birth and population numbers is nothing more than an effort by Party hacks to hide these failures and escape responsibility.

Of course, even if the official claim of 14.65 million births in 2019 were true, this would still be the lowest number of births since 1961, a time when China was in the grip of the worst famine in human history.  The People’s Communes had collapsed, crops had failed, and hundreds of millions of Chinese were starving.  From 1960-62—a period the Party now refers to as “the three difficult years”–an estimated 42.5 million people starved to death. Difficult, indeed.

China recorded only 13.81 million births in 1960, the first of the famine years, a number which fell to 11.87 million births the following year.  It was all the starving women of the “three difficult years” could do to stay alive, much less have babies.

Sixty years down the road, the granddaughters of those starving women are turning out to be an equally barren lot, but for very different reasons.

If you want to know how few babies are actually being born in China, you have to search out provincial and municipal data. These numbers suggest that the actual number of newborns in China is somewhere between 10 and 20 percent smaller than the government claims.

The National Health Commission’s annual yearbook for 2018 is especially revealing in this regard, because it breaks down the national total province by province.  It’s easy to see that the two sets of numbers contradict one another.  The yearbook publishes a figure of 15.21 million as the total number of live births in China in 2018.  But if you total up the provincial numbers you arrive at a figure of only 13.62 million, or some 1.61 million births fewer. This is hardly a rounding error.

Another example comes from the city of Chongqing, which reported that from January through November of last year some 255,692 babies were born. But the month-to-month data published by the city includes the astounding claim that 66,861 newborns arrived in the month of June alone. This number is nearly five times larger than the numbers given for any other month. This anomaly again suggests that someone bumped up the reported number for June by 50,000, so that the annual figure would match a national target.

But the most revealing of red flags comes from China’s Total Fertility Rate, or TFR, which is the expected number of children that a woman will have over her reproductive lifetime.  A country’s TFR is key to predicting its long-term demographic health.  A TFR of 2.1 means that women are averaging slightly over two children each and suggests that the population will be stable over time.  A TFR of 1, on the other hand, means that women are averaging only one child over her lifetime. It is a recipe for demographic suicide.

The TFR of Chinese women has been falling for decades.  In the 2000 national census it came in at only 1.22, dropping even further in the 2010 national census to only 1.18.  But then came the real shocker.  In 2015 the National Bureau of Statistics reported that the country’s TFR had fallen to only 1.05.  This is the second lowest fertility rate in the world (only tiny Singapore is lower), and it clearly portends a Chinese population crash.

These were inconvenient numbers indeed, so for the past twenty years Chinese officials have done their best to cover them up.

Instead they have claimed—without any real evidence—that the nation’s TFR has stabilized between 1.6 and 1.8.  The chief organization promoting this higher number was the Family Planning Commission, which is to say the same organization that for almost four decades ruthlessly enforced the country’s one-child policy.  Is anyone surprised that the same Party functionaries responsible for carrying out this barbaric policy are now trying to downplay its negative consequences?

As for the National Bureau of Statistics, it stopped publishing data on China’s TFR in 2017.  To date, it has offered no explanation as to why it has gone silent.

Almost all of the projections of China’s future population growth, whether these come from the Chinese government or from international organizations like the UN Population Fund, are based on the assumption that China’s TFR is right around 1.7.  But what if China’s actual TFR over the past 20 years is closer to 1.1, and China has been padding the number of births by several million a year, both of which the data seem to indicate.

In that case China’s actual population would be tens of millions smaller, and many years older, than the numbers claimed by Beijing.  Not only that, but the projections of China’s future population by the UN Population Fund would be off by an even greater amount.

In fact, one of the most credible scholars on this question, Dr. Fuxian Li of the University of Wisconsin, believes that China’s published population statistics have been so corrupted by politics that they are off by an incredible 100 million people. This would mean that the country’s actual population may only be 1.3 billion, rather than the 1.4 billion that Beijing claims.

China’s population has probably already started to decline, says Dr. Yi.  And he projects that, if the current low birth rate persists, China’s population may fall to only 400 million by the end of the century.

Some critics are even beginning to speak out inside of China itself.  They now say that the 2016 decision to move to a two-child policy was too little, too late.  They note that, even if all birth restrictions were lifted tomorrow, the birth rate would not significantly rebound. Demography is still destiny, even if you own the most populous country on the planet.

It is not clear what the Party intends to do, if anything, in the face of this looming calamity.  It cannot manufacture babies out of thin air, the way it manufactures statistics.  And it is even more loath to admit that it has—quite literally—aborted China’s future.

A normal government would not fabricate birth statistics, or lie about the number of people who live within its borders. But then a normal government would not have inflicted an extremely toxic form of population control on its people in the first place.  A normal country would have questioned the wanton destruction of valuable human capital this way. Most of all, a normal country would have rejected the claim that the road to national greatness required the sacrifice of hundreds of millions of the youngest and most vulnerable members of society. Not the Chinese Communist Party, however, which in each and every one of its many political campaigns seems to perversely delight in such destruction.

I suppose it is no surprise that the Party feels compelled to birth imaginary babies, after killing so many flesh and blood ones. After all, the one-child policy was one of its signature policies, a key element of the Party’s plan to overtake the U.S. and become the most powerful player on the planet.

It is past ironic that the policy once touted as the engine of China’s success—the one-child policy—may ultimately turn out to have dug its grave.

A dying China will never be number one.

Steven W. Mosher is the President of the Population Research Institute, and the author of Bully of Asia: Why China’s Dream is the New Threat to World Order