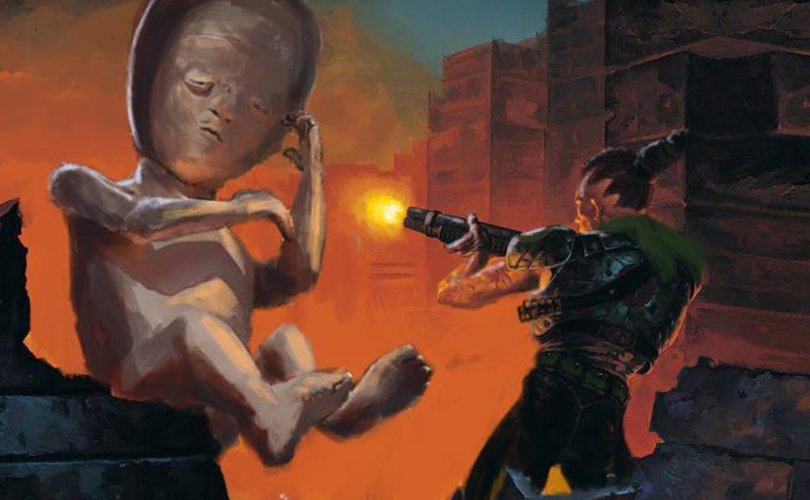 ARGENTINA, July 20, 2018 (LifeSiteNews) — From the lying to the callousness, there’s a lot to dislike about pro-abortion advocacy. But speaking personally, one quality I absolutely adore about the culture of death’s apologists is their tendency to occasionally forget that other people can see them and lapse into accidental honesty about what they’re defending.

As LifeSiteNews has covered, debate is currently underway in Argentina over whether to legalize abortion-on-demand. The effort passed one chamber of the legislature last month but its prospects in the other are thought to be less likely. Regardless, the country’s cowardly “pro-life” president Mauricio Macri says he’ll bow to whatever the legislature decides, and international abortion forces are pressuring the country to legalize.

Amid this backdrop, it seems one of the features of the country’s pro-life demonstrations has been a giant cardboard model of a human fetus:

Because of such visual aids’ obvious relevance to the abortion debate, abortion fans have traditionally been especially hostile to any hint of what exactly their favored procedure destroys. And one Argentinian activist had a particularly memorable response to our cardboard friend.

On Thursday, the video game website Kotaku (a former affiliate of the defunct, far-left Gawker) highlighted the work of Florencia Rumpel, a game developer who created an unofficial mod (downloadable alteration) to the classic computer game Doom, in which the final monster the player must destroy is replaced with the fetus model.

Yes, you read that right: this person thought a video game about shooting a giant baby to death was not only a good idea, but that it would somehow demonstrate why people should be more accepting of abortion.

As if that wasn’t enough, the lead-up to the final battle has the player punching to death smaller enemies in the form of “anti-abortion women,” priests wielding crowbars, and Nazi soldiers (because “don’t kill kids” is such a Hitleresque message). Once the giant baby has been aborted, a medical kit appears in its place, and the message “You defeated fetito! Give this misoprostol to those in need so they might defeat it too!” appears on the screen.

You can watch a clip of Rumpel’s creation, Doom Fetito (“Little Fetus Doom”) for yourself right here [WARNING: the pixelated blood and gore is far from realistic, especially by today’s standards, but the imagery is certainly offensive].

“I found a tweet comparing the cardboard fetus with a Half-Life boss, and I thought it could also be a good fit for Doom,” she explained to Kotaku. “What these anti-rights people were doing was plain ridiculous, and someone had to point that out.”

Okay, so maybe “explained” wasn’t quite the right word, because none of that even comes close to making sense out of the thought process here. On the mod’s home page, the sum total of her rationale was “this thing” (the original cardboard model) was “weird.”

There’s something astonishing about a mindset that puts so much effort into a gesture that draws attention to the very truths 99% of one’s fellow activists work every day to ignore, deny, downplay, and obscure. Heck, if you showed the clip to anyone completely devoid of context, I’d bet that most of them–on either side–would assume it was a (tasteless) expression of an anti-abortion message.

This was not lost on various Kotaku commenters, including some pro-aborts with just enough self-awareness to see a messaging problem:

Very much pro-choice myself but I feel like creating a violent shooting video game where the goal is to abort a giant fetus with a shotgun might be sending the wrong message.

Yea. There’s a reason pro choice groups don’t like it when fetuses are humanized.

So…you go through a level shotgunning anyone who opposes the pro-choice viewpoint before blowing the head off a fetus?

What an utterly moronic (not to mention disgusting) way to try to make a point.

So, you abort it with a shotgun? Classy!

Maybe pro-abortion fanatics do things like this because their cognitive dissonance is so extreme that they literally can’t connect the sight of a baby to the correct human intuitions anymore. Maybe it’s because they aren’t trying to persuade anyone and are just out to amuse their fellow travelers with shock value. Either way, any time the culture of death lets the mask slip is a great day for life.