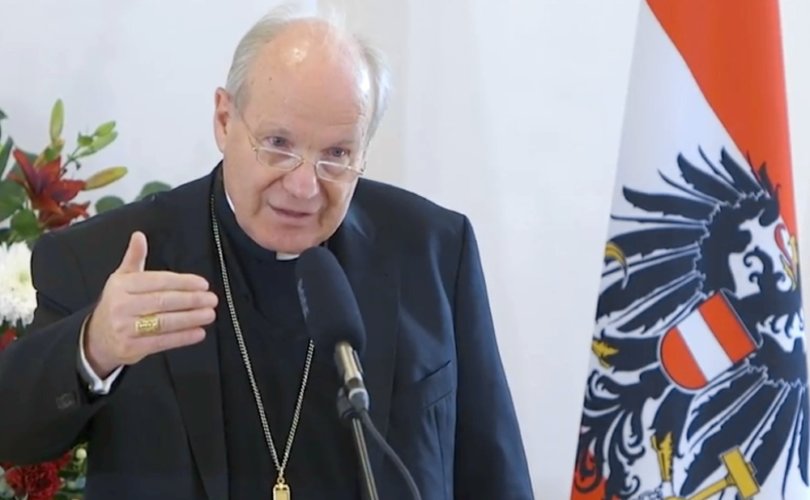 January 10, 2019 (LifeSiteNews) – A recently concluded art exhibition in the rectory of St. Stephen's Cathedral in Vienna, Austria included an image [WARNING: Following links lead to graphic images] of two lesbians kissing in front of a church as well as an image of an almost completely nude woman posing as the Resurrected Christ.

The Austrian news website Kath.net reported today that these pictures were to be found and seen in the Curhaus, the building adjacent to St. Stephen's Cathedral which is among other things the rectory and which is open for everyone, including children. The exhibition ran from September 2018 until January.

The artist, August Zoebl, states in the exhibition that “what is needed is the explosiveness of the pictures” in order to “communicate the outrageous message of the Resurrection.” These words are to be found next to the image of a naked woman, with light coming down from above, in a dark room, who partly covers her body with a white linen similar to the one that was found in the tomb of Christ. The photographer calls his picture “Pietà.” It also said as a sort of title: “The first light in the sepulcher: a man.” That picture was for sale for a price of 25,000 euro.

Another picture shows a woman standing on the top balcony of St. Stephen's Cathedral, holding a golden chalice in her hand.

Kath.net reached out to Cardinal Christoph Schönborn, the archbishop of Vienna, but did not receive any comment from the prelate.

At the end of 2018, Cardinal Schönborn had caused a stir when allowing a charity rock concert and dramatized play to take place in St. Stephen's Cathedral. During this event, the main actor – who in the past has repeatedly played nude roles on stage and who played homosexual scenes with other men in movies – stood upon the Communion rail of the church with a naked upper body, singing. The play also included several demons and one female Satan. The event was hosted by Gary Keszler, a prominent homosexual activist.

Also last year in October, Schönborn's diocese had a similar event in another church, the Franziskanerkirche, where there was a rock concert with an immodestly dressed woman standing in front of the altar, singing. There were flickering lights in the darkness, with loud music and white-hooded strange-looking monks. Father Karl Wallner, the prior of the Cistercian monastery Heiligenkreuz, near Vienna, hosted the event. Explaining his decision to organize this event which was meant to introduce people to the charity organization missio (the Papal Mission Society in Austria), Wallner said that Pope Francis always “tells us to try something new, and that is what we have done now.” He also later added that perhaps for some people this event might be “provocative.”