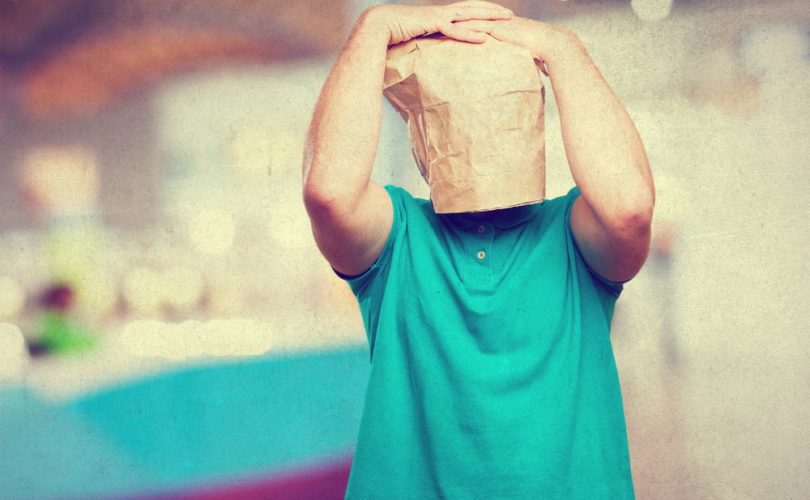 He must have felt some shame in what he did. And to be perfectly honest, that breaks my heart.Shutterstock

I'm sharing this story with you, fully aware of how ridiculous it now sounds.

When I worked for Planned Parenthood we had a specific protocol that we had to follow when picking up our abortion doctor. Looking back, I realize how crazy this was, but at the time, I felt like I was a part of some super secret high-level security task force.

Our abortion doctor worked full-time with a university. Per his contract with them, he was not allowed to have any other paid positions. If he did, he had to give a percentage of that money to the university. Our doctor certainly didn't want to do that, so he needed us to be very secretive with his identity. We couldn't give out his name to our patients…if they asked for his name, we would give a fake name. He would come into the procedure room with a full head covering on and a mask that shielded his entire face. He didn't want to take a chance that he could be recognized by one of the patients. He even would sometimes introduce himself with this fake name we had given him.

The primary problem was all of those pro-lifers outside. If they found out who he was, they could turn him in and get him fired for breach of contract. We were much more worried about the pro-lifers finding out his identity…after all, the patients were sedated and usually didn't remember much.

We had a piece of paper that detailed our pick-up points for the doctor. He was from a town about three hours away, so he would come in the night before, stay at a hotel under an anonymous name and then we would pick him up at one of our “safe” locations. Usually, we would pick him up from a different hotel parking lot. So, “Point H” was the Hilton parking lot. “Point M” was the Marriott. “Point D” was the Holiday Inn. “Point B” was a bank parking lot. Only two people in our clinic had the super secret “point locations” list…me and my boss.

The next morning would be “abortion day.” I would pick up breakfast for the staff, drop it off at the clinic, help get the rooms ready for the day, grab a bed sheet (I'll explain later) and head to our meeting point. I would drive around for several miles before I actually went to the pick up spot to make sure that I wasn't being followed. Once I confirmed that no one was tailing me, I would head to pick up the doctor. I would pull in the parking lot and find the doctor's car. He would walk up to my car and I would roll down the window and give him our secret word. He would then get in the backseat of my car, lay down and cover himself up with the sheet that I picked up earlier. We would then drive around for a little bit just to, once again, make sure no one was following me. Then I would make the call to my boss to let her know that they needed to prepare for our arrival.

We had a wooden privacy gate that opened to a small parking space at the side of our building. This was also where our back door was located. Two people would be assigned to go out and hold the wooden gate open so I could pull into the space without interruption. We would then sit in the car until the gate was closed and a sheet was held up between my car and the back door…that way, none of the pesky protestors could get a photo of his face. He would then quickly jump out of the backseat of my car, cover his head with the sheet that had previously covered his whole body and run in the back door. We would then repeat this charade at the end of the day when he needed to go back to his car.

Silly, right? It absolutely was. But it was worth it to him. He was bringing home $3k-$4k per “abortion day.” And we had to do whatever we could to “protect” our doctor. We needed him. Abortion doctors are hard to come by.

I can only conclude that is because he truly didn't want people to know that he was an abortion provider. He must have felt some shame in what he did. And to be perfectly honest, that breaks my heart. I often wonder about him and question why he continued to perform these procedures if he knew, somewhere down in his heart, he shouldn't have been doing them. I'm guessing it was the money. He had a daughter in college and he was paying for her education with the money he made at our clinic. But, I also think that somewhere in his soul he felt like he was helping these women. Maybe he had to tell himself that so that he could keep doing it over and over again. He was a father. He was a nice person. He was a brilliant urogynecologist. He delivered babies. He wasn't what you may imagine when you think of an abortionist. But yet, as smart as he was, as kind as he appeared, he bought into the lie.

I think we in the pro-life movement have done a fantastic job of humanizing the unborn. Of course the unborn are fully human. And because of that, they should be protected with equal human rights. We have said it over and over again. We have shown graphic images. We have helped women connect with their unborn babies via ultrasound. We have discussed the development of the unborn child. We know so much about them because of science and medical technology.

But somehow through this incredible humanization of the unborn, we have dehumanized those who work in the abortion industry. Why? Because we need someone to blame. Abortion is so heinous, so unthinkable to so many people. Someone has to be at fault. Certainly it isn't the mother. She has fallen victim to our culture of death. She believed society when they told her that the most compassionate thing she could do for her unwanted child was to take its life. Of course she believed it. That message is everywhere. And we know that we can't save the child unless we love the mother, so blaming her would only hasten the death of the baby.

So who's left? The abortion workers! They are to blame. But believe it or not, they have also fallen victim to our culture of death. They have been told that they are helping women. And we believed it because the women we “helped” would often come back to thank us…profusely. We were their heroes. We were their saviors. How could it be wrong if we had helped so many?

What we didn't see were those same women five years down the road…when they are holding their “wanted” child in their arms for the first time. Would they be thinking of the child they aborted? The hole in their heart that they can't seem to fill? We didn't see them twenty years down the road when they held their first grandchild…still aching for the child they lost in the name of “choice.” Pondering how many grandchildren they will miss because of that one procedure so many years ago. Or sixty years down the road…as their lives come to an end. Would they have lived their whole lives with that same hole, that same emptiness that they could never seem to fill?

We were all blinded. Not because we were bad people, but simply because we were mindless. Mindlessness. That is the rampant state of being inside the abortion industry. And when you become mindful, that is when you decide to leave.

Let's work together to erase mindlessness.