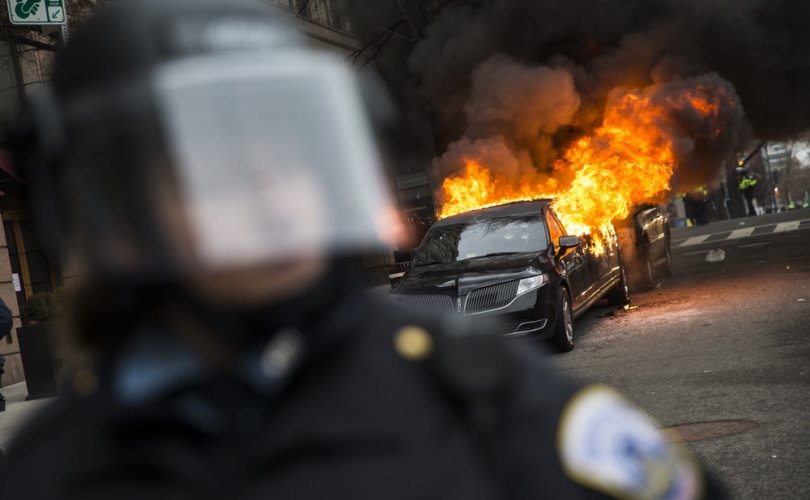 Anti-Trump protestors set a limousine on fire during clashes with police after President Trump was sworn into office in Washington, DC on January 20, 2017.Samuel Corum/Anadolu Agency/Getty Images

July 2, 2018 (LifeSiteNews) – Perhaps nothing has revealed the stark American divide like the question that sprang from the lips of commentators from the moment the retirement of Justice Anthony Kennedy was announced: Will there be violence? There is in this question a recognition that two great masses of American people have moved too far away from one another for compromise, and that Kennedy’s feeble attempts to hand the sexual revolutionaries everything they wanted while assuring conservatives that they could not be prosecuted for disagreeing with him has done nothing to create the civil and peaceful polity that he no doubt genuinely wanted.

Violence seems to be bubbling just below the surface. Press Secretary Sarah Huckabee Sanders may have been politely asked to leave a restaurant, but the Secretary of Homeland Security Kirstjen Nielsen was more or less mobbed out of one. Democratic Congresswoman Maxine Waters was enthused about these happenings, and urged a crowd of her supporters to replicate these events whenever Republicans appeared in public. These things happened before the Left realized that there is a very real possibility that they could lose their majority on the Supreme Court—something that they simply will not countenance.

I’m not the only one to wonder aloud if the ongoing American civil war that Dennis Prager frequently talks about may escalate from occasional street skirmishes to something more malevolent. David French noted that violence was likely in the National Review. So did Michael Dougherty, who noted that many people are simply losing faith in democracy itself, seeing it primarily as a tool that one segment of the American people uses against the other. Traditionalist writer Rod Dreher also warned that the resignation of Kennedy could serve as a “catalyst for violence.” If the Left decides that one Supreme Court seat could swing the balance of power away from them, they will not allow that to happen without a bloody fight.

The “thoughtful essay pieces” that stop just short of justifying this violence are beginning to appear in prestigious publications to lay the pseudo-intellectual groundwork. In a Maclean’s magazine essay titled “It’s too late for civility in American politics,” for example, Andray Domise insinuated that Christian conservatives have it coming because they are such an oppressive bunch, especially in their demands for religious liberty, which he clearly doesn’t think is a valid concept:

Earlier this month, the Supreme Court of the United States ruled that the Masterpiece Cake Shop in Colorado had been unfairly sanctioned for its refusal to make a cake for the wedding of a same-sex couple because the shop owner’s religious beliefs forbade him from using his talents toward creating products that he deemed objectionable. And just this week, the nation’s highest court struck down an opinion from the Washington state Supreme Court, which had previously ruled that a flower shop which refused to provide service for a same-sex couple had violated the state’s anti-discrimination law.

If those bigots won’t bake the cakes they are told to, and the little old lady who served a gay couple for years but said that her beliefs wouldn’t let her do wedding arrangements won’t knuckle under, fascism must be on the march—at least according to your friendly magazine columnists. After all, the little guy must obey the State (or something like that). Conservatives have no right to urge civil discourse, writes Domise, because they are the enemy:

Some American conservatives have long agitated to deny others their rights, from women seeking birth control, to same sex-couples seeking to get married, and to transgender women seeking the basic dignity of using the bathroom unaccosted.

You’ll notice, of course, that Domise simply ignores the competing premises of conservatives here as if they are driven exclusively by a desire to be mean-spirited. He insinuates that they are evil and have no reasons for what they believe. Those who do not want biological males in female bathrooms have the interests of women in mind—but to Domise, the scenario of a dude who is very obviously a dude complaining about discrimination and threatening to bring the full force of the law onto a restaurant that asked him for his ID to use the ladies’ restroom, which he refused to provide, because it would have confirmed he was a male—this is evidence not of respect for female privacy and a skeptical approach to the unproven ideology of sexual fluidity, but fascism. He says as much himself:

The call to civility, at this stage of the game, amounts to little more than the appeasement of fascists in the vain hope they will learn to treat others as human, even as they drag America backwards to the Reconstruction era. It forces people who face discrimination simply for who they are to fight against two struggles: Not only do they have to call for their humanity to be respected by political movements dedicated to denying it from them, but they also have to sidestep the enablers, many of whom drape over themselves the reasonable label of “moderates,” who view any principled anger from their side as unhinged fanaticism.

Domise encapsulates the view of the Left succinctly here: Conservatives are a threat to human rights, and thus can be accurately referred to as fascists. They do not treat others as human (again, Domise and others simply ignore the fundamental premise of the pro-life movement: that killing pre-born human beings in the womb is a violation of human rights), and thus don’t really deserve to be treated as humans themselves. Domise even invokes Martin Luther King Jr. and blusters angrily that conservatives have no right to speak his sacred name, although the civil rights leader’s views on homosexuality will have Antifa heading towards his memorial with jackhammers any day now.

Domise—and Maxine Waters, and all the rest—stop just short of saying that violence should actually happen. They simply explain why it is reasonable and justified and why those who would face the violence are barely human and thus undeserving of any sympathy. Domise is blunt about that, noting that “while we may be a long way from anything resembling armed revolt, the right of free people to speak out against fascists and disassociate from them is not up for debate.” But there is an obvious question that Domise leaves unspoken, but permeates his piece: When talk fails—as it will in a polity this divided—what next? Is it morally justified to engage in “armed revolt” against people he consistently refers to as “fascists” for holding positions that were held by Democrats merely a decade ago?

It seems likely that we are all going to get better acquainted with the revolutionary underpinnings of the Left: The fundamental premise that violence is justified if the desired end requires it. They have already recast conservative beliefs that would have been considered banal a few years ago as verbal violence to the point that Ben Shapiro needs 600 police officers to protect him at Berkley. Campuses are the territory of the Left, and if you want a sense of how they react when they feel their territory is encroached on, consider the fact that virtually every conservative speaker—as well as liberals like Sam Harris—need bodyguards to simply give a lecture.

The Left has moved so far on the political spectrum that a gay, pro-choice, pro-euthanasia liberal like Dave Rubin can get called a white supremacist and face hostile crowds of protestors. There is no center anymore, and even respectable progressives can pen pieces for mainstream magazines calmly explaining why conservatism or Republicanism is fascism—and surely people have seen just enough World War II flicks to know how the fascists were beaten. The justification for violence is in place and the will to commit violence is there. The powder is dry and the summer is hot. We can only hope that the Left will decide to stop playing with matches.