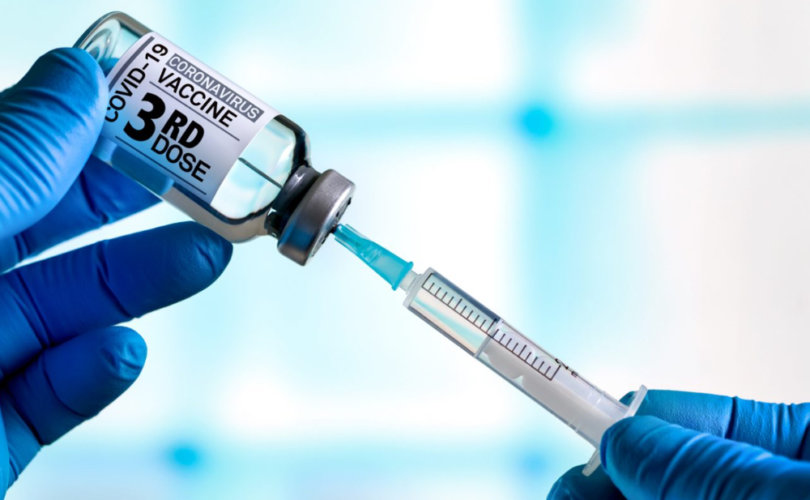 (LifeSiteNews) – In the last week, two left-leaning Catholic writers attempted to raise concerns about particular signers of last month’s “Bethlehem Declaration,” a document that through significant yet condensed argumentation provides multiple reasons why abortion-tainted COVID-19 experimental “vaccines” are not only dangerous and ineffective but “morally illicit.”

Initially endorsed by a group of 52 prelates, scholars, activists, and journalists, the Bethlehem Declaration (PDF)  appeals to the hierarchy of the Church, the lay faithful, and “all people of good will” to “vehemently oppose” the “abortion-tainted experimental injections for COVID-19,” along with mandates for their reception. Since its release, it has garnered more than 11,000 additional signatures.

Christopher Lamb from The Tablet led off last Thursday questioning whether it is appropriate for UK-based theologian Dr. Caroline Farey to have signed the Declaration since it goes against “the Vatican’s position on vaccines.”

He also appeared to suggest the document’s conclusion that the injections were “morally illicit” was in conflict with authoritative Catholic teaching issued by the Congregation of the Doctrine of the Faith (CDF) in December 2020 that said, under certain conditions, use of such abortion-tainted shots can be “morally licit.”

However, the Bethlehem Declaration provides an analysis of the CDF’s “Note” on the topic highlighting its affirmations that such drugs can only be used under certain conditions and argues that these conditions are not met in the current circumstance.

The general treatment of this moral question, by Magisterial teaching and moral theologians, affirming the licit use of such abortion-tainted products, presumes that:

The Bethlehem Declaration, signed by at least four bishops, several priests, theologians and medical professionals,  argues that none of these presumptions are true in the current circumstances respective to available COVID-19 gene-based drug injections. Therefore, according to the Church’s teaching, since necessary conditions are not met, receiving these dangerous abortion-tainted injections remains morally illicit.

In response to Lamb’s inquiry about her signing of the Declaration, Dr. Farey, who has specialized in philosophy and catechesis at the Maryvale Institute in England, said, “It seems to me that the Bethlehem Declaration gives sufficiently serious reasons for not receiving one of the experimental Covid vaccines currently available in the UK.”

“Each of the many points made in the Bethlehem Declaration seems to be true, just, well-researched and relevant to the UK (although set partly in the American context). I hope people read the supporting articles so that they can judge for themselves,” she said.

Lamb also suggested that recent remarks of Pope Francis, lamenting “baseless information or poorly documented facts” with regard to the vaccines applied to the Declaration’s presentation.

In email correspondence with LifeSiteNews, Dr. Farey agreed that the pontiff “does well to lament this [phenomenon], but the Bethlehem Declaration has nothing baseless and nothing poorly documented. If any point is found to be based on documentation less robust than it is purported to be, then we would want to see a courteous and evidence-based refutation.”

In fact, desperately desiring to have a person of standing explain why his incredibly distinguished team’s seemingly well-documented criticisms of the overall COVID-19 enterprise are “misinformation,” or “misleading,” multimillionaire Steve Kirsch has offered to pay $1 million to them for their service. The executive director of the Vaccine Safety Research Foundation has repeatedly invited officials from the FDA, CDC, NIH and elsewhere to show up and explain to them exactly how and why their conclusions are baseless, “misleading,” or “misinformation.”

Needless to say, “they all refused,” he wrote. “It’s so hard to give away a million dollars nowadays.”

Catching this big mainstream wave of charging COVID “vaccine” skeptics with “misinformation” over these matters, without the need to actually show any evidence for it, an adjunct professor of religion in New York followed up with a carpet-bombing spree last Friday accusing several Bethlehem Declaration signers and others with “ignoring church teachings,” “deny[ing] reality,” spreading “vaccine misinformation,” and denying “undeniable facts” while failing to demonstrate the validity of even a single one of her allegations.

Phyllis Zagano, who has made a name for herself as “the foremost proponent of having women deacons in the Catholic Church” and speaking at events sponsored by groups that openly reject Catholic teaching, wrote in Religion News last Friday, condemning the “ravings of the anti-vaccine crowd.”

Among the targets of her forays were Declaration signers Archbishop Carlo Maria Viganò, Deacon Nick Donnelly  and Dr. Farey, who in addition to the achievements of her impressive career also happens to be currently serving as a member of a Vatican commission examining proposals to confer the first degree of Holy Orders on women to the ministry of deacon and is presumed to be a voice for maintaining the perennial teaching of the Church in this matter.

In accusing fellow Catholics of “ignoring church teachings,” to which specific doctrines does Zagano refer? She doesn’t say specifically, but suggests a recent address by Pope Francis, which in no way proceeds from Sacred Scripture or Sacred Tradition, where he personally endorses injections for “the general population,” is in some way binding Church teaching on Catholics.

But this of course is not the case. Ironically, such a suggestion can be rightly classified as “misleading” at best.

In fact, the December 2020 CDF Note on the topic affirms that vaccination is not a moral obligation and therefore “must be voluntary.” And even though, as Lamb highlights, the pope issued a personal  video appeal — “produced in conjunction with the Ad Council”— calling reception of these injections an “act of love,” the Catechism of the Catholic Church affirms that authentic charity “respects others and their rights,” while the common good essentially  involves “respect for and promotion of the fundamental rights of the person.”

A further question for the Holy Father, or perhaps the nameless and faceless individuals he has been relying on for advice in these matters, could be: How would recklessly endangering one’s life by the reception of an experimental gene-based injection, which has killed at least tens of thousands of people, and does not even prevent infection or transmission of a virus with a 99.8% survival rate and safe and effective alternative treatments, be an “act of love”? (See Bethlehem Declaration for sources).

With Kirsch, and tens of thousands of medical experts, we will continue to wait for that elusive “courteous and evidence-based refutation” from those who occupy centers of power in big government agencies, big tech, big media and even the Vatican on how exactly these many highly evidence-based conclusions are “misinformation” or “misleading.”

In the meantime, the arguments presented in the Bethlehem Declaration, that these injections and mandates to take them are “morally illicit,” according to Catholic teaching, remain uncontested and thus naturally stand.

For more information on the Bethlehem Declaration, please see its introductory article, PDF format document, and petition for signing.