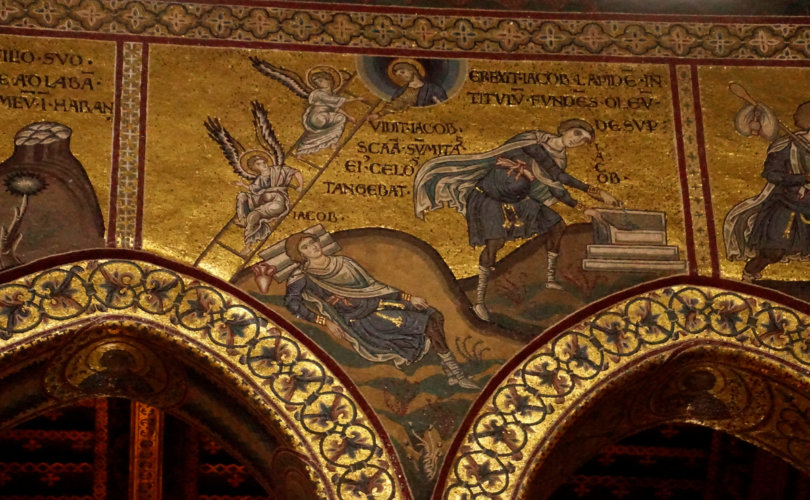 Mosaics at the Cathedral Monreale in Palermo, Italy show the Bible story of Jacob's ladder dream.Shutterstock

October 6, 2020 (LifeSiteNews) — On October 7 each year, Catholics celebrate the feast of Our Lady of the Most Holy Rosary, recalling the victory of Christian forces over the Turks at the Battle of Lepanto in 1571.

Crew members on more than 200 ships prayed the Rosary in preparation for the battle — as did Christians throughout Europe, encouraged by the Pope to gather in their churches to invoke the Virgin Mary against the daunting Turkish forces. Some accounts say that Pope Pius V was granted a miraculous vision of the Holy League’s stunning victory. Without a doubt, the Pope understood the significance of the day's events, when he was eventually informed that all but 13 of the nearly 300 Turkish ships had been captured or sunk. He was moved to institute the feast now celebrated universally as Our Lady of the Rosary. (1)

We are reminded by this simple historical fact that Christianity, although supernatural in origin and oriented to the life to come, is nevertheless realistic in its willingness to confront and defeat evils in this world that would threaten the good of souls delivered by Our Lord’s precious Blood. The Rosary is indeed a weapon by which spiritual and temporal victories are won.

What are the historical roots of the Rosary or rosarium, named after Mary’s title Rosa Mystica? Hilda Graef, seconding the opinion of Fr. Herbert Thurston, asserts that the Rosary arose from widespread popular devotions in the early Middle Ages. Graef hypothesizes that the model of reciting antiphons taken from all 150 Psalms was adopted by unlearned folk in a simplified form:

The antiphons, which would have to be known by heart or be read in a book, were left out, and simply one hundred and fifty Ave Marias were recited, interspersed with Glorias and divided into groups of fifty … They were counted on beads, which had also come into use, at the latest, in the first half of the twelfth century, originally for counting the Pater nosters frequently given as penances. (2)

There is no doubt of the connection between the Psalter of David and the 150 Ave Marias that constitute the full cycle of the Rosary: it is the “poor man’s psalter” that, like the Divine Office, leads us to meditate on the principal mysteries to which the Book of Psalms bears witness. This is part of the reason why some Catholics are uncomfortable with the Luminous Mysteries: not that there is anything wrong with them as such, but the introduction of a fourth set raises the total number of Ave Marias to 200, which destroys this fundamental connection with the liturgical prayer of the Church in the Divine Office, and, moreover, disturbs the triune completeness of the sequence that begins in joy, passes through sorrow, and culminates in glory, a pattern already characterized by the alternation of light, darkness, and light, or more specifically, incarnate light, engulfing darkness, and eternal light. (3)

While not wishing to question the value of modern scholarship, however, historians sometimes go too far in their dismissal of St. Dominic’s role in the story of the Rosary. The fact that the Rosary had precedents is not incompatible with Our Lady entrusting the definitive form of the Rosary to St. Dominic and to his Order of Preachers, who have been its foremost proponents. Hilaire Belloc’s common sense observation holds true:

Most legends have history behind them and, take it by and large, there is more history in legend by far than fantasy. Especially is this true of legends of very high antiquity … Some of these marvellous or unlikely things may well be true; for it is always a safe rule in history to lean strongly on the side of tradition … You have not contemporary documents, but you have a most powerful rooted tradition. And people who think that traditions of that kind arise out of nothing are incapable of understanding mankind or its story. (4)

Neither do those who criticize the Rosary for being too repetitive, “rote vocal prayer,” understand mankind or its story. Repetitious vocal prayer, in Eastern and Western Christianity and even outside of Christianity altogether, has been understood for millennia as a reliable and, some would say, necessary basis for meditation and contemplation.

Classroom pedagogy knows that we remember things better when more of our faculties are engaged in an activity, when the understanding and the imagination interact, strengthening old associations and begetting new insights. The reason we can learn the sequence of 26 unrelated phonemes and letters that make up our English alphabet is that we have attached it to a melody, using more parts of our soul and body. A foreign language learned with eyes, ears, mouths, and even demonstrative physical actions goes in faster and has more staying power than a language learned quietly from reading a book. Other things being equal, an opera is more memorable than a concert of instrumental music because it combines elements of poetry, music, drama, and ballet. Richard Wagner often spoke of his vision of opera as a Gesamtkunstwerk, “a total work of art” that would incorporate all genres into a cohesive whole.

Taking a cue from Wagner, one might call the Rosary a Gesamtgebetwerk, “a total work of prayer,” because it engages the interior powers of the soul—imagination, memory, understanding, will—as well as the exterior powers of speaking and hearing the words, touching the beads, and perhaps seeing an image or statue (depending on how and where one is praying). The Rosary combines vocal and mental prayer, making use of images and ideas, thoughts and feelings, the senses and the intellect. It allows Catholics the freedom to use it in different ways: they might be kneeling, sitting, walking; located in their home or in a church, or traveling; the words present a challenge for the smallest children stumbling over them, and offer comfort to an elderly person who has said them countless times.

By the Rosary, we ascend and descend the ladder in Jacob’s vision (Gen 28:12), ascending to Our Lord as we ponder the mysteries and returning to our neighbor with the charity of intercession. One must begin at the bottom and work one’s way up the ladder. There is no instant leap into divine glory, no simple recipe for tasting God’s goodness. The Almighty is approached with a child’s steps. The traditional Roman liturgy reinforces this lesson by presenting to us four Gospels of littleness in the period from September 29 to October 4. For St. Michael and the Guardian Angels alike (September 29 and October 2) is read the famous scene in Matthew 18:1–10: “Jesus calling unto Him a little child, set him in the midst of them and said: ‘Amen, I say to you, unless you be converted, and become as little children, you shall not enter into the kingdom of heaven’…” On October 3, for St. Thérèse of the Child Jesus and of the Holy Face, the first four verses of Matthew 18 are read once more, ending with “Whosoever shall humble himself as this little child, he is the greater in the kingdom of heaven.” And on October 4, for St. Francis, is read Matthew 11:25–30, in which we hear Our Lord pray: “I praise Thee, O Father, Lord of heaven and earth, because Thou hast hid these things from the wise and prudent, and hast revealed them to little ones.”

Let us be among those “little ones” who, with the weapon of the Most Holy Rosary of the Blessed Virgin Mary, defeat the proud enemies of the Cross — the world, the flesh, and the devil — as we take up our own Cross to follow Christ into glory.

(1) Feast of Our Lady of the Rosary, CNA, https://www.catholicnewsagency.com/saint/feast-of-our-lady-of-the-rosary-617.

(3) I do like to point out to the Luminous skeptics, however, that the actual mysteries prayed in the Rosary have varied according to time and place, and that the great Marian theologian St. Louis Marie de Montfort even encourages Catholics to vary the mysteries on which they are meditating. Whether that’s a good idea or not, it seems to me important not to think that the current structure of the 15 Mysteries was delivered fully-formed at the first moment and set in stone. On the other hand, it is by now a centuries-old venerable tradition and its fittingness is past doubt, so one can rightly question any alteration of it.