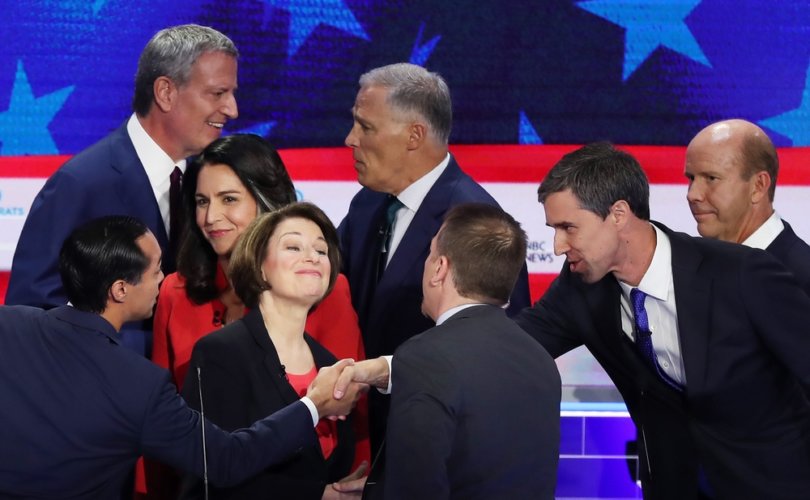 June 27, 2019 (LifeSiteNews) – If last night’s Democratic debate made anything crystal clear, it is that abortion extremism in its wokest and most horrific form is going to be at center-stage for the duration of this presidential election. This crowd of feticide fans wants abortion on demand, without apology, throughout all nine months of pregnancy – and funded by the taxpayer. Abortion was made to sound as if it was not just a necessary evil, but a downright noble act that every woman should feel proud to commit.

Despite that, not a single candidate would say if they would support any restrictions on abortion at all. That is because most of them have already indicated that they support abortion until birth, but are also aware of the fact that while this position might play well with far-left progressive primary voters, it is repugnant to the vast majority of the American people.

That said, the Democratic candidates badly wanted to trumpet their credentials. Former Congressman and failed senatorial candidate Beto O’Rourke lunged at the subject without even receiving a relevant question from the moderators, announcing that “health care also has to mean that every woman can make her own decisions about her own body, and has access to the care that makes that possible.”

Washington Governor Jay Inslee decided that O’Rourke must be one-upped on his support for abortion, and reminded the audience, “I am the only candidate here who has passed a law protecting a woman’s right of reproductive rights in health insurance. I respect everyone’s goals and plans here, but we have one candidate who has advanced the ball. We need to have access for everyone.” Nobody, Inslee insinuated smugly, is as good at the abortion thing as he is.

This left Senator Amy Klobuchar of Minnesota pretty peeved at Inslee, and she hastened to point out that there were three women on the same stage as he that had “fought pretty hard for a woman’s right to choose,” referring to herself, Senator Elizabeth Warren, and Congresswoman Tulsi Gabbard (who, interestingly, was once both pro-life and very socially conservative). Warren agreed very hard with all of this, but still refused to answer a direct question put to her by the moderator: “Would you put limits on abortion?”

Instead, she launched into a laundry list of things she was going to pay for with other people’s money, including birth control and abortion, and then stated that a Warren presidency would see federal protections for abortion passed and signed. It was time, she said, for people to stop counting on the courts to support abortion rights and instead pass federal abortion legislation enshrining it as a right. This, obviously, would be a nightmare scenario for the pro-life movement.

It was former HUD secretary Julian Castro who managed to come off as both cloying and witless in his response to a question as to whether his health plan would include funding for abortion. “Yes it would,” said Castro forcefully, and one got the impression that he would have liked to respond by asking whether bears defecate in the forest. In fact, Castro had come armed with a line designed to make his support for abortion make others on the stage look practically anti-choice.

“I don’t believe only in reproductive freedom,” he announced proudly. “I believe in reproductive justice, and what that means is that just because a woman – or let’s not also forget someone in the trans community, a trans female – is poor doesn’t mean they shouldn’t have the right to exercise that right to choose, and so I absolutely would cover the right to have an abortion.” In addition to that, his judicial appointees would be the most thoroughly vetted abortion enthusiasts that one could possibly imagine.

Castro did not realize – although I’m sure someone has informed him by now– that he screwed up big time. A “trans female” is a biological male who has attempted to transition to female or identifies as one, and cannot get pregnant (or have an abortion). What Castro meant to say – and it would have been fun to see the dopey, solemn responses from his fellow candidates on this – is that trans men – biological females identifying as males – also need abortions. One can forgive him for not having wrapped his head around our latest cultural insanity, but it is revealing that even someone as pathetically groveling as Castro cannot even keep his rainbow categories straight.

The next Democratic debate will in all likelihood highlight another round of fervent loyalty oaths to the abortion industry, with Joe Biden scrambling away from his previous support for the Hyde Amendment and his previous opposition to gruesome late-term abortion procedures. Meanwhile, the Democrats will attempt to berate pro-lifers for supporting Donald J. Trump while attempting to ensure that those who believe babies should end up in bassinets and not dumpsters have nobody else to vote for. Their message last night was crystal clear: The Democrats are very opposed to children in cages at the border, but very supportive of babies in garbage bins behind Planned Parenthood.