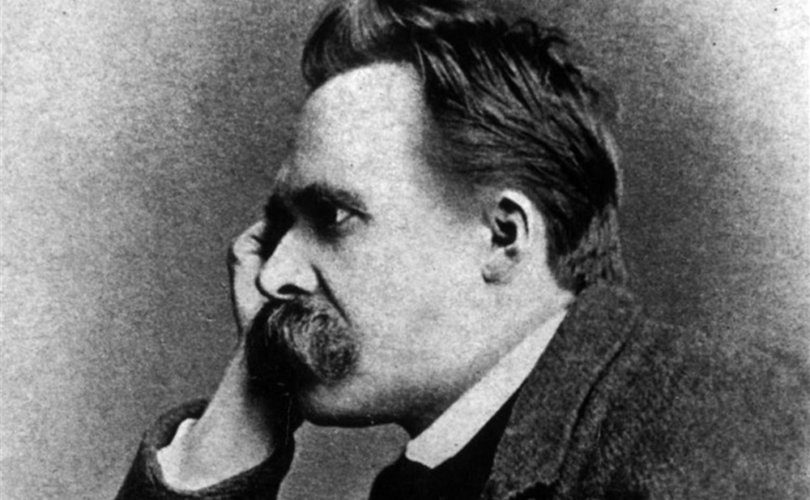 August 2, 2018 (LifeSiteNews) – In spite of being notoriously anti-Christian, the German philosopher Friedrich Nietzsche has left us in his writings many insights that admit of a Christian “re-reading.” It’s like transposing a score from minor to major and changing the tempo and dynamics: you will get a very different piece of music, though many notes on the page will look the same.

As a grad student in philosophy, I copied down the following passage from Thus Spake Zarathustra in my journal:

You are young and wish for a child and marriage. But I ask you: Are you a man entitled to wish for a child? Are you the victorious one, the self-conqueror, the commander of your senses, the master of your virtues? This I ask you. Or is it the animal and need that speak out of your wish? Or loneliness? Or lack of peace with yourself? Let your victory and your freedom long for a child. You shall build living monuments to your victory and your liberation. You shall build over and beyond yourself, but first you must build yourself, perpendicular in body and soul. You shall not only reproduce yourself, but produce something higher. May the garden of marriage help you in that!

Surely there are problems with Nietzsche’s perspective in this passage. But what would happen if we re-read it in a Christian light?

The fundamental reason for marriage is the procreation and education of offspring, in the absence of which one cannot explain why male and female sexes even exist to begin with. Christian parents strive to generate, raise up, and leave behind worthy Christian sons and daughters who will surpass their parents. This will-to-marriage for the sake of descendants who will climb higher and conquer more could well describe the Catholic ideal of matrimony for the sake of rearing saints.

St. Thomas Aquinas says that husband and wife should “pay the debt” to each other both from the virtue of justice, because they belong to each other—justice, after all, is to give what is due—and from the virtue of religion, to broaden the fields of the kingdom of God. There is no bourgeois fluff in this honest picture of marriage: it is a common endeavor, a labor of joy and pain, a meeting-point of creation and sacrifice, done for the reign of justice and religion. Man and woman are given to each other for the sake of producing something higher than themselves: a family, God’s family, the domestic church, citizens of the heavenly Jerusalem.

Nietzsche spoke of “building yourself, perpendicular in body and soul,” so that from an ethically superior man would arise living monuments to a victory over mediocrity and to a liberation from the self-imposed limits of the rest of men. Isn’t Nietzsche, whether he intends it or not, describing nothing other than the supreme victory of Christ on Calvary, which unleashed into the world a power of love that can never be equaled, surpassed, exhausted, or suppressed, and with it, the liberation of mankind from our guilty pact with sin, death, and the devil?

Those words of Jesus as He was about to plunge into His hour of obedience, surrender, and conquest ring out down through the ages, swallowing Nietzsche in their grandeur: “Now is the judgment of this world, now shall the ruler of this world be cast out; and I, when I am lifted up from the earth, will draw all men to myself” (Jn 12:31–32). In the “hour” when He is glorified, the hour when the Son of Man is lifted up on the Cross, drawing to Himself everyone who believes in Him, now is the judgment of this world—not the world as God created it, but the world of fallen man who exalts himself, the world of darkness, hatred, egoism, which the Son of Man exposes as a darkness unworthy of man. Now shall the ruler of this world, the ringleader of hatred, lies, and self-aggrandizement, be cast out, driven out—by what? By the Cross of Jesus. Wherever His Cross is, there is love, love that gives all of itself to the final drop of blood; and this is absolutely incompatible with selfishness.

Hence the devil cannot function, cannot act, wherever this love is present and active. The devil is driven out, or exorcised, from the hearts of believers who are “possessed” by the Spirit of Truth, “dispossessed” of the lying spirit. That is why the traditional rites of baptism in East and West have always contained an exorcism, indeed multiple exorcisms. Whoever clings to the Cross of Christ is freed from the reign of the devil and ushered into the light—that is, eternal life, which is to know the Father and the Son, the glory of an infinite love. This love is the truth of reality. “God is love, and he who abides in love abides in God, and God abides in him” (1 Jn 4:16).

It is the unexpected arrival in our world of Jesus’ testimony to THE truth of reality—the one non-negotiable truth—that leads to krisis, that is, to the separation between light and darkness and to judgment as well as condemnation (all of these being possible meanings of the Greek krisis/krino). The Son of God is sent for this purpose, to testify to the truth and to win over souls who are searching for the truth. “Socratic souls,” we might call them, souls hungry for meaning and hope.

In Jesus Christ, we have the origin, the model, and the full realization of man: not the ridiculous Übermensch or “superman” hypothesized by Nietzsche, but the God-man, King of kings and Lord of lords. No one was ever more “perpendicular in body and soul” than the one who was lifted up on the Cross and who stood up in the resurrection. He drank the cup of bitterness and transformed it into the blood of love. He gave Himself to His immaculate Bride forever, and she in turn gives herself for ever, one flesh, one spirit. From His victory in freedom, from her ardent surrender, proceed innumerable children in this fertile garden of marriage.

How blessed, how privileged we are to be taken up into His fertility, into “the power of an indestructible life” (Heb 7:16), into that cloud of witnesses who conquered the accuser by the blood of the Lamb (Rev 12:10–11).