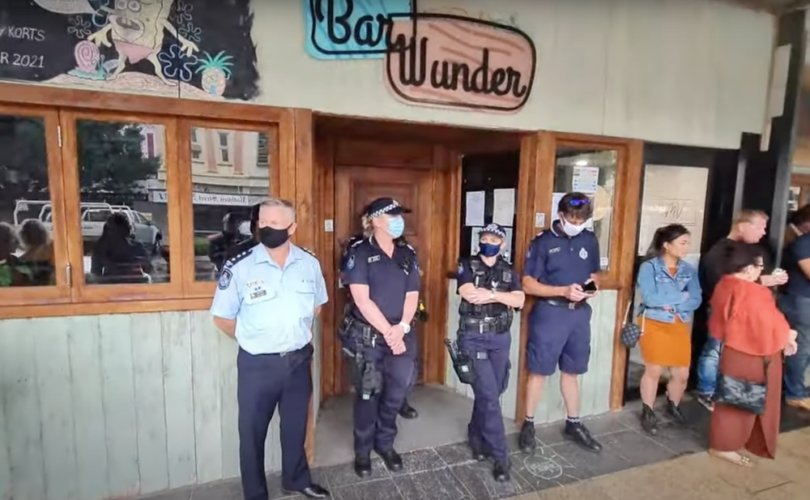 QUEENSLAND, Australia (LifeSiteNews) – In times of political darkness it is often the people who stand up for ethical and legal principles who suffer the most. That is what has happened to the owners of Bar Wunder, Mark McElligott and Fiona Davis, who were arrested in the early hours of the morning in their home for having hosted a private event at their venue.

It is the latest episode in Queensland’s medical tyranny, which has seen citizens’ right to privacy, right to run a business and right to congregate attacked relentlessly. The police tried to shut down the function, but many of the 60 people shouted for them to go. Some asked the police if they felt ashamed that they were enforcing such appalling and unethical mandates against a public they were supposed to serve. No answer was forthcoming.

The police beat a hasty retreat and then, in predictably cowardly fashion, broke into the Davis’s house in the early hours of the morning, a heavy handed tactic usually reserved for violent criminals. No warrant was produced, and the couple were taken to the police station and charged. Fiona was released on bail, but Mark refused to accept the bail conditions, and was detained.

This is similar to the situation that I faced when I was told I could leave if I agreed to cease all political activity. Bail conditions are being repeatedly used to intimidate and force people to comply with immoral and illegal dictates. It is a technique of coercion to silence dissent, and Mark’s refusing to accept them was a gesture of genuine political courage.

At least there was a humorous side. An oft quoted cliche about Australians is that they would bet on two flies crawling up a wall. In this case, some of the people at the function bet on the exact time when the police would break into the Davis’ house and arrest them (there was a winner).

Bar Wunder has stood tall against the illegal mandates, which are not law because they have not been legislated – indeed they cannot be because they would contravene Federal privacy law (which carries heavy prison sentences) and biosecurity law. Federal law should always override state law and the fact that it no longer does indicates that Australia has ceased to be a nation of laws.

Instead, state governments, using a devious work-around, have had their Chief Health Officers issue ‘mandates’. This has compromised the separation of powers, the cornerstone of any parliamentary democracy. The Health Officer is part of the Executive. To state the obvious, the Executive executes laws, it does not make them. Yet none of this seems to matter anymore; yet further evidence we no longer live in a true democracy. The police making these heavy-handed arrests might do well to reflect on that.

Fiona explains that she and Mark were carted off in separate paddy wagons. They were given a breathalyser to assess their blood alcohol levels. Given that this had no relevance to breaching a health order it can only have been another intimidation technique. As Gazcam’s commentator noted, the police “are not there to serve and protect, they are low rent storm troopers of the tyrannical government.”

Mark and Fiona have been defiant in opposing the tyranny for some time. On January 2 they were issued with a direction to close the entire premises until January 31 following what was alleged to be “multiple breaches”. Fiona says one of her bail conditions is that Bar Wunder will be closed until March, when she goes to court.

Rebecca Lloyd from Fair Business Australia says Bar Wunder have been in touch with FBA’s lawyers, and she expects that an allegation of unlawful arrest will be added because the police entered the premises without a warrant.

She notes that it is only legal to do this “if they break the law, and as we all know, a mandate is not a law.” She adds: “They are really trying to make a point because Fiona and Mark are leaders in their community and are really outspoken about these mandates.”

Fiona and Mark are showing no sign of being cowed. The police’s heavy-handed tactics and threats motivated me, precisely because they tried to silence me. They showed their hand and revealed I am threatening to them – which is a compliment, although it is scary to have big enemies.

Fiona and Mark are reacting in the same way. They are showing courage in the face of tyranny, and it is to be applauded.