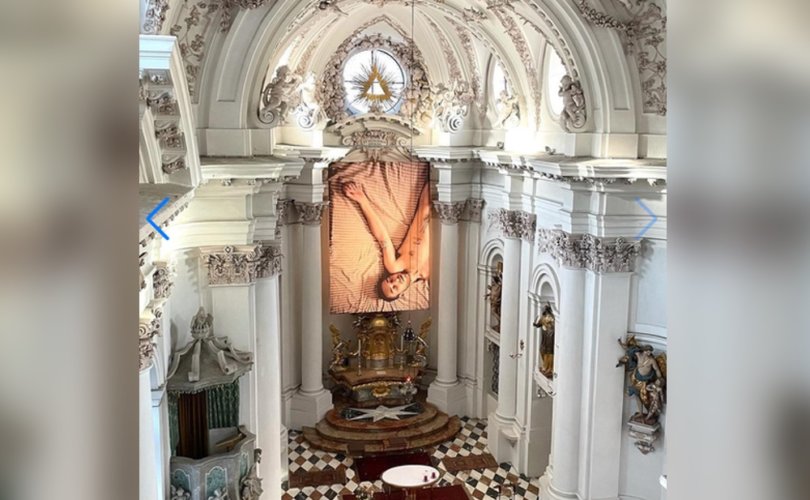 (LifeSiteNews) – The Catholic bishop of Innsbruck, Austria, inaugurated a “Lenten” decoration of the main altar of the historic University church of Saint John Nepomuk, a baroque jewel from the early 18th century. The “decoration” shows an enlarged partial inverted photograph of a naked young man with scars and tattoos lying on a bed and has been placed as an altarpiece above the tabernacle of the former main altar of the church. The piece of contemporary art by Carmen Brucic was specially chosen by Bishop Hermann Glettler, and bears the title: “Tired.”

Bishop Glettler has campaigned for the blessing of same-sex couples in the past (more on that later).

In itself, the more-than-life-size picture (4.5 by 3 meters) is completely incongruous over an altar because it has no religious meaning. But the picture of this nude young man lying on his back in an exhausted attitude, barely missing the display of his genitalia, is doubly scandalous. Besides its obvious indecency in such a setting, it portrays a prominent figure of the “queer” scene in Tbilisi, thus openly glorifying a “gay” activist from Georgia whose image will remain over the tabernacle holding the Real Presence of Our Lord in the Eucharist until the end of Lent.

The said young man, David Apakidze, 23, is half Georgian, half Ukrainian – a somewhat obvious way of presenting the photo installation as a reflection on the current Russian invasion of Ukraine. But he is better known as an activist of the Bassiani club where Georgian homosexuals, drag queens and other self-proclaimed promoters of sexual deviancy had found a “safe space” for techno music, rave parties, and “LGBTQ” performances. The club was founded in 2014 and hosted performances that can only be qualified as hellish. In May 2018, the club was raided by police and closed. Many later joined a public protest dubbed “rave-o-lution days” with crowds dancing non-stop in the streets to techno music. The club was reopened but closed again for many months due to COVID restrictions.

At this time, Apakidze became a member of the “queer Georgian art collective” dedicated to “destroying toxic social norms.”

“Tbilisi-based queer art collective Fungus thrive amid hostility. By creating unapologetically bold art and a supportive community, the group of 20 artists are carving out a safe space for queer youth in a society seeking to marginalize them. ‘Fungus thrives in damp and dark places,’ the group’s manifesto reads. ‘It plays a vital role in the ecology of the biosphere. By decomposing any organic matter, it creates rich soil. A counterculture prospers similarly,” explained The Calvert journal, an online magazine “exploring the contemporary culture and creativity of the New East: Eastern Europe and the Balkans.

“Fungus,” “a very left-wing, liberal base” was formed to hold a queer art show alongside the Tbilisi Mercedes-Benz fashion week one year ago. The plan was stalled by COVID restrictions but the group went on to organize many events linked to the “Rave Revolution.”

This is where Carmen Brucic, the Tyrolean photographer who was approached by Bishop Glettler to contribute to his “tired? lost? displaced?” art show that consists in the display of three “installations” in as many churches in Innsbruck this Lent. The bishop appears to have appreciated an exhibition she set up at the Tbilisi Photo Festival in Georgia in the summer of 2021: under the title “Private Stages,” it portrayed five activists of the “Rave Revolution.” Apakidze was one of them.

Brucic chose to shoot her pictures of the young man in all his “fragility,” lying naked on a bed, adopting different poses. The photo chosen by Bishop Glettler focuses on Apakidze’s inclined face, chest and outstretched arm in a way that apes an inverted Crucifixion, showing the activist’s pierced nipple and multiple tattoos and scars on his inner arms due to self-harm.

Contemporary art always asks for discussion because what the “discourse” about installations are part and parcel of every opus. In this case, it was Bishop Glettler who got the ball rolling by proclaiming that “the photo of the young man in the picture is from characterized by suffering and aggression against oneself.” The photo is “an expression of exhaustion and resistance,” he said, adding that “it is an ambivalence that was interesting to us. The arm forms a kind of ‘V’ as for ‘victory.’ In this respect, it is a very strong fasting and Easter symbol!”

The bishop cannot have ignored Carmen Brucic’s other work, dark and tortured, abounding in images of death, waste, and de-structured human figures. Nor can he have missed the short video showing the artist’s work for the Tbilisi Festival, with its images of transexual men and the full series of the homo-erotic shots of Apakidze.

Apakidze’s own Instagram account shows many equivocal pictures of trans men, tortured faces, homosexuals kissing, and altogether weird and disturbing young people who have no idea of their own dignity. It includes the photograph of a contemporary art exhibit labeled “Abortion Pills” set up – according to the “artist” – as “a corner of the icons of the Virgin Mary, which is an advertising campaign for abortion pills.”

“Abortion is a sacral act in which a woman reclaims the right to reproduce,” Apakidze further comments.

This man’s picture is now hiding the baroque altarpiece of an Austrian church, with the dubious blessing of the local bishop who not only inaugurated the work together with Carmen Brucic last Tuesday, but who claims full responsibility for choosing and organizing what must be a blasphemous installation, given the context.

Hermann Glettler is not unknown to LifeSite readers. In January 2019, he announced that he would “host a set of seminars for divorced and ‘remarried’ couples, at the end of which the couples will be allowed to receive Holy Communion and a ‘celebration of reconciliation and of blessing,’” reported Maike Hickson at the time. These “seminars” were based on Amoris Laetitia, stated the website of the Austrian bishops’ conference.

“Even if a second Church marriage is not possible,” explained Glettler, “we want to assure all couples that they have their place at the center of the Church.”

“We rejoice that people, after experiences of failure in life, take courage again and dare to enter new relationships,” the diocese added.

Two months later, Glettler allowed a “Jesus Clock” made from an upside down corpus with broken arms to be installed in the Spitalskirche in Innsbruck throughout Lent; he also allowed an artist to set up scaffolding featuring an inscription that read: “So long as God has a beard, I will be a feminist.”

In 2020, he said that the Church’s doctrine that women cannot be ordained as priests is an “inequality” that is “difficult to justify.”

In March 2021, Bishop Glettler reacted negatively to the Congregation for the Doctrine of the Faith’s rejection of blessings for same-sex couples, instead encouraging the Church to welcome them: “As a church, we would like to offer all people who are gay, lesbian, or insecure about their sexuality a welcome and a spiritual home in the church – and not only at the point when they are celibate,” he told Kathpress in an interview. He called the CDF statement (that was approved by Pope Francis) a “disappointment for all who have hoped for a clearer sign of acceptance of homosexual couples.”

He added that the statement was a sort of “insult” and a signal telling them: “The way in which you are living is not right.” He suggested that family members of such pairs should bless them instead, putting an end to the discussion about the banning of Church blessings.

Hermann Glettler, a member of the supposedly mainstream traditional “community of the Emmanuel” was named as bishop of Innsbruck in 2017 by Pope Francis, having already made a name for himself as a promoter and personal producer of contemporary art. In 2017, he staged an exhibition of his private art collection in Graz, Austria. His personal website includes a film of a music performance at the Glettler Privat exhibition which featured a defaced image of a statue of the Sacred Heart, a pile-up of kitsch statues of Our Lady of Fatima, and another statue of the Virgin of Fatima next to a primitive fertility statuette of a black woman.

To LifeSite’s knowledge, Bishop Glettler has not been sanctioned for any of this, nor has he been publicly disavowed by the Catholic hierarchy.