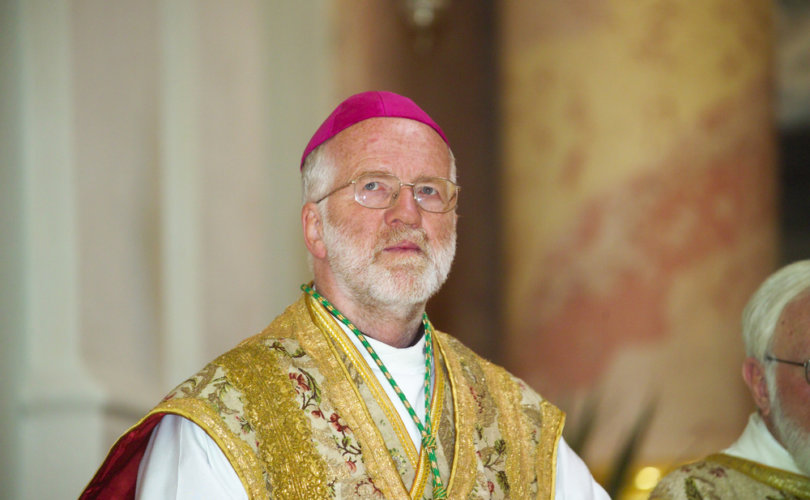 September 17, 2018 (LifeSiteNews) – Austrian Bishop Andreas Laun has tersely said the following about the Viganò report and its claims: “I hope that the Pope will make a statement,” adding that “silence would be a form of cover-up.” Other such voices in European publications have also criticized the pope’s silence.

On September 10, Bishop Laun – the retired auxiliary bishop of Salzburg, Austria – published an article on Kath.net in which he addresses, among other topics, the Viganò report. He says that he himself does not have any personal information about the claims made by the Italian archbishop, but that he himself is “inclined to trust” some of his friends who tell him that the Viganò critique “is correct.”

“Additionally,” Laun adds, “I hope that the Pope himself will make a statement or that he asks his confidants to make an investigation of the individual points.”

“I cannot imagine” that the Viganò report “is a pack of lies,” he explains. With regard to the responses of the Catholic Church under Pope Francis to the Viganò claims, Laun says that to show “only silence would be a form of cover-up and would add more damage to the Church than what has anyway already happened.”

Moreover, Bishop Laun now sees in Austria “the tendency to implement an acceptance of homosexuality in the Church.” He refers back to the recent words of Bishop Marian Eleganti of Chur, Switzerland that one should admit “that in the Church’s clergy, we have been dealing for decades in the majority with homosexual criminals.” Laun welcomes discussions about this matter “in which nothing is being covered-up.” Eleganti himself has publicly stated that the Pope's own silence is a “non-denial” of the Viganò claims.

Many other voices in Europe now argue along the same lines as these two European bishops, who so far are the only prelates from Europe to publicly support Archbishop Viganò.

The prominent French newspaper Le Figaro now asks, “how long will the strategy of silence, as adopted by Pope Francis concerning the sex abuse scandals, last?” As an example, the article continues, the only thing that the Vatican’s communications department published – after last week’s “important papal audience with the head of the U.S. episcopacy – was that it satisfied itself by publishing two pictures [of that meeting].”

Not even a communiqué from the side of the Vatican was issued afterwards.

‘This is the hour of the laypeople’

Both the editor-in-chief and the Rome Correspondent of the Catholic website Kath.net – Roland Noé and Armin Schwibach, respectively – have made statements calling for honesty and transparency with regard to the Viganò report and the McCarrick scandal.

Roland Noé sees that “this is the hour of the laypeople.” He argues, “bishops who now call for a blind obedience toward the Pope, and do not at the same time ask for a clearing-up of the accusations of cover-up with regard to abuse cases, do not serve the Church.” In his eyes, “many bishops now abandon the laypeople and try, instead, to protect a system which continues to cover up abuse cases of high-ranking Church representatives.” Therefore, the journalist argues, since the bishops are too weak “to allow a process of purification,”it “might now be the hour of the laypeople.”

In light of the fact that, so far, the Vatican has not given any answers, Armin Schwibach sees a danger that a struggle in the media is taking place which overlooks the real topic, namely “the fate and the suffering of the victims of ‘predators,’ of predators such as McCarrick and Co.” When speaking about Pope Francis’ comment that he won’t answer questions concerning the Viganò report, Schwibach comes back to the earlier papal words, “Who am I to judge,” and then adds, “today, it is becoming even clearer: this judgment, this ‘yes’ or ‘no,’ is necessary.”

As Schwibach argues, if Viganò’s claims are untrue, it surely would be easy to prove him wrong, with the help of documents.

German academic: Pope Francis ‘seems himself to be part’ of the sex abuse crisis

Over in Germany, Martin Haenel – a professor at the Catholic University of Eichstätt – makes it clear that he is very concerned about the victims of abuse. They “have the right to know that those who abused them are being now named and punished in a fitting way.”

“Any cover-up,” he continues, “is unacceptable since it would continue to protect the abusers […] and at the same time it mocks the victims.” That the Pope is “at peace and relaxed” – as Cardinal Pietro Parolin recently claimed – might be either a sign “of a coming maneuver against a supposed plot” or an “expression of a state of collective denial of reality,” Haenel argues. He quotes the British author G.K. Chesterton, who once said, “silence is the most unbearable response.”

Another German author, Professor Hubert Windisch, recently published an article on Kath.net in which he says that “the current Pope does not only have a problem with the obvious clerical abuse cases, he seems himself to be part of this problem.”

He who does not face this fact, the German theologian adds, “and even though he be a cardinal, a bishop, or a theologian, makes things worse and increases the loss of the Church’s credibility.” Just like Laun and Eleganti, moreover, Professor Windisch points to the root problem of homosexuality as part of the sexual abuse crisis.

Even the German bishops’ website Katholisch.de published an article in which Ludwig Ring-Eifel, editor-in-chief of the news agency Katholische Nachrichten-Agentur (KNA), wonders just “how long can Francis afford to be silent?”

“What the answer will look like,” he adds, “is unclear.” He himself points to the problem that, so far, the Church’s penal law with regard to sexual crimes does not cover some of the acts committed by McCarrick; so far “according to current Church law, everything that McCarrick did with adult seminarians was exempt from punishment!” Ring-Eifel therefore proposes a “tightening” of the Church’s penal law. Additionally, he raises the possibility of establishing “an independent commission that would investigate and control bishops who have violated the duties of their office.”

Finally, Professor Helmut Hoping – a Professor of Theology at the Freiburg University in Germany – has come to the compassionate rescue of those critics of the Pope (first and foremost Archbishop Viganò) who have now been unjustly branded by Cardinal Oscar Rodríguez Maradiaga as “sinning against the Holy Spirit.”

After going through passages in Holy Scripture and also through other doctrinal texts which deal with the sins against the Holy Spirit – such as presumption and despair with regard to one’s salvation, or the disposition to set limits to God’s Mercy – Hoping himself concludes: “To call the Pope to resign or to accuse him of heresy is not a part of the sins against the Holy Spirit.”

“How does an advocate of Bergoglio’s pontificate of mercy, one such as Cardinal Maradiaga, now dare to accuse Viganò of a sin that will remain attached to him forever?” he asks.

Hoping then also reminds his readers that Pope Benedict XVI, during his pontificate, had been confronted with calls to resign. But, “nobody then spoke of a ‘sin against the Holy Spirit,’” comments the Freiburg professor. In light of the fact that Pope Francis himself has promised, with regard to sex abuse cases, “to call all those responsible to an accounting,” Professor Hoping concludes his essay with these words: “Many are waiting that Francis now will let deeds follow upon his words.”