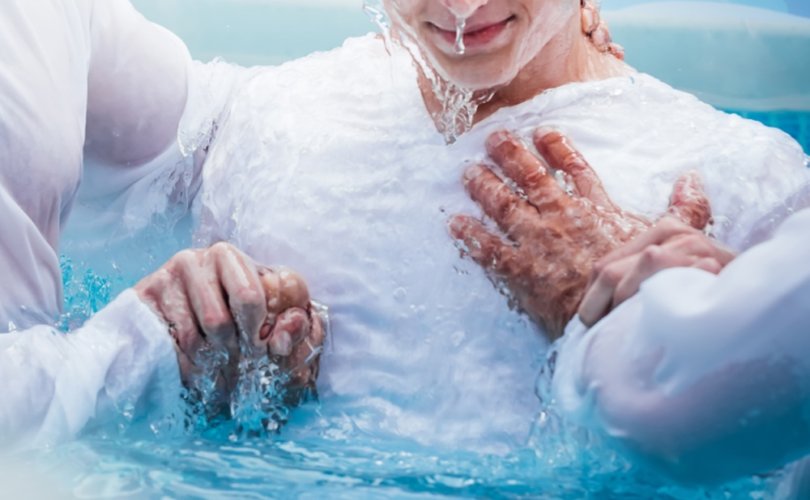 December 14, 2018 (LifeSiteNews) – Each winter as the days get shorter and darkness falls earlier, I begin to look forward to my drive home from the office each day. Halfway home, I drive past a small white-frame church. It is an Anglican church built in 1854, now nearly surrounded by the ancient gravestones of those who once worshipped within its walls. As night creeps into the afternoon, the lights in the church come on, and the stained-glass windows glow a gorgeous gold, bathing the snow around the church in pale yellow light, casting an occasional flicker into the graveyard. There is something quietly beautiful about the sight every single time.

It is strange to consider just how far the Church of England has fallen since the days when this little church was built. Back then, Bishop J.C. Ryle was still preaching from his Liverpool pulpit. Rev. John Newton had been gone for scarcely forty years, and William Wilberforce for less than twenty-five. Back then, it was a church filled with many men and women who truly believed in the Scriptures, and many spent whole lifetimes bringing the Gospel message to the societies around them.

I mention this due to the fact that earlier this week, I spotted this headline in the Telegraph: “Church of England to offer baptism-style services to transgender people to celebrate their new identity for first time.” As it turns out, Canterbury’s rush to irrelevance (clerics warn that steadily plunging attendance numbers will only increase in the years ahead) now includes the bizarre heresy of creating a new sacrament, specifically tailored to celebrate the delusions of “sex-reassignment” surgery for “transgender” people.

The Church of England’s tailspin has been strange to watch, not because they are the first or the only mainline denomination to collapse under the weight of its own compromises. Here in Canada, for example, the United Church campaigned for legal abortion, celebrated the destruction of the Christian ethic of sexuality, and now has at least one atheist minister. They have been only somewhat jokingly referred to as “the NDP at prayer.” But the brazenness with which the clerics of the Church of England have spat on their own heritage has been jarring, to say the least. From the Telegraph:

New pastoral guidance, published on Tuesday, advises clergy to refer to transgender people by their new name, though it stops short of being a baptism. The guidance, which was approved by the House of Bishops on Monday night, also details how elements including water and oil can be incorporated into the service.

It also advises that as part of a special service, they can be presented with gifts such as a Bible inscribed in their chosen name, or a certificate. The guidance notes: “For a trans person to be addressed liturgically by the minister for the first time by their chosen name may be a powerful moment in the service.”

As a central part of the new service, called the Affirmation of Baptismal Faith, the minister lays their hands on the candidate or candidates, addresses them by name, and prays for them. While the Church is clear that this does not constitute a second baptism, it explains that the Affirmation of Baptismal Faith enables people to “renew the commitments made in baptism and in a public setting and provides space for those who have undergone a major transition to re-dedicate their life to Jesus Christ.”

It is understood that traditionalists in the Church blocked a change in the liturgy and stopped this from becoming a new blessing.

I wasn’t aware that there were many traditionalists left in the Church of England, perhaps with the exception of the British writer Peter Hitchens, who wrote a beautiful lament for his church in First Things some time ago:

Now it has almost entirely vanished. You can still catch it at Christmas in a village church when a small child with a strong country accent grapples for the first time with the nativity story in the King James Bible, and the music of the eternal flows into the silent building through his hesitating tongue. The tongue is a fire. Likewise, the voice of the dullest and most banal curate is forced to soar as he reads the unaffected, lovely, heartbreaking words of the 1662 order for Holy Matrimony, or its elegiac twin, the earthy, uncompromising burial service. But these treasures, intricate ancient workmanship polished in use to a soft, deep gleam, are now rarely heard. Blander, more diffident, and less disturbing rituals, substituting syrupy banality for alarming majesty, have replaced them.

When I was small, these lovely, disturbing things were normal. There were no alternative modern services or sensible, rewritten Bibles from which every trace of poetry had been carefully removed. There were no jolly modern hymns. The bloodthirsty, vengeful bits of the Psalms were still sung in the ancient monastic cycle inherited from the Romish past. Priests and ministers (the title depending on how Protestant they were) wore academic hoods and gowns to remind us that they were learned, thoughtful men. These flashes of red and blue were, in fact, their chief adornments, worn atop austere Calvinist black and white surplices. The cathedral into which we filed, sometimes twice a day, was both richly ornamented and austere, a combination I have found nowhere else and which satisfies a profoundly English desire for modesty and restraint, even in the presence of glory…

Those things are well and truly gone. A member of the same clergy that once presided over the majesty of Queen Elizabeth II’s coronation, with the transcendent tones of Zadok the Priest thundering through the cathedral until the pillars seemed to shiver, has now politely asked the faithful to pray that her great-grandson, Prince George, might become a homosexual in order to increase tolerance for the LGBT community. Earlier this year, Anglican clergy urged the British government to ban so-called “conversion therapy” for those with gender dysphoria, and announced their intention to attempt to recruit transgender clerics. And now, of course, there’s the new ceremony to celebrate one's “new” gender.

The Church of England, like so many others, is imploding due to its own utter emptiness, collapsing in on themselves as they are hollowed out. The King James Bible is vanishing, the Common Book of Prayer is quietly being abandoned, and everything believed by the men and women of a century ago and a millennium before that is quietly being exchanged for social experiments a few decades old, with the choirs and the formal readings being exchanged for peppy little ceremonies that celebrate the completion of Joseph’s (now Josephine, mind you) recent castration.