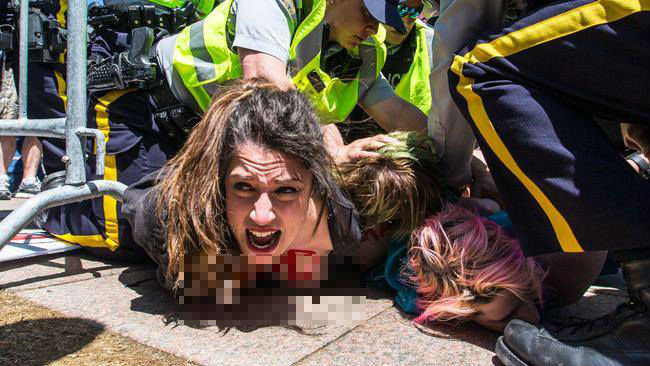 It made me feel a bit sick and sorry for them, actually, to see young girls screaming and struggling with police and being slammed to the concrete in what surely must have been a very painful fashion.

It was a beautiful day in Ottawa for the March for Life. Thousands of people, young and old, packed Parliament Hill. Clergy of every denomination stood in solidarity with the pro-lifers, and politicians emerged from the House of Commons to voice their support for fundamental human rights. With thousands upon thousands of people packing the streets of Ottawa, it was an invigorating day to say the least.

1. The four topless Femen girls, who rushed the stage just as MP Stephen Woodworth began speaking, seem very sad and angry. I’ve never really understood their tactic of going nude as a means of protest, even though I’ve been the target of it a few times now—it seems so counter-productive. I understand that they are pro-abortion and hate the idea of a pro-life protest, but the idea that voluntarily shedding their dignity would in any way promote their beliefs is a bit bewildering. It made me feel a bit sick and sorry for them, actually, to see young girls screaming and struggling with police and being slammed to the concrete in what surely must have been a very painful fashion. I wished someone had some blankets or something to cover them up. I was encouraged to see that as the police grappled with them, most men in the crowd averted their eyes. As Matt Fradd noted, “It is a manly thing to treat a woman who has forgotten her dignity with dignity.”

2. Those who oppose the pro-life movement aren’t even trying to pretend they have any semblance of an argument anymore. The Femen antics aside, I have to say I was actually surprised by the large crowd of pro-abortion protestors near Bank Street, being held back from the marchers by barricades and police officers. Many of them were wearing masks, chants of “F**** the police” rose up occasionally, and the crowd seemed to be seething and hostile. It was not a point-counterpoint situation: they were definitely angry. There were the typical signs, of course—“Keep your rosaries off my ovaries” and such—but what took me aback was the Hammer and Sickle flags flapping in the wind. It wasn’t just one, either—there were at least six of them flying throughout the group. The idea that people protesting the March for Life would fly the flag of Stalin, the banner that presided over the murders of millions of people, was just a bit too rich.

3. The movement is growing. I’m not the kind of person who tosses out March for Life crowd estimates as proof of the strength of the movement—it’s results that count. But the number of young people who I spoke to who are there not just because they had a day off school, not just because they wanted to have fun, but because they actually want to get involved in the pro-life movement in some meaningful capacity was very heartening. Many of them stopped me along the parade route to tell me that they’d attended our presentations across the country and couldn’t wait to get involved in day-to-day activism.

4. The time to act is now. This is not news to most of you, surely. But I thought Eric Metaxas, the keynote speaker at the Rose Dinner after the March, put it very well. Eric Metaxas is the author of the historical biographies Bonhoeffer as well as Amazing Grace, a biography of William Wilberforce that I have all our interns read every summer. He used historical examples to inform us that if Christians in today’s day and age do not stand up, then we are in grave danger. Imagine, he asked the crowd, if every Christian would rather go to jail than comply with ungodly policies. The jails would be clogged, the system would shut down, and the next day, we would see a very different country. Some may laugh at this as hyperbole, but there are signs across North America that such principled non-compliance will very soon be necessary. Metaxas used the example of Ronald Reagan’s famous “Tear Down This Wall” speech at the Brandenburg Gate. He was warned not to say such things—but he ignored them, and this voice proved prophetic. Christians have to stand up together, said Metaxas. The rotten wall won’t come down by itself. But if we push together—then we can perhaps succeed. No matter what we have been given—time, treasure, talent—God is calling us to use it. An inspiring and sobering message indeed.