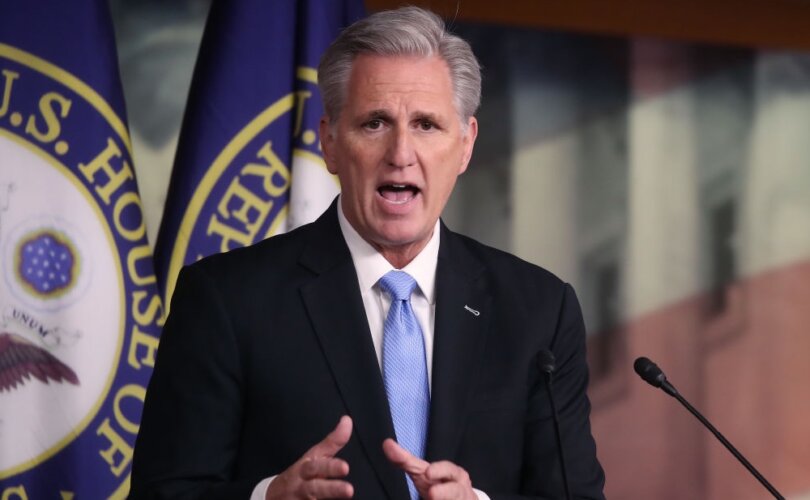 Originally published December 4, 2022, this blogpost has been updated to include material by Stephen Kokx.

(LifeSiteNews) – In the ongoing drama of the Republican majority selecting a new Speaker of the U.S. House of Representatives, only a handful of the GOP members in the newly installed 118th Congress seem to be in tune with the vast majority of American conservatives.

While former House Minority Leader Kevin McCarthy of California has long been favored by the D.C. Republican leadership to replace outgoing Democrat Nancy Pelosi, many grassroots conservatives fear that McCarthy is a creature of the D.C. swamp rather than a disrupter who is ready, willing, and able to bring much needed change to the legislative body.

So far, McCarthy has lost on six consecutive roll-call votes, with more votes scheduled for today.

Mounting pressure is being placed the 20 or so holdouts, not only from Elon Musk (who recently expressed support for McCarthy on Twitter) but also from Fox News anchor Sean Hannity. But other prominent Republicans and conservative activists have countered those moves by writing a letter of support for those who are resisting McCarthy.

Dr. Robert W. Malone, a disruptor in his own right, warned yesterday that McCarthy appears to be beholden not only to the entrenched D.C. duopoly, but outside the borders of this country to giant multinational corporations and the World Economic Forum (WEF), which embraces an array of anti-human policies and is the driving force behind the global elites’ plan for a “Great Reset.”

“The unelected World Economic Forum, a trade organization representing the interests of the thousand largest companies in the world, has already chosen and announced the next leader of the U.S. House of Representatives,” Malone cautioned.

“Let that sink in for a moment.”

While the link that Malone provided was not an endorsement by the WEF of McCarthy for House Speaker, Malone noted that McCarthy is indeed a WEF-approved politician.

The unelected World Economic Forum, a trade organization representing the interests of the thousand largest companies in the world, has already chosen and announced the next leader of the US House of Representatives.

Let that sink in for a moment.https://t.co/Jgx40CFGOB

Malone’s concern over where McCarthy’s loyalty truly lies is also shared by his chief media critic Tucker Carlson, who has pointed out that McCarthy – who often positions himself as a champion of free speech – has actually been one of Big Tech’s beneficiaries in recent years, having received significant amounts of campaign donations from cryptocurrency groups and Google, Facebook, and others.

Last year, Tucker did a segment exposing McCarthy’s closest political adviser, Jeff Miller, as someone who has made millions of dollars lobbying on behalf of Amazon and Apple.

TUCKER: This week, members from both parties announced they supported anti-trust legislation that could break up Big Tech…

But KEVIN MCCARTHY opposes it. Why? One possible explanation is his top outside adviser — Jeff Miller, a lobbyist for Apple & Amazon. pic.twitter.com/Yzo0IqrK6c

McCarthy’s apparent hypocrisy on the issue was also noticed by Florida Congressman Matt Gaetz when leaked audio revealed McCarthy wanted Twitter to “take away” the accounts of GOP lawmakers who questioned the integrity of the 2020 election. McCarthy also told Wyoming’s Liz Cheney that he intended to ask Trump to resign following the January 6 protests.

Gaetz, McCarthy’s chief nemesis in his bid for Speaker this week, was also singled out by McCarthy in his remarks as being someone who was saying things about January 6 that were irresponsible. Gaetz subsequently shared a video about McCarthy’s comments on YouTube:


It’s perhaps for good reason that GOP Rep. Chip Roy declared from the floor of the U.S. House before yesterday’s first ballot for Speaker, “This country needs a change. This country needs leadership that does not reflect this city, this town that is badly broken.”

Roy also warned that the House “is not at the place where we need to be to guarantee we’re going to be able to stand up in the face of the swamp that continues to step over the American people on a daily basis.”

“Do you think that the American people want us to continue down the road of what we’ve been doing?”

The status quo has to END. pic.twitter.com/7Ds9A3lgf4

“If you want to drain the swamp, you cannot put the biggest alligator in charge of the exercise,” Gaetz himself said.

Gaetz further commented that in behind the scenes negotiations, McCarthy rejected proposals to hold votes on term limits, on balancing the budget, and on the Texas delegation’s plan to manage the southern border.

“We struggle with trust with Mr. McCarthy,” Gaetz remarked. “We will not continue to allow the ‘Uniparty’ to run this town without a fight.”

“This town desperately needs change,” he further said, “and if it’s a few of us who have to stand in the breach to force it, we’re willing to do so for as long as it takes.”

Other lawmakers have suggested that the best candidate for the job might be a reluctant one. Representatives Jim Jordan and Byron Donalds, an African American from Florida, have been put forth as an alternative to McCarthy. While they have mustered a total of only about 20 votes on each of the six ballots taken so far, that has been enough to prevent McCarthy from clinching the Speakership.

“He eventually changed his mind on both. Perhaps the best person for House Speaker isn’t someone who wants it so badly,” Biggs suggested.

He eventually changed his mind on both.

Perhaps the best person for House Speaker isn’t someone who wants it so badly.

In what is viewed by many as a huge misstep, former President Donald J. Trump, once thought to be the “Disruptor-in-Chief,” issued an endorsement of McCarthy early this morning.

“Some really good conversations took place last night, and it’s now time for all of our GREAT Republican House Members to VOTE FOR KEVIN, CLOSE THE DEAL, TAKE THE VICTORY,” an enthusiastic Trump said on Truth Social.

“REPUBLICANS, DO NOT TURN A GREAT TRIUMPH INTO A GIANT & EMBARRASSING DEFEAT. IT’S TIME TO CELEBRATE, YOU DESERVE IT. Kevin McCarthy will do a good job, and maybe even a GREAT JOB – JUST WATCH!”

Trump’s endorsement of McCarthy has yet to have the effect it intended. Gaetz and others have only dug in their heels in recent hours, and seem completely unaffected by it, believing that they, and not Trump, are the true heirs of the MAGA agenda.

In fact, Boebert, while addressing the House floor yesterday, directed her remarks squarely at the former president, telling him, “I think it actually needs to be reversed. The president needs to tell Kevin McCarthy that, sir, you do not have the votes and it’s time to withdraw.” Later in the evening, she squared off against McCarthy surrogate Sean Hannity on Fox News.

Hannity: “McCarthy has 203 votes. Your side has 20. Why is it time for him to withdraw and not you when he has so many more votes?”

Conservatives on social media have also highlighted McCarthy’s foreign policy stance as a major concern. Thus far, he’s taken the neocon position of supporting billions of dollars in continual aid packages for Ukraine, as has pretty much every other Republican in Congress.

America First Congresswoman Marjorie Taylor Greene, who is, oddly enough, supporting McCarthy as Speaker – thereby causing a riff with her long-time ally Gaetz – has recently expressed a desire to audit funds being sent to the besieged nation. McCarthy has only suggested that a more generic “oversight” regarding Ukraine money might be needed.

While attending Ukrainian President Zelenskyy’s address at the Capitol last week, McCarthy wore a Ukranian flag lapel and pocket square, a move seen by the populist wing of the party as a sign he’s going to continue to push the globalist foreign policy approach spearheaded by the likes of Mitch McConnell and others in the US Senate, an approach Trump adamantly campaigned against during his 2016 bid for the White House.

Texas Rep. Dan Crenshaw, seen by many foreign policy realists as the heir to the late Republican Senator John McCain, was predictably incensed at the approach taken by Gaetz and his colleagues, whom he called “terrorists.” Tucker Carlson took issue with those remarks on his Wednesday program.

Tucker on Dan Crenshaw’s “terrorists” comment: “Over the past few years pretty much every part of the war on terror has been turned against the domestic political enemies of the neocons. What you just saw is the snarling face of the donor class.” pic.twitter.com/Ygd5ptmjcD

McCarthy’s approach to social issues has also raised eyebrows on the political right. In October of 2021, he was asked about homosexual “marriage” after then-House number three Liz Cheney expressed support for it. He replied by saying, “Look, same-sex marriage is the law of the land and it’s what America holds and that’s the law of the land.”

After GOP Rep. Liz Cheney told @60Minutes she was “wrong” to oppose same-sex marriage, reporter asks Kevin McCarthy if his views have changed.

While McCarthy certainly deserves praise for voting against the misleadingly named “Respect for Marriage Act,”  he did not instruct House Whip Steve Scalise to officially whip members to vote against the pro-LGBT “Equality Act,” a sign that could indicate his Speakership would continue to moderate the party on social issues so more so-called gay-conservatives can find a place of welcoming. The same could be said for President Trump.

“By failing to deliver any meaningful victories or pushback against the progressive, anti-American movement, the Republican Party has become the party of losing,” Terry Schilling, president of the socially conservative American Principles Project, told the Daily Caller recently. “That’s what this saga is really about — making the Republican Party an effective and meaningful opposition to the Democrat’s anti-American agenda that seeks to destroy our country, religion, families, but most sacredly, our children.”

A decade ago, Rep. McCarthy, along with former House members Paul Ryan and Eric Cantor, was one of the self-proclaimed “Young Guns” of the Republican Party who saw themselves as the future of the GOP.

However, despite the trio’s claim to be “a new generation of conservative leaders,” they have been resoundingly rejected by grassroots conservatives who want better representation from the party. Ryan resigned his role after having an admittedly contentious relationship with then-president Donald Trump. He has since re-emerged in DC as a fellow at the libertarian-leaning American Enterprise Institute, expressing publicly his desire for the party to move beyond Donald Trump in 2024. Cantor, who shockingly lost his House seat in 2014, has quietly entered the private sector and has not looked back.

This is an ongoing story, and LifeSiteNews will update as the balloting continues.