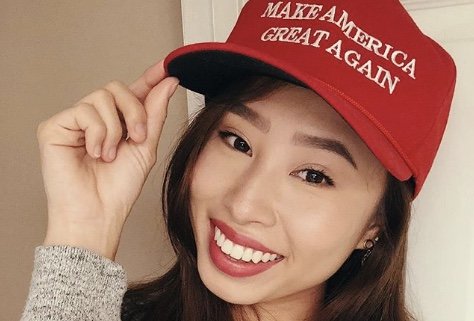 July 23, 2019 (LifeSiteNews) — When a beauty queen was stripped of her Miss Michigan title because her old social media postings were deemed “offensive, insensitive and inappropriate,” she declared, “Coming out as a conservative is way harder than coming out as gay in today's society.”

Kathy Zhu tweeted a screenshot last Friday of an email she had received from the pageant’s governing organization, explaining that her title had been revoked after tweets had been discovered concerning her “refusal to try on a hijab.”

“It is honestly sad that the left refers to statistics and facts as racist and insensitive,” Zhu said in a statement to The Independent, UK.

“I am very glad that I now have the opportunity to speak out about the unjust treatment of conservatives,” continued the University of Michigan student.

Zhu, who was just old enough to vote in the 2016 Presidential election, also appeared in a YouTube video titled “Why this 18-year-old is voting for Donald Trump.”

Zhu is 100 percent correct. I should know; I’ve done both.

I agree with Zhu: Coming out as conservative is far harder than coming out as gay. I should know; I’ve done both.

I “came out” as gay after my wife and I divorced in the late 1990s. I was amazed at the acceptance I experienced. No one condemned me or my predilections.

My experience “coming out as a conservative” to other gays, lesbians, and my liberal neighbors and colleagues, on the other hand, was often exceedingly unpleasant.

As I began forming friendships with other gay men in the Washington, D.C. area, one thing quickly became very clear to me: I had better keep my political and social opinions to myself. Or else.

When I began dating a man who was related to a powerful Republican member of the U.S. House of Representatives, he felt obligated to disclose the fact up front as if it might be a deal-breaker. I felt sorry for him: The look on his face was pained, as if he were confessing some unforgivable crime. He was astounded when I congratulated him and told him I thought his cousin was one of the best men in Congress.

Once when we were about to attend an event with his extended family, he warned me to keep my mouth shut about being a conservative because it would ruin everyone’s evening. He went so far as to assure me that one of his siblings who taught political science at a prestigious Washington, D.C. university would be so enraged he would storm out of the gathering in disgust.

Another time I was confronted by his sister-in-law who was clearly mortified that her husband’s brother was dating a conservative. And more than that, she demanded to know, “How can you be a conservative? You’re gay!”

I looked her in the eye and countered, “You’re an adult. You have children. How can you be a liberal?”

I would later tell that story as I traveled around the country testifying before state legislatures and others about the dangers of same-sex marriage:

There are lots of other examples, such as the time I went to a party where most everyone was a member of the Metropolitan Community Church, with its exclusively LGBT  congregation. I was engaged in a long conversation about art and architecture with the ‘wife’ of the female minister who led the Church. Thirty minutes into our discussion, I mentioned I was a conservative and she just drifted away without saying a word, as if I were suddenly a pariah.

Another time I submitted an opinion piece to The Washington Post titled “Why I oppose same-sex marriage.” Before publishing my commentary, I had to speak with three different editors because none of them could fathom that anyone who is gay could disagree with the notion of “gay marriage.” I had to repeatedly assure them that I was indeed “gay.”

Within 24 hours of the article’s publication, a page was created on a gay website with my picture, excerpts from my writings, and more than 100 mostly vile comments posted, all meant to intimidate and prevent folks like me from speaking up.

One gay man in Italy found me on Facebook and sent me this note, saying I would be responsible for the suicides of gay youth:

If Maryland would approve the repeal … i think that every suicide of a gay young in Maryland will be caused a little by your piece.

Needless to say, over time I lost all of my gay friends.

This story has a happy ending. The backlash I experienced simply for being a conservative contributed to my being radicalized. Not only did I become an outspoken critic of same-sex marriage in the years leading up to the Supreme Court’s devestating Obergefell decision, I was moved to reject homosexuality and to live chastely.

Eventually, my wife and I put our marriage back together again. That was eight years ago. Not long after that, I returned to full communion with the Catholic Church.

Moral of the story: Conservatives are tolerant and possess human compassion; Liberals have no need for you if you disagree with them.