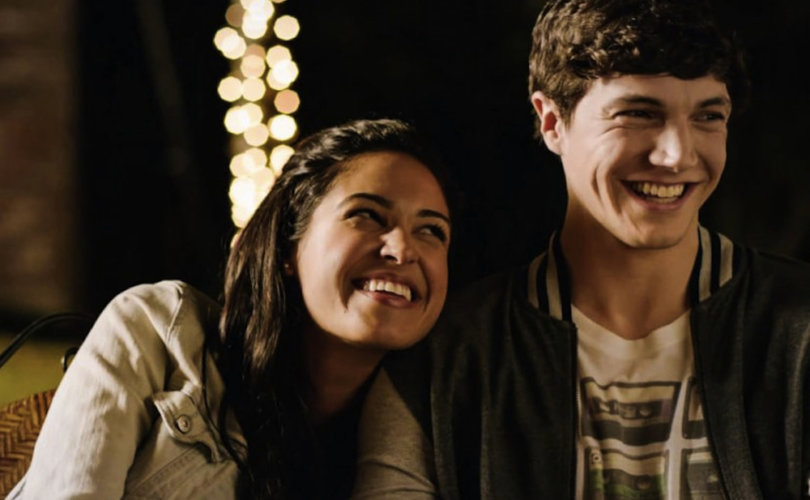 Moriah Peters and Chris Massoglia in 'Because of Gracia'

HAWAII, August 29, 2017 (LifeSiteNews) — Last night, I watched the new pro-life teen movie Because of Grácia, and I loved it. It’s a movie with serious themes and a small budget, so I wasn’t expecting charismatic stars, or sparkling dialogue, or a great soundtrack. However, there they were in abundance.

In fact, I liked the classroom scenes best. This is perhaps not surprising as the writer-director is a veteran schoolteacher. Massive respect to Tom Simes for writing the potentially villainous Mr. L as a heroic defender of free speech — a value Grácia tests to its limits.

That the characters are fully drawn is a major strength. An overly amorous character seems less a vile seducer than a victim of his own hormone-addled teenage brain. The impossibly confident Grácia, whose crinkle-eyed smile lights up the screen, trembles at the thought of exposing her un-PC beliefs to her classmates. The almost-too-cool-for-school Mr. L loses his temper when Grácia flicks him on the raw. Goofy, daydreaming Chase has a transformative hidden talent. Even one of the local Mean Girls has a change of heart.

Click here for group tickets to Because of Grácia

From Bella to Grácia with Love

Today, I spoke to a big fan of Because of Grácia: pro-life activist and film producer Jason Jones. Jones was an executive producer for the prize-winning, pro-life favorite Bella. As October marks Bella’s 10th anniversary, Jones wants to celebrate by promoting Grácia.

“It’s such a cool, soulful film,” said Jones. “What I admired a lot about it was [how much was done with] a super-small budget. And I liked the dialogue. I thought the dialogue is going to be really appealing to young people, and it had a realism to it.”

The realism of the dialogue spills into the action and the teenagers’ feelings for each other.

“I liked the way [the film] captured … the life of young people and the awakening of young people to eros, but they did it in a way that’s not scandalous,” Jones added. “And it was beautiful — in [contrast to] a culture in which there’s not even dating anymore with Tinder, ‘swipe-right’ and all of that. I’m 45, so when I was that age, you know, there was a beauty in the awakening of noticing girls. I think that this film captured that, and it really promoted chastity. And I loved it.”

Jones was effusive in his praise of writer-director-schoolteacher Tom Simes:

“It’s obvious from the film that he’s very thoughtful, very empathetic. He’s a real keen observer of his students. I liked that about the film. I liked that it was fun. It deals with the most serious topic in the world, but in the end it’s … a fun film. And I like the music. The soundtrack is great.”

Jones thinks the popular quality of Because of Grácia makes it perfect for teens.

“It’s not Bella in that Bella had this high art quality to it,” he said. “But in many ways Bella might have gone over the head of the average teenager, whereas Because of Grácia goes right to the heart of the average young person.”

Jones, who has produced 11 more films, came to the industry by way of the pro-life movement. But he’s still a pro-lifer first: “For me, my interest in film has always been instrumental.”

He signed on with Bella when he was in Mexico City for a pro-life meeting. U.S. Congressman Chris Smith’s wife Marie asked Jones if he’d like to meet a telenovella star. “I told her that the last thing in the world I wanted to do was go downstairs and meet a telenovella star,” said Jones. “But she said, ‘He’s really pro-life,’ so I went downstairs.”

The star was Eduardo Verastegui, and he invited Jones to the first private screening of Bella.

Jones’ background was in political campaign management and non-profit public relations. He had produced a documentary and had a radio show, but the idea of producing a major feature film was “like pitching for the Yankees,” Jones said. “You’d love to do it, but it’s just not in the cards.” With Bella, however, Jones wanted to help.

“When I sat in the private screening room in Mexico City, and I saw this very rough, early version of [Bella], I looked at Alejandro [Gomez Monteverde, the director] … and I felt so privileged,” Jones recalled. “I thought, ‘This is going to be the most talented director of my generation, and here I am at his first private screening of his first film. I can tell my [future] grandchildren about this. Then I thought, ‘If this film could get a broad distribution, it will forever change my country. It will change the way my country views abortion.’”

An executive producer asked Jones if he could find Bella some distribution money, and he did.

Interestingly, Monteverde and Verastegui had no idea they had made what would become a major pro-life film.

“They wanted to make a film that celebrated Latinos,” said Jones. “Eduardo and Alejandro …. loved the story. They didn’t realize that they were stepping on the third rail of American politics. They’re Mexican.”

Jones was impressed by how hard Bella’s star, Verastegui, worked to promote his film and the pro-life cause:

“After Bella, I really believe this — I might be biased — being pro-life became mainstream and acceptable. Eduardo helped us walk with a swagger, because he was everywhere.

“It’s not that the film had such great distribution — a little less than a thousand cinemas. But a confidence was infused in the movement because Eduardo was such an articulate spokesperson at all these pro-life events, but then also on the Today Show and all the shows he was doing relentlessly.”

There followed an “explosion” of pro-life films from Hollywood: October Baby, Voiceless, Gimme Shelter, Juno, Knocked Up, Waitress, and August Rush. “I think Bella was the beginning of that,” said Jones. “And Bella led to Crescendo … and Crescendo inspired Sing a Little Louder. You can trace all this back to Bella. And here we are 10 years later and north of us [in Saskatchewan] a director-writer-producer-schoolteacher with a handful of friends … put some money together to make this beautiful film [Because of Grácia].

Now Jones is putting the muscle of his “Movie to Movement” organization behind Because of Grácia because of the impact Bella had in saving lives.

“We received over a thousand letters from young girls who were scheduled to have an abortion or were leaning towards … abortion and [then] saw Bella. They kept their babies because of Bella and wrote to us about it. So Bella changed the destiny of all these families and all these children because we had a big opening weekend and could expand [from 67 cinemas to almost 1,000].”

“I would like to see the same thing happen with Because of Grácia.”

As a pro-life activist, Jones thinks of successful pro-life films as amazing tools. “This film Because of Grácia is a dream come true that will allow us to touch the hearts — if we’re successful, and the movie business is the hardest business in the world — of countless young people.”

A similarity between Bella and Because of Grácia is the commitment of the stars to promoting a culture of life.

“In Eduardo, we had this brilliant, handsome, articulate spokesperson for our cause,” said Jones. “A lot of other pro-life films have had stars who were bashful about speaking beyond their roles. But Chris Massoglia, who plays Chase, he is just so courageously pro-life. And this is a Hollywood actor, you know? So Chris is this brave, fearless spokesperson. I love following him on social media because he’s always hammering Planned Parenthood.”

“And then you have Moriah Peters. She’s just this charming … beautiful personality. She stood up to the producers of American Idol when she was trying to get her career going. They mocked her for never having kissed a boy. They told her to go back and kiss a boy and then come back to Hollywood. So she went back, she got married to a young man from the very popular band King and Country, kissed him, and now she’s back in Hollywood with a big movie.”

“We’re not going to end abortion with just one movie.”

When it comes to pro-life but secular box office giants, Jones refuses to get drawn into a competition.

“I love Juno,” he said, “and I think Juno did a ton for the pro-life cause, but here’s the difference: Eduardo, because of the success of Bella, raised tens of millions for pro-life causes.”

“Juno had such a successful distribution, it was so hip, it was so cool, and it was really aimed at the [right] audience. But I look beyond the film. I look at what the directors, the actors are doing to influence culture.”

Thankful for the success of Bella and his other films, Jones wants to promote Because of Grácia as a way of “paying it forward.”

Because of Grácia opens September 15 in selected cinemas across the USA. To find the cinema nearest you, click here.​