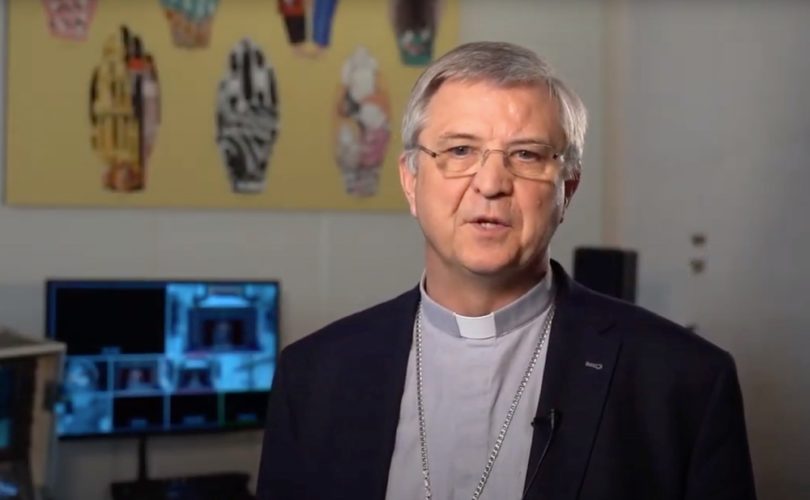 Bonny is currently in Germany where he met with the German bishops at their annual fall meeting in Fulda, spoking with them behind closed doors. In this context, he gave Katholisch.de, the official website of the German bishops, an interview, in which he encouraged the German bishops to continue the work of their Synodal Path which recently declared recently that homosexual acts are “not sinful.”

At the end of this Katholisch.de interview, Bonny was asked about the reaction to his own actions, since he himself in 2015 already advocated for a blessing of homosexual couples. The interviewer reminded him that he was still a bishop, even though he advocated for such a blessing.

Bonny responded: “Yes, I am still a bishop. I was called to Rome, and there I said what was my opinion about it. I have also personally spoken with Pope Francis about it.”

When asked about the result of this conversation with the Pope, Bonny answered that “I know now what he thinks. That is for me the most important thing.”

The Belgian bishop insisted that the Pope is also in agreement with him and his Flemish fellow bishops and their newly released guidelines. “And I know that our guidelines for the blessing of homosexual couples, which we recently published, are in line with Pope Francis,” he said, adding that this was important to him “because communion with the Pope is sacred to me.”

It is the personal responsibility that the Pope has given us bishops and that he also supports. However, the same topics do not have to and cannot be discussed worldwide at all times. Moreover, the Pope does not have to write everything down on paper. Just as I as a bishop do not record every conversation on paper.

When the Vatican’s Congregation for the Doctrine of the Faith came out with a ban of the blessing of homosexual couples in March last year, Bishop Bonny expressed he was “angry” at Rome and said he felt “shame” for his Church.

He then also referred to the Pope himself when saying that “this responsum is not an example of how we can walk a path together. The document undermines the credibility of both the ‘synodal path’ advocated by Pope Francis and the announced year of work with Amoris Laetitia. Will the real synod please stand up?”

Now, under the growing pressure across the Universal Church – with Cardinals Gerhard Müller and Willem Eijk, among others, raising their voice of opposition – Bishop Bonny saw it fit to come out even more explicitly about the Pope’s intentions.

It is to be seen how the Vatican will respond to this new interview by Bonny.

— Article continues below Petition —
Join Bishops in calling out Pope Francis' statement for contradicting the faith
Show Petition Text
5765 have signed the petition.
Let's get to 6000!
Thank you for signing this petition!
Add your signature:
Show Petition Text

LifeSite reported that Duigou described his private conversation with the Pope in a televised interview as follows:

“The first question he [the pope] asked me was: ‘Do you bless divorced and remarried couples?’ which is one of the big questions today in the Church,” explained Duigou. He recalled responding, “I listen and I bless, and I also bless homosexual couples.”

The French priest responded: “Yes, absolutely. It is not about marrying them.”

In 2016, Bonny went on record calling for a blessing for homosexual couples, as well as for cohabitating or divorced and “remarried” couples.

He has continuously promoted the work of pro-LGBT activists such as Father James Martin, S.J., saying in public just in August that an event hosted by the pro-LGBT priest was “enriching.”