Belgium protest: Stop the extension of euthanasia to children

On Sunday, January 12, 2014, in the afternoon, organizers of groups that are working together to oppose the Belgian euthanasia law held a protest outside the offices of the Belgium euthanasia Control and Evaluation Commission.

The media reported on the event. Media Press News reported that: 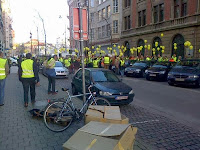 While Belgium is set to vote on the extension of the law on euthanasia to minors, a group wearing "Yellow Bibs" denounced the lack of control by the commission, they stated: "By the reckoning of the President of the Board of Control, many cases of euthanasia are illegal in Belgium and many doctors do not report to the board, the statements required by law ... In 6000 cases of euthanasia since 2002 no file has been forwarded to the courts, which is statistically amazing. "They also asked about the presence in the commission of sixteen members, four members of the ADMD (euthanasia group) who do not hide their activism: "We demand the immediate resignation of the members of the ADMD seen their conception of their mission control, which is inconsistent with the terms of the law."

The 300 people today in the streets of Brussels gave a red card to the supervisory committee. The goal is to revive the debate on euthanasia and alert the public on current abuses: "From next week a letter will go to all the presidents of political parties. We ask them to respond concretely to our proposals and we will disclose publicly. We ask them to take care of these issues as a priority and not to possibly extend the out of control law to children. We also ask them specifically if they "cover" the design is its ADMD mission within the supervisory committee." The group will not stop and is already planning other actions and events.

Some of the suggestions that the group made are:


a reduction of the quorum needed within the Control Commission to send a case to the prosecutor as well as "a renewal of the Board of Control immediate way" to ensure the "real pluralism."

The Belgian people are waking up to the atrocity and the abuses related to euthanasia.
Recently Marc Cosyns admitted he doesn't report the euthanasia deaths that he does. Sadly, this did not surprise people who oppose euthanasia. A study that was published in the (BMJ Oct 2010) concluded that euthanasia deaths are significantly under-reported in the Flemish region of Belgium with only 52.8% of assisted deaths in the Flemish region of Belgium reported, meaning that 47.2% of all assisted deaths were not reported.
In January 2013; it was reported that Belgian identical twins, Marc and Eddy Verbessem, were euthanized, with the approval of Wim Distelmans, the co-chair of the Belgian euthanasia Control and Evaluation Commission, because they feared becoming blind.

In February it was reported that a woman with Anorexia Nervosa was killed by euthanasia, after reporting that she had been sexually assaulted.
In February 2013, Dr Tom Mortier wrote about the euthanasia death of his depressed mother in April 2012. Mortier stated:


How is it possible that people can be euthanised in Belgium without close family or friends being contacted? Why does my country give medical doctors the exclusive power to decide over life and death? ... What are the criteria to decide what “unbearable suffering” is? Can we rely on such a judgement for a mentally ill person?

In September 2013, a person, who was not physically ill, was killed by euthanasia after a botched sex-change operation.
A study that was published in the (CMAJ June, 2010) found that 32% of all assisted deaths in the Flemish region of Belgium are done without explicit request.

It is clear that the Belgium euthanasia law has been incrementally extended through abuse.
Reprinted with permission from from from Alex Schadenberg