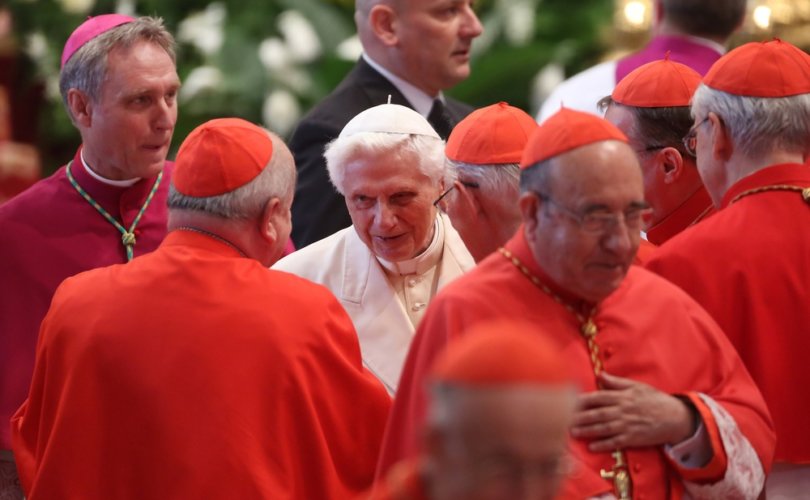 Benedict’s essay has broken the hierarchy’s seemingly impenetrable wall of silence regarding the major source of the Church’s sexual misconduct and cover-up problem.

For the record, he stated, “In various seminaries homosexual cliques were established, which acted more or less openly and significantly changed the climate in the seminaries.”

The pope emeritus cited a particularly egregious example of a bishop who showed pornographic films to seminarians, “with the intention of thus making them resistant to behavior contrary to the faith.”

During the entire week of the February summit, questions from both Catholic and secular media regarding the presence of homosexuality in the priesthood and in priestly formation were repeatedly deflected.

Cardinals Blase Cupich and Sean O’Malley, and Archbishop Charles Scicluna made it clear in daily press briefings that questions about homosexual relationships and acts with adults — especially seminarians — whether consensual or abusive, were off limits.

At one point, Cupich outright denied any causal connection between homosexuality or a homosexual subculture and sexual abuse.

Scicluna went further and said decades of widespread homosexuality in U.S. seminaries could not be addressed during the summit because it had “nothing to do with the sexual abuse of minors.”

A high-ranking official who spoke on condition of anonymity said at the time:

We have understood that you don’t want to talk about homosexuality, and the people of God have well understood why. If you say that you are in favor of transparency and clarity, your assembly should make a statement reasserting what is contained in the Catechism of the Catholic Church about the condition of homosexuality, and its condemnation of the grave sin of sodomy. In the absence of this, it’s clear that you do not want transparency and that you have lost all credibility on the part of the faithful.

The retired Pope’s essay is perhaps a step toward regaining the trust of Catholic men and women in the pews.

“Like the lay people they serve and lead, priests are shaped by the culture from which they emerge. They should be held, rightly, to a higher standard because of their calling. But priests and bishops have no miraculous immunity to the abnormality bubbling around them,” wrote Chaput.

The pope emeritus “locates the seed of the current crisis in the deliberate turn toward sexual anarchy that marked much of Europe in the 1960s, and the complete failure of Catholic moral theologians to counter it — a failure that more often resembled fellow-traveling,” continued Chaput. “The dirty little secret of the sexual revolution: Relaxing sexual norms does not reduce an appetite for violence, including sexual violence. It does exactly the opposite.”

Archbishop Chaput ended with a bombshell statement: The pope emeritus “seeks to explain the initially slow and inadequate Church response to the abuse problem,” yet “He remains silent on what many see as the continuing resistance of Rome to candidly name the core issue of the clergy abuse problem, which is not primarily a matter of clerical privilege but rather a pattern of predatory homosexuality.”