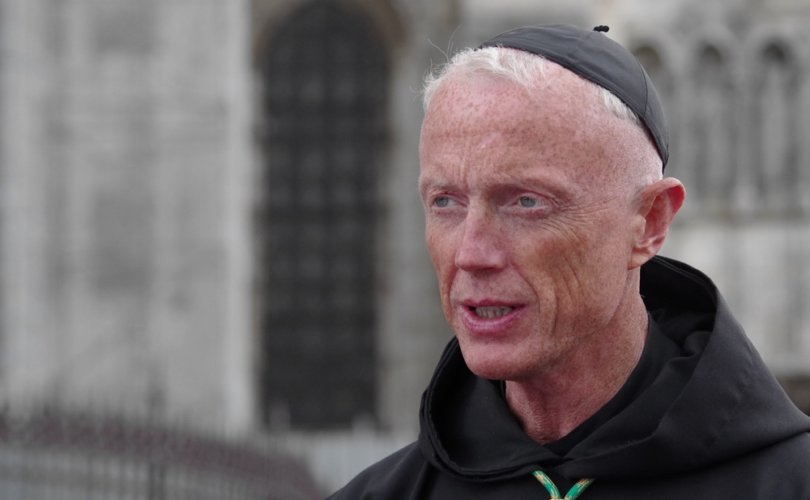 May 6, 2020 (LifeSiteNews) – In a homily on work and financial compensation on the occasion of the solemn Mass for the feast of Saint Joseph on May 1, the Father Abbot of the Abbey of Sainte-Madeleine du Barroux condemned the proposition to offer a “universal income” (read full homily below).

Such a proposition is increasingly being suggested by some political parties and international organizations because of the COVID-19 crisis in the wake of misery and job loss. Universal basic income, in the minds of its promoters, is not a temporary answer to a catastrophic situation but a permanent provision in view of a “new social contract.”

Who better than Dom Louis-Marie, a Benedictine monk whose rule of life establishes a true balance between prayer, work and rest, to say such a proposal is unnatural … and therefore contrary to the organization of society according to God’s will.

Dom Louis-Marie called the recourse to universal income the beginning of a “human and social apocalypse” — severe words that deserve a moment of reflection because that is where globalist organizations are heading.

On March 31, a United Nations report on lockdown because of COVID-19 and the ensuing crisis called for a “basic universal income” for all, not just those who will be affected by the crisis. Antonio Guterres, Secretary-General of the UN, has been promoting it for a long time, in particular as a way to mitigate job loss due to increased automation. The coronavirus offers an even more powerful excuse to implement a socialist plan that would make a large proportion of humanity dependent on the state.

The World Economic Forum also sees it as an answer to the crisis. On April 17, weforum.org published an article by Kanni Wignaraja, Assistant Secretary-General of the United Nations, and Balazs Horvath, Chief Economist of UNDP (UN development program) Asia-Pacific. They wrote:

Moving to such a system would need to ensure that the incentives to have a job remain intact. That is relatively simple to do: A UBI (universal basic income) should be sufficient to sustain a person at a modest minimum, leaving sufficient incentives to work, save, and invest.

Finally, good arguments can be made for having very selective conditions – for instance, some that relate to public goods, like vaccinating all children and ensuring they attend school. Such selective conditions would not undermine the main purpose of eliminating poverty and allow low-income people to take calculated risks, to try to lift themselves out of poverty.

The dangers of such a policy are clear. It would also be contrary to God’s provisions for a society that is organically arranged around the family and personal responsibility.

With the kind permission of the Father Abbot of the Barroux, a traditional Benedictine Abbey founded in Provence in the south of France in the 1970s, LifeSite offers below the transcription of his sermon. His text denounces in few words and with true vision an apparently generous project, which is, in reality, a poison.

The Holy Father recently confirmed the benefits of a “universal basic salary.” And some utopians have bounced back on the question, on this subject, raving about a “universal income,” which is not at all the same thing. Wages are the counterpart of work. An income is an annuity, a pension, an assistance, but without any counterpart. This project in view of a basic universal income would therefore consist of paying a sum of money to everyone, with no counterpart.

This would be good news for us because I believe that even monks and priests could have this income!

Ideally, it would be a good basic security, and it would allow every individual to receive a certain amount of autonomy from the State. And that would mean not to depend on a boss, or a husband, or even on work. It would be the dawn of greater freedom – that would be much less tiring!

But it would also constitute the first sparks of a human and social apocalypse, because it is almost against nature.

First of all, because work in itself, is not alienation. It is not work that makes the worker, the employee or the craftsman a slave. It is the conditions of this work, when they are too harsh: when it lasts too long, when it is not paid enough.

Work is in itself a vocation to collaborate with the work of the Creator. One can even say: to be a co-creator. Through work, man can acquire true independence, true freedom, and even freedom from the State. Through work, man cultivates himself, he develops, he is elevated through practical knowledge and through many other virtues, such as fortitude and patience.

The worker is elevated: he rises, but he remains anchored in reality, which always imposes its own conditions.

Through work, a father can provide for his family and, as many lay saints have done, help those in need.

And this is my real point. By a basic universal income, society would sink terribly into individualism. Everyone would have his or her own nest egg, a meager one, of course: the father, the mother, why not the children… Independence? No. Selfishness, yes.

Today Saint Joseph is celebrated as the bridegroom of the Virgin Mary, as I read in the liturgical books. Saint Joseph worked and earned money. And so he provided for the needs of the Holy Family. Mary did not have a gainful occupation, yet she did much more for the salvation of souls and the world than saint Joseph did. The Holy Family is not defined by the independence of individuals but by an alliance of persons. Each member has his or her best place.

In a monastic community, we live out a little bit of this mystery of the covenant. Some work at gainful employment: the bakery, the oil mill, the cultivation of vines and olives, the bookstore and especially, at the moment, the online shop, which is a bit overwhelmed with work in this time of confinement.

There is also the hostelry, which brings in a bit of remuneration. Others work at service jobs that don’t pay: the kitchen, the infirmary, the cellarer – you work a little bit! – the laundry, the linen room… Looking after the linen is tiring, isn’t it? The plumbing, the electricity… Others devote themselves a little more to study and spiritual and theological training, and others still, to art.

So we are a family, and everyone is a member of that family in the sense that he participates in the upkeep of the community. The Catechism says that no Christian, because he belongs to a community of solidarity and brotherhood, should feel entitled not to work and live at the expense of others.

May Saint Joseph give us the grace to resist the temptation of the parasite!

But we will be a true family if we live out this work in a spirit of alliance, like Saint Joseph and the Virgin Mary: without rivalry, but in a spirit of service.

And what we will try to live better in work, we will apply to prayer, which is an exercise, and which is a labor. Prayer for the Church, and prayer for souls, for all souls …