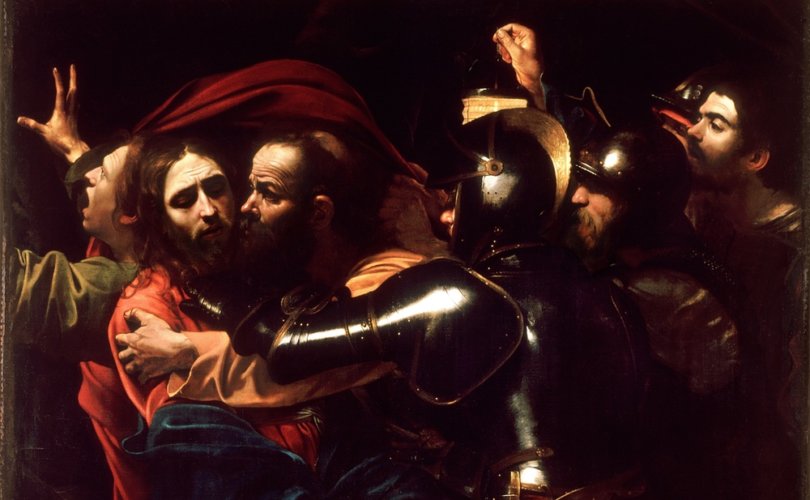 Judas kisses Christ in Caravaggio's The Taking of Christ

It almost sounds like Jesus giving Judas a command to betray Him: “Do it quickly.” Or as if there were a hint of fear in His voice…

The Lord knows that His hour has come. He is eager to embrace it, to drink the cup of suffering, to accomplish the long awaited redemption of mankind. He has the eagerness of a bridegroom before the wedding feast, longing for the consummation of His love and the fruitfulness of the union. He sees before him generations of righteous men and women born in His heart, raised from His blood. He sees with full clarity the unspeakable pain of soul and body that He must undergo, and already tastes it. “Do it quickly”: do not delay the supreme sacrifice that unites heaven and earth. “Do it quickly”: I am ready to enter my Passion and can brook no delay.

Shortly after this saying of the Lord, St. John adds the haunting words: “And it was night” (Jn. 13:30). Night fell on the light of the world. The clouds of malice and scorn surrounded the Sun of Justice and hid Him from view. We are plunged into utter darkness — the darkness of a world from which God has hidden His face, a world consigned to the outer darkness as long as it does not know its Savior and freely bow before its King. “And it was night,” not only because of the impending doom of the betrayal, scourging, and crucifixion, but even more because of the fallen state of mankind, “the people sitting in darkness and in the shadow of death” (cf. Mt. 4:16).

Each year, we read or hear the Passion differently. God is ever the same, but His word is infinite, and we are always changing, so His words cannot but strike us in different ways as we grow older in the flesh (but, we hope, younger in faith and hope). This year, I hear with an almost deafening clarity: “As soon as Judas took the bread, Satan entered into him. So Jesus told him, ‘What you are about to do, do quickly.’”

Today they may be wearing papal white, princely red, or clerical black, but they are no less culpable for that outward sign of holiness. Quite the contrary: The higher the station, the more sinful the deviation. For us, too, it is night, and the Son of Man is betrayed into the hands of sinners — metaphorically, by false teaching and evil example, and literally, whenever Our Savior in the Holy Eucharist is placed into the hands of unrepentant mortal sinners, to be crucified anew. The words of St. John Vianney on this subject should be enough to prompt a serious examination of conscience and sincere recourse to the Sacrament of Penance!

“As soon as Judas took the bread…” The following text from St. Thomas Aquinas is especially suitable in our times:

The sin of the fornicator receiving Christ’s body is likened to Judas kissing Christ, as to the resemblance of the sin, because each outrages Christ with the sign of friendship… And this resemblance in crime applies no less to other sinners than to fornicators: because by other mortal sins, sinners act against the charity of Christ, of which this sacrament is the sign, and all the more according as their sins are graver. But the sin of fornication to some extent makes one more unfit for receiving this sacrament [than other sins], because thereby especially the spirit becomes enslaved by the flesh, which is a hindrance to the fervor of love required for this sacrament. (Summa theologiae, III, qu. 80, art. 5, ad 2)

This observation of Aquinas goes a long way toward explaining why many Catholics today derive no benefit from receiving the Eucharist, but rather heap up punishment for themselves until they repent. If they are guilty of sins like premarital sex, contracepting, adultery, or homosexual acts, they cannot have charity in their souls, and in this way, they “outrage Christ with the sign [but not the reality] of friendship.” They are imitating Judas by giving the Lord a false kiss.

“And it was night.” We are indeed immersed in an ecclesial night that stretches on wearisomely, for year after year, decade after decade. We might have forgotten what the day looks like; we might wonder if the dawn will ever come; we could be deceived by the Evil One into believing that night has won and the day has been vanquished. This is what the disciples believed in their weakness, when they were scattered and went into hiding. Our Lord let them remain in darkness for a time, to make it absolutely clear that without Him, all is night and will remain night. He rose again on the third day to show where the only light of the world will ever come from. “Salvation is found in no one else, for there is no other name under heaven given to mankind by which we must be saved” (Acts 4:12).

Nothing will change this everlasting truth. Even the Judases in our midst will succeed only in bringing about, again and again, a repetition of the Gospel triumph until the end of time.