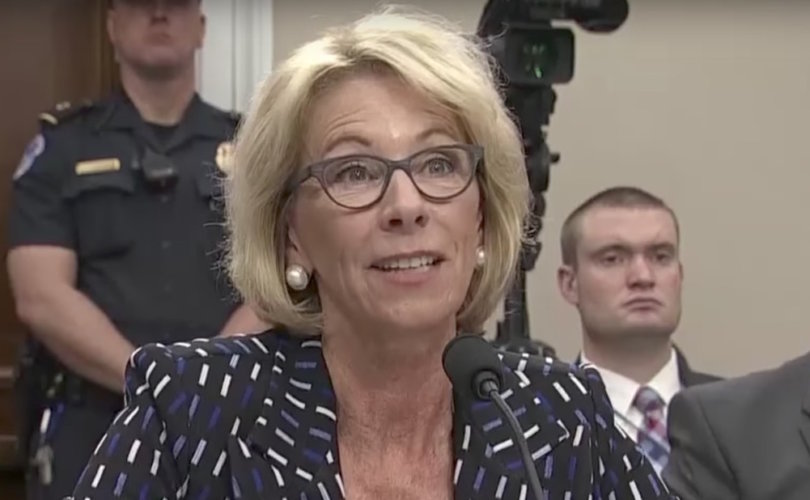 WASHINGTON, D.C., May 29, 2017 (LifeSiteNews) – A U.S. congressional hearing last week provided a stark lesson on how “LGBT anti-discrimination” laws are used to crush freedom of people to live according to their faith-informed conscience.

Trump's education secretary, Betsy DeVos, was testifying at a House Appropriations Subcommittee hearing on the topic of school choice and vouchers – federal grants provided to the states to be dispersed in a way that allows parents to choose the best school for their children, regardless of whether it is public or private, religious or secular.

Championing school choice, especially for disadvantaged poor children shackled to failing public schools, is DeVos’ calling in life and the reason Donald Trump picked her to run the Education Department. By appointing her, Trump defied the hysterical complaints of “educrat” elites and the radically pro-LGBT teachers’ unions, who view DeVos as an urgent threat to their agenda and their monopoly on education policy.

At the hearing, DeVos was set up with hostile questioning from Democratic Rep. Katherine Clark, D-Mass. The following exchange between them ensued, as reported by the Trump-hating Huffington Post:

During a testy exchange in a House Appropriations subcommittee hearing, Rep. Katherine Clark (D-Mass.) told DeVos about Lighthouse Christian Academy, a private school in Indiana that receives state voucher money but denies admission to students from families where there is “homosexual or bisexual activity” or someone “practicing alternate gender identity.” Clark asked DeVos, whose budget seeks a $250 million increase for projects that include vouchers for private schools, if she would step in if that Indiana school applied for such federal funding.

DeVos replied by saying she supports giving flexibility to states.

“For states who have programs that allow for parents to make choices, they set up the rules around that,” she said.

Clark, who appeared baffled, pressed DeVos on whether she could see any situation in which she would overrule a school requesting federal voucher money ― if the school discriminated against students based on sexual orientation, race or special needs, for example.

“The Office of Civil Rights and our Title IX protections are broadly applicable across the board,” DeVos said. “But when it comes to parents making choices on behalf of their students….”

“This isn’t about parents making choices. This is about use of federal dollars,” Clark interrupted. “You would put the state flexibility over our students?”

“I think a hypothetical―” DeVos said.

“It’s not a hypothetical,” Clark snapped. “It’s a real school.”

As they talked over each other, the chairman stepped in and gave DeVos a chance to fully answer Clark, whose time was up.

Clark managed to get in a parting comment: “I am shocked that you cannot come up with one example of discrimination that you would stand up for students.”

By NOT taking Rep. Clark’s bait—say, by attempting to defend both school vouchers and federal “LGBT nondiscrimination”—DeVos made an important stand for genuine liberty in the face of escalating leftist, tyrannical groupthink. Perhaps unwittingly, she faced down a “homo-supremacist” ideology that posits newfangled, man-made “LGBT rights” as inviolable even if that means eviscerating the First Amendment by using state power to force religious schools to violate their biblical charters.

This took courage and discipline on DeVos’ part, as she is reportedly very pro-LGBT—so much so that during her confirmation process, the “gay” group from her home state, Michigan Equality, telegraphed to national LGBTQ groups that DeVos was their pal, not their enemy. (Groups like the Human Rights Campaign still savaged her.)

LifeSiteNews has been almost alone among conservative groups and websites in reporting the extent of DeVos’ past pro-homosexual and pro-transgender record, which, by the way, was influenced by her and her husband Dick DeVos’ employment of a Republican homosexual activist, Greg McNeilly, as family spokesman and longtime aide.

Despite all that, in the crucible of a Capitol Hill hearing, DeVos stood her ground and defended letting states control how their (and your taxpayer) education dollars are spent, as opposed to going along with the top-down federal approach favored by the Left.

DeVos’ testimony could not be further from what transpired during the Obama years, during which Attorney General Eric Holder was the federal pro-LGBT enforcer coming down hard on conservative school districts that dare not toe the pro-“gay” and pro-“trans” line.

In 2011, under the rubric of fighting “bullying,” then-Attorney General Holder worked with the left-wing Southern Poverty Law Center to sue a Minneapolis school district into abandoning its conservative approach to LGBT issues (which was essentially not to promote them). Call it political bullying.

Remember when liberal secularists screamed against the Moral Majority and the “Religious Right”: “How dare you impose your morality on us!”? Well, today’s LGBQ (Q stands for “Queer”) leftists have no problem imposing their immorality and sex-gender anarchy on everyone.

Homosexual and “transgender” activists and their allies like Holder and Obama crave the power to force an Indiana Christian school to defy God by compromising on sexual sin. All in the name of “equality.”

Here are excerpts from the “Biblical Lifestyle” belief statement of the Lighthouse Christian Academy, based in Bloomington, Indiana, that so angered Massachusetts Democrat Clark:

The Bible prohibits specific behaviors and limits marriage to a covenant relationship between a man and a woman (Genesis 2:21-25; Ephesians 5:22-33).  LCA will instruct students in these teachings.  Behaviors prohibited in the Bible include, but are not limited to:

How refreshing. America needs more schools like the Lighthouse Christian Academy. And by the way, the same statement also covers other sins like drunkenness, profanity, deceit and viewing pornography.

Imagine if Hillary had not lost the election, and instead of DeVos testifying against Big Government control of schools, we were facing renewed and emboldened LGBTQ activism through all federal bureaucracies. The federal “Equality Act”—more accurately called the “Criminalizing Christianity Act”—would be a top priority for “President Hillary Rodham Clinton.” (The bill already has 241 co-sponsors, almost all Democrats.)

Under that scenario, Lighthouse Christian Academy with its old-fashioned biblical morality becomes a target, just like that Minnesota school district targeted by Holder and the SPLC. There are a lot of tools at the Left’s disposal to pressure and threaten faith-based educational institutions: government student loan programs, vouchers, federal (and state and local) “non-discrimination” policies, and pro-LGBT accrediting committees and teacher-training courses, to name a few.

The war over liberty in America is real, and leftist, sex-and-gender ideologues are in the vanguard of trying to extinguish Americans’ right to live by their faith and moral creed—all to assuage the feelings of the sex- and gender-confused.  We need to reframe the debate to cast pro-LGBT liberals as the true discriminators who arrogantly declare their secular-egalitarian “morality” superior to God’s Truth as revealed in Scripture.

It’s not equal. Even nature itself discriminates against homosexuality.

And don’t fall for that old liberal “civil rights” trick equating unchangeable race with changeable sexual and gender behaviors. It was the late Christian preacher and ex-NFL linebacker Ken “Hutch” Hutcherson, a black man, who wisely said, “Don’t compare your sin to my skin.”

LGBT laws and policies inherently discriminate against people of faith. Why? Bottom line: inalienable, constitutional rights rooted in God and truth are incompatible with man-made “rights’ rooted in sin and sexual perversion. Think about it: If the pro-LGBT Left really cared about “diversity, inclusion and rights,” why are they engaged in cultural-political jihad against the EX-“gay” movement?

One lesbian activist attorney, Chai Feldblum, declared the battle between “gay rights” and religious liberty a “zero-sum game,” in which the LGBT lobby is winning in the courts. “Gays win, Christians lose,” said Feldblum, who was appointed by Obama to sit on the EEOC, the Equal Employment Opportunity Commission, where she could advance her pro-homosexual version of “morality.”

But at least Feldblum recognized that religious opposition to homosexuality was sincere. Many liberals and LGBT activists today do not. They callously smear Christians—even African Americans like Hutch—who won’t bow to their agenda by smugly comparing them to racists of a bygone era who defended Jim Crow laws.

The battering ram of homosexual “marriage”

The Supreme Court’s Obama- and media-assisted imposition of same-sex “marriage”—which is to real marriage what Bruce (“Caitlyn”) Jenner is to real women—has LGBTQ militants believing their own “equality” propaganda, which turns “civil rights” on its head.

Counterfeit “marriage” in the hands of LGBT legal strategists is just another tool to beat Christians and faith-based schools into submission. Look at how the pro-homosexual ACLU is working to force Catholic schools to accept employees who flout Church teachings by getting “married” to a member of their same sex. I hope Betsy DeVos and her boss truly understand that.

LGBT activists claim to respect Christians, but when you are doing everything in your power to demonize them as “haters” and make it illegal for them to act on their moral beliefs—even suing religious schools, which guide children into truth—their protestations are meaningless.

“The struggle for queer rights will one day be a struggle between freedom of religion versus sexual orientation,” said Canadian lesbian lawyer Barbara Finlay.

Substitute “behavior” for “orientation,” and Finlay had it right. Sin demands submission, and is in total war against the good. After her Capitol Hill testimony, the self-serving “gay” lobby began blasting Betsy DeVos as being “OK with LGBTQ discrimination.” The reality (I hope) is that she and her boss, Donald Trump, are merely “OK with freedom,” including the unrestricted freedom to stand for God’s truth even when it is politically incorrect.

The LGBT Lobby is very good at politics, but politics has its limits. Let’s pray and work hard to persuade Trump and his team to reverse the LGBT Lobby’s destructive agenda of trying to use the power of government to do what they cannot do: alter God’s transcendent truth.

DeVos is not as conservative on social issues as you think