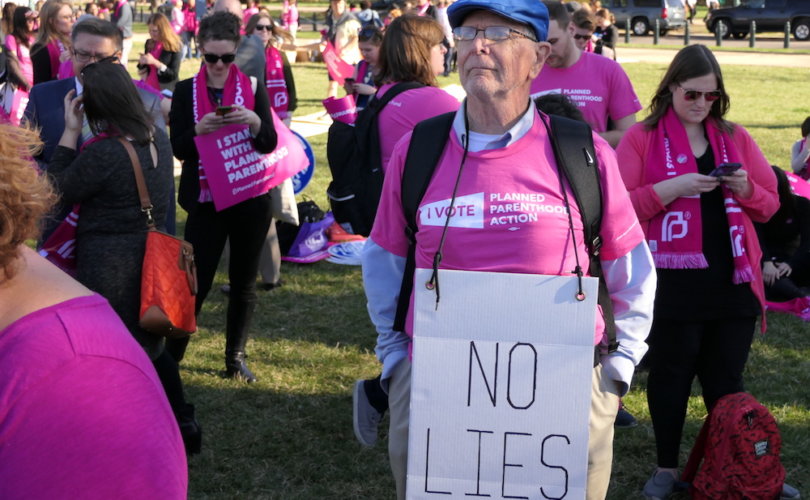 June 26, 2017 (LifeSiteNews) – Abortion activists are trying to “educate” pro-lifers about what Planned Parenthood “really” does, but in the process are showing that they're the ones who need educating.

Three ad agency employees launched defundpppetition.com, which asks users to sign a petition defunding Planned Parenthood. Users are to select the “services you would like to defund.”

“But it's actually a bait,” explains Business Insider. “The website is designed to educate people about Planned Parenthood’s various offerings.”

Clicking on “defund abortion” results in a red message: “NO government funding has gone towards abortions since 1976 so you can’t defund them.”

Sure, the federal money Planned Parenthood receives can't technically fund most abortions. But it can keep the lights on. And help with overhead costs. And pay staff who do abortions. And pay for lots of other things that keep the abortion business afloat.

Giving Planned Parenthood money that's “not for abortions” is like giving a heroin addict money for groceries – so he can spend his other grocery money on drugs.

The petition allows users to advocate “defunding” a number of services…many of which aren't even offered at Planned Parenthood.

A Live Action investigation showed what Planned Parenthood is really about when its workers explained they don't do prenatal care because they “specialize in abortions.”

“I thought you helped with adoptions,” a Live Action investigator asked Planned Parenthood in another part of its “Abortion Corporation” exposé.

“No, we do abortions,” the Flagstaff, Arizona Planned Parenthood employee answered.

“We only offer, um, like pregnancy tests and then abortion care, if that’s what you wanted to go with,” a Brooklyn Park, Minnesota employee said.

Here's the “healthy relationship advice” Planned Parenthood can offer: whips, clamps, and rope burns during sex are “normal” even if you're a minor. “Pooping” on a partner can be “really fun.”

Planned Parenthood doesn't give “help on ending abusive relationships” – but it does give help on continuing them. The company aides and abets child sex traffickers and helps cover up the sex abuse of minors.

All of the other “services” that the “petition” says Planned Parenthood allegedly provides can easily be gotten at Federally Qualified Community Health Centers or the office of a doctor who doesn't chop up children for a living. Or CVS, in the case of the “flu vaccine” and “condoms” that will apparently be “defunded.”

And, for the record, Planned Parenthood's condoms consistently get the worst customer ratings.

Here is a real petition to defund Planned Parenthood.