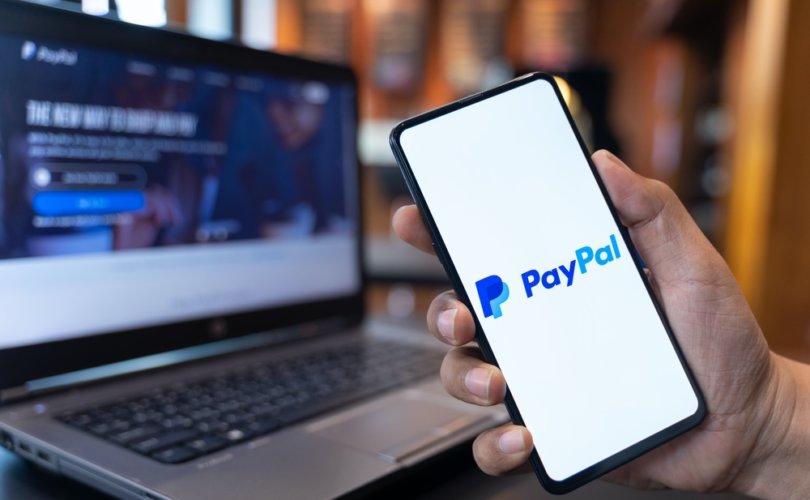 (LifeSiteNews) – Big Tech will take your money from you if you don’t pass the Silicon Valley Inquisition, so make sure you only hold “acceptable views” when you use their funding and transactional platforms.

As was published at LifeSiteNews in October, PayPal can fine you $2,500 USD for promoting “intolerance” with their service.

It is a bit strange, to say the least, that PayPal – which operates essentially as a digital wallet or bank proxy – can fine you for being naughty with how you spend or transfer your money.

I understand that there are legal questions and restrictions, like not using a service to pay for a hitman or buy and sell narcotics, but “intolerance” is an ill-defined and loaded term.

When I do freelance writing for other outlets, it is not uncommon to get paid via PayPal, and considering that I write from a Catholic-conservative perspective … I wonder how long it will be before I get fined for “intolerance.”

It isn’t just PayPal that will go after your wallet if you go after any sacred cultural cows.

In 2018, the massive creator-revenue service Patreon cancelled a number of conservative and alternative voices, which caused a bit of backlash against the company, but nothing that would break the bank.

They have taken their adherence to woke-orthodoxy even further as of late and have now added the ability for users who have been disciplined to renounce their bad ways and turn over a new politically correct leaf with the company.

As was written at Spiked-Online: “The guidelines empower Patreon to cancel users’ accounts – and thus their income – for a multitude of heresies. But if users ‘renounce’ their heretical beliefs to the high priests of Patreon’s ‘Trust and Safety’ team, they may have their accounts and livelihoods restored. Patreon even generously promises to ‘educate’ creators who hold what it deems to be problematic views.”

In our largely irreligious world, it seems that you can confess your sins to a priest-proxy at Patreon and then be allowed out of big-tech purgatory in order to make a living with acceptable ideas.

Granted, there are detestable ideologies out there, and I am not suggesting that an organization ought to accept all thew world’s filthiness just to prove a point. However, without even doing an internet search, I would imagine that a host of morally evil endeavors are funded at Patreon but are allowed to stick just because they are left wing.

GoFund yourself somewhere else

We all remember the debacle with GoFundMe and the Freedom Convoy in February when the crowd-funding giant cut off the money to the Canadian freedom fighters.

After the international press and the massive amount of donations, the fundraiser was cancelled by GoFundMe, largely due to squawking from leftist politicians and because of dubious legal technicalities.

Now, if GoFundMe had a policy of never hosting fundraisers for events that were undesirable by political authorities or events that had the potential for violence, that would be one thing.

But as it stands, you can currently donate to the fiery but mostly peaceful Black Lives Matter organization, which is hardly a peaceful organization and has been at the root of massive civil unrest and immeasurable damage to civic property.

Lest you think you can simply skip over to a pro-freedom outlet such as GiveSendGo, think again. The Canadian feds stepped in quickly to block any release of the GiveSendGo funds.

Legendary Catholic author G.K. Chesterton was a sharp political critic in his day, writing at the advent of the totalitarian philosophies that enwrapped much of the world beginning in the late 1910s onward.

For Chesterton, Big Business and Big Government were two sides of the same coin. He called them Mr. Hudge and Mr. Gudge.

The marriage between Hudge and Gudge was a match made in hell, and at the root of so much societal disorder.

Well, whoever Gudge is and whoever Hudge is in the saga of the continual squeezing out of non-leftist voices by Big Tech and Big Government, it is clear that Chesterton’s pet peeve has never gone away.