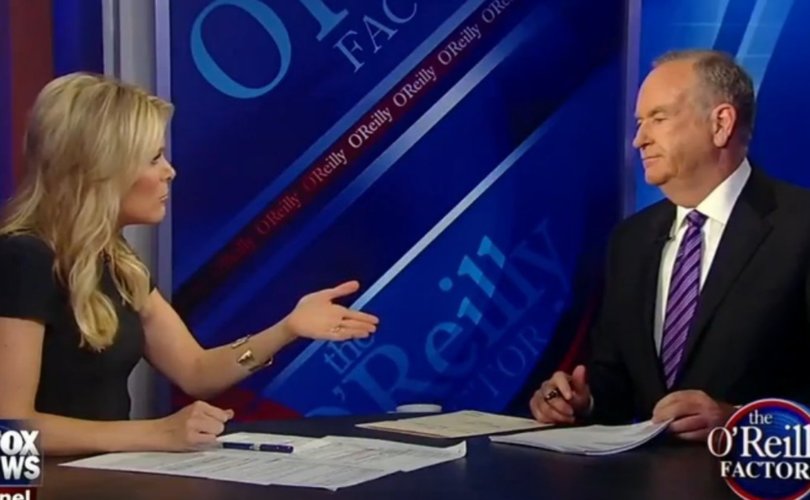 April 28, 2017 (LifeSiteNews) – The dismissal of Bill O’Reilly from Fox News over allegations of sexual harassment doesn’t look good, especially coming as it does on the heels of the similarly dishonorable departure of former Fox CEO Roger Ailes.

Could O’Reilly be the innocent victim of an ideological witch hunt? Did his head fall under the guillotine merely to further plans to transform Fox into another globalist, left-leaning CNN, as some have suggested? Perhaps. But somehow that theory seems too convenient. If there is any such liberal conspiracy (and maybe there is), it’s more likely that its leaders are merely exploiting a pre-existing vulnerability at Fox.

Whether O’Reilly himself is guilty or not, the only thing surprising about the revelation that some of the male leadership at Fox may have sexually harassed female employees, is that so many people are surprised by it. In the past few days, discomfiting montages of male personalities at Fox making denigrating sexual remarks towards their female co-workers on the air have been making the rounds. And it sure didn’t help that days after O’Reilly’s departure Fox host Jesse Watters appeared to make a sexually explicit joke at the expense of Ivanka Trump.

Meanwhile, Fox has long earned itself a reputation for flaunting, beyond the bounds of decency, the physical features of its female staff. The network arguably pioneered – at the very least, enthusiastically embraced –  the sleeveless cocktail dress uniform that has become the norm for female TV anchors. As Diane Dimond, a former female reporter at Fox, alleged: “There is a good ol’ boys’ network thing there at Fox … It’s a boys’ shop. You do not complain. You’ve got to wear your skirts short and your heels high, and you’ve got to put lots of makeup on if you’re a woman.”

This isn’t a secret, or even controversial. There’s a reason that Youtube montages of Fox News women’s legs are a thing, or why country music singer Austin Cunningham recorded his satirical tribute to “The Girls on Fox News.” Over at TownHall, former Fox contributor Linda Chavez adds to the evidence, describing how, “The emphasis on glamor and a certain look at [Fox News] grew obsessively over time. And the standard applied exclusively to female on-air personalities.”

The sleazification of the media is something that affects both left and right. Ultimately it stems from the overall pornification of the culture. But while conservatives ought to be able to expect higher standards from their own media, at times it feels like what we get is the exact opposite – a conscious “frat boy” mentality disguised, or at least excused, as a form of conservative, blue collar populism. And Fox News certainly isn’t the only, or even the worst, offender.

A few years ago, an attempt was made to launch a conservative cable TV news network in Canada. So closely did the ill-fated Sun News Network hew to the Fox News model that it quickly earned itself the nickname (certainly not intended as a compliment) of “Fox News North.”

And while many of those involved in the project were well-intentioned conservatives who did excellent work, during its brief existence it also earned other, even less complimentary epithets. Luiza Savage, the Washington D.C. bureau chief of one of Canada’s top magazines, dubbed the station “Skank TV” on Twitter. While Savage quickly retracted the offending tweet, she wasn’t alone. One columnist at Canada’s conservative-leaning National Post newspaper said she wouldn’t watch the station, because as far as she could tell, “Sun TV really isn’t about Hard News and Straight Talk. It’s about Hot Chicks and Sexy Outfits.”

“For its women presenters, there seems to be a ban on sleeves,” wrote Tasha Kheiriddin. “Not a jacket in sight. Only cocktail dresses, as clingy and low-cut as possible.”

This is an almost impossible topic to discuss these days, since even commonsense observations that what a woman is wearing may be inappropriate is quickly seized upon as “slut-shaming.” But surely I wasn’t the only one to notice, for instance, that the most conspicuous thing about the recent appearance by The Blaze’s Tomi Lahren on The View – other than the incoherence of her position on abortion – was how provocatively dressed the heretofore “conservative” Internet star was, and how sensibly dressed the show's panel of liberal hostesses were. And who can forget Megyn Kelly’s shamelessly provocative GQ photo shoot?

Then there’s the widely-read Daily Caller, Tucker Carlson’s online conservative newspaper, conceived as a right-wing answer to Politico. There, alongside conservative red meat news articles promoting gun rights and critiquing Obama’s policies, one can find suggested articles like “Celebrate National Lingerie Day With The Victoria’s Secret Angels,” the equally subtle, “This Model Didn’t Get Millions Of Fans Because She Covers Up,” and the breathtakingly offensive, “13 Syrian Refugees We’d Take Immediately [PHOTOS].”

In an interview with Politico, Carlson, most recently making waves as a rising star at Fox News (where, to his credit he recently grilled a thoroughly uncomfortable Planned Parenthood executive), desperately attempted to put the proverbial lipstick on the pig. The borderline NSFW (Not Safe for Work) slideshows at The Daily Caller, he claimed, are about “celebrating pulchritude in a way that’s edifying and uplifting.” He added (much more convincingly), “We care about traffic.”

Then there’s The UK’s Daily Mail, one of that country’s few conservative-leaning newspapers, and also a den of iniquity. The “right rail” (as web designers call the right column where publishers typically put related stories and the like) of The Mail’s site is infamously packed with all manner of salacious gossip and pornographic sleaze.

Meanwhile, one of the stranger aspects of the “fake news” phenomenon is how many of the fake sites that were widely shared by a pro-Trump constituency were plastered with grossly offensive advertisements that seemed to bother those sharing the articles not a bit. Many of the leading conservative blogs display the same conspicuous lack of taste and decency.

So what exactly is going on here? That’s hard to say, really. One theory floated by The Hill is that because conservative media outlets are the new kids on the block, they’ve been forced broadly to embrace sensationalism as a way to attract eyeballs from the old school juggernauts like the New York Times. While The Hill wasn’t referring specifically to the salacious side of sensationalism, the theory fits. And up to a point, it makes sense. Eyeballs equals advertising contracts equals money, and without money the new brand of independent, conservative media outlets couldn’t even exist. Hence Carlson’s point that The Daily Caller “cares about traffic.”

But the theory also doesn’t comfort. For ultimately what good is a conservative media that is willing to sell out central conservative moral convictions for the sake of financial gain? That has always been the jarring contradiction when visiting sites like The Daily Caller or The Daily Mail. One might be reading an article convincingly defending the “sanctity of marriage” or lambasting liberal values or critiquing Planned Parenthood, and all the while be trying to avert one’s eyes from the flagrantly pornographic content on the side bar.

My fear, I suppose, is that the problem reflects a more fundamental crisis in American conservatism: a general slide away from key moral issues in favor of a purely political ideology built upon the eviscerated framework of authentic conservatism, often defined more in terms of what it is against, then what it is for. This, it seems, is what we find in the rise and increasing influence of the “alt right” movement: a movement that lionizes those who employ extreme crudity, so long as it is employed in merciless attacks on the politically correct left.

One might hesitantly point out here that conservative America’s current hero of choice is a man who made much of his fame in the seedy world of beauty pageants, and whose own recorded remarks about women surpass even the more egregious examples in the Fox News montages mentioned above. Granted, many of Trump's conservative supporters, particularly evangelicals, have expressed disgust at his past treatment of women. Others, however, particularly those formed in the model of the alt-right, were uncomfortably quick to dismiss those concerns, or seemed not to care at all, so long as political gains were made.

The crisis at Fox News provides an opportunity for some meaningful existential self-analysis about the nature and state of conservatism, and what we expect from our media. Let's not waste it.