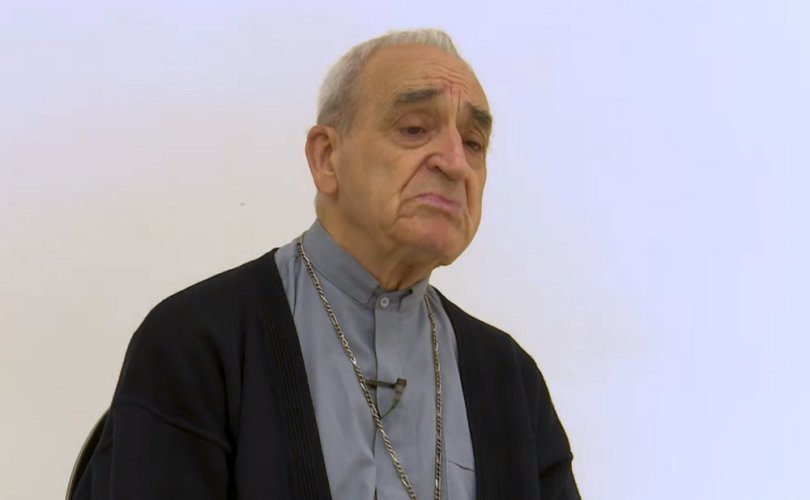 October 21, 2019 (LifeSiteNews) – Bishop José Luis Azcona, emeritus of Marajó in the Amazon Delta in Brazil, has reacted to the ongoing controversy about the carved nude figures of pregnant indigenous women that are appearing repeatedly at the Amazon Synod and at events organized by the “Amazonia Common House” (“Casa comúm”) by the progressive pan-Amazonian network REPAM.

He called the syncretist liturgies a “point of scandal for the whole Church.” These liturgies were organized in the Vatican gardens before the opening of the Synod and in recent days in Santa Maria in Traspontina, a 17th century church on Via della Conciliazione leading to Saint Peter’s Basilica.

The bishop also spoke of “evil spirits” that could be invoked on these occasions.

To date, no explanations have come from the Vatican about the nature of the statuettes, which some have connected with the Virgin Mary and St. Elizabeth. Others, including an indigenous chief, identified them as pagan symbols. At any rate, they received an idolatrous cult that included a ritual prostration surrounding them and other objects “offered” on a cloth on the ground.

The first such ceremony took place before the eyes of Pope Francis in the gardens of the Vatican; one other at least was filmed in Santa Maria, prostration included, in front of the main altar and most probably in presence of the Blessed Sacrament.

News broke today of several replicas of the controversial carved “pachamama” statue being taken from Santa Maria in Traspontina Church near St. Peter’s Basilica in Rome and thrown into the Tiber River.

Pressed with questions about the statuettes by Diane Montagna of LifeSiteNews, the head of the Vatican’s Press Office, Paolo Ruffini, warned against “looking for pagan symbols” and “seeing evil where there is none.” Fr. Giacomo Costa, SJ, secretary for the Synod information commission, laughed off the matter, insisting that the figure should not be seen as “either pagan or sacred.” But neither of the men was able to give a precise explanation.

Bishop Azcona, on the other hand, wrote to ACI Digital, the Portuguese language section of ACI Prensa (which includes Catholic News Agency), to voice grave concerns about the process.

Concerning the “Amazonia Common House” initiative, referred to as a “Tent” by REPAM and other participants who claim responsibility for 300 events in Rome during the Synod, Bishop Azcona wrote that it “can be a point of scandal for the whole Church, coming from Rome on the occasion of the synod.”

“Regarding the ‘Tent,’ a number of relevant questions are legitimate and justified. For example, in these village rituals, which logically must be varied, what kind of spirits will be invoked? Because these must be varied, they may belong to the spirits of sorcery that are incompatible with the gospel and on the same level as the sin of idolatry, according to Paul,” he warned.

Bishop Azcona added, “Or are they spirits invoked in the ‘Amazonian Common House’ itself, through its mysticism, rituals, prayers, smoking that belong to the field of magic as seen by the same apostle again, in the light of the worst possible evil? Or are they bizarre ‘authorities,’ and ‘powers,’ (‘evil spirits’ for Paul), subject to the control of the prince of evil, Satan?”

“Or do those who raise the ‘Tent’ perhaps not truly believe that Christ has defeated all these forces by His redemptive work and that He, exalted over them all, forever and utterly maintains His sovereignty as Lord?” he asked.

In pagan ceremonies such as the “Pago a la Tierra” – which closely resembles the event held in the Vatican gardens identified by a shaman’s grandson as a pagan ritual – sacrificing to spirits is the point of the whole thing. They involve giving back to “Mother Earth” some of what is taken from “her” in order to appease her if too much has been taken, in which case “she” would no longer nurture but destroy through earthquakes and illness.

This is in fact the climate narrative that’s going every bit as strong at the Amazon synod as suggestions concerning the ordination of married men, an ordained ministry for women – as deacons, but if Bishop Erwin Kraütler has his way, as priests – and the “amazonification” of the Catholic liturgy for the indigenous.

The rhetoric keeps popping up: It is necessary to do away with the “capitalist” (and in fact Western) way of life to stop taking too much of the earth’s resources because otherwise doomsday awaits us. In other words, Mother Nature will punish us.

According to ACI Digital, the “Amazon Casa Comúm” community in Santa Maria in Traspontina responded to a question about whether the ritual they celebrated was a Christian or an Amazonian one, the answer was plain: “The two are the same thing.” Another comment was that the rituals in Rome aim to show “Amazonian spirituality.”

Here is where syncretism comes in. What is taking place in Rome is not the mere presentation of shamanic or pagan rituals showing what Amazonian culture is like: It is instead a deliberate mixture of the pagan and the Christian in a way that is incompatible with the Catholic faith and “law of prayer,” if only because it is centered on the earth, not on God, and involves bowing down to pagan symbols in order to proclaim earth’s “rights” over and above mankind’s.