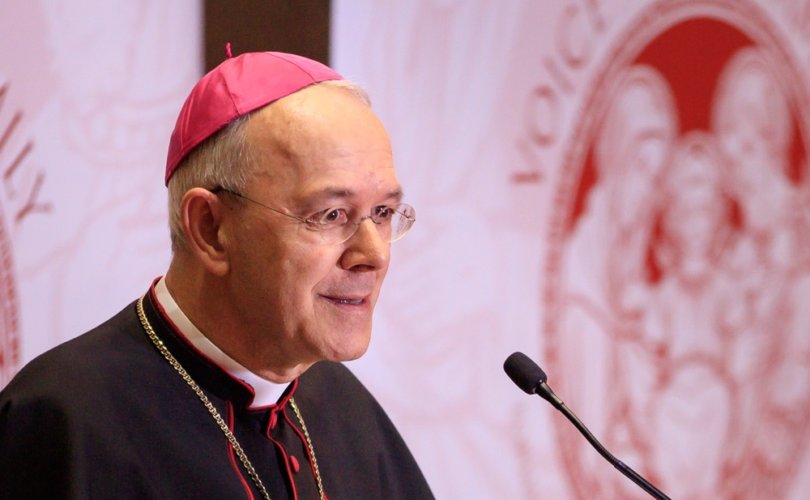 September 28, 2020 (LifeSiteNews) – In a new interview, Bishop Athanasius Schneider discusses the response to the coronavirus and sees in the global response to it “signs of a world government.” He also points to the plans of Freemasonic groups which work for “equality, liberty, and fraternity,” adding that with the wearing of the face masks, “we now all look alike in the whole world.”

Speaking on September 20 with Gloria.tv’s Eva Doppelbauer, Bishop Schneider covered several important topics, among them the consequences of the interreligious meetings in Assisi under Pope John Paul II, Schneider’s own experiences in the Soviet Union in comparison with today, and the current Protestantization and adaptation of the Catholic faith to the world.

However, the prelate went on to say, there do exist “firm hints that it goes into the direction of a world government.” For example, the words of a prominent personality who said five years ago that an epidemic would be needed in order to establish a new world government. This is significant, since this was said by “some influential people,” Schneider added.

As another hint, one could look at how “the whole world now is being treated and reprimanded, in a unified manner, like little children – up to the smallest details on how to dress, that is, with the face mask, how one may move about, how much distance to keep, on the entire globe, and in a unified manner!”

“In front of our very own eyes,” Bishop Schneider stated, “there is developing a scenario which has clear traits of a world government.” And “these are clear hints that one cannot deny,” he concluded. Otherwise, “we would just bury our heads in the sand.”

Here, Bishop Schneider recalled that Freemasonry in general has always worked so that “the entire mankind becomes unified, with the help of the three slogans – fraternité, liberté, égalité, that is: fraternity, liberty, and equality.” And this is to be “global,” not only limited to France. When further looking at the goal of all men being equal, the Kazakh prelate said: “Now at least externally, all men look alike, with the face mask, in the whole world.”

“This at least,” he continued, “is an external sign.”

Further expounding on the Freemasonic concepts, Schneider explains that “liberty” means for them “freedom from God and his Commandments, that we are completely free and can rule over ourselves.” That is exactly what is taking place today, according to the bishop, who pointed to the “complete abandonment of the natural moral law” and finally also “of God’s Commandments.”

“Fraternity” means for the Freemasons that we are “all brothers,” and most importantly, “the equality of all religions.”

Here, Bishop Schneider sees that Freemasonry tries to reduce mankind to a “mere natural level,” “that we are brothers only according to the flesh” and “according to the blood,” and not anymore, “what Christianity had brought us, brothers in Christ, children in God.”

Thus, Bishop Schneider concluded, we “are coming into a situation where we, as Christians, will be a minority and where we have also to pass on to others our conviction, to proclaim it, to confess it.”

Bishop Schneider is an expert in Freemasonry; not long ago, LifeSite published a 2017 speech he gave on the 300th anniversary of the founding of Freemasonry. In this speech, the prelate explained how Freemasons had leading roles in the sexual revolution of the 1960s, and the promotion of same-sex “marriage,” abortion, and euthanasia, for example in France, thus promoting the de-Christianization of the West. He said:

Freemasonry supported also the so-called “Sexual Revolution” of 1968. The two Grand Masters of the two largest Masonic organizations in France, Frédéric Zeller and Pierre Simon, were actively engaged with some of their members in the Paris student revolts of May 1968. The said Grand Master Pierre Simon became then assessor of the minister Simone Veil, who legalized abortion in France. In 2012 the Parish Newspaper Le Figaro published a comprehensive dossier about Freemasonry, and Le Figaro let top members of Freemasonry speak in its newspaper forum. One of these Masonic officials openly stated that the laws legalizing abortion, the so-called “same-sex marriage” or “marriage for all,” and euthanasia were prepared in the idealistic Masonic “laboratories” and then, with the help of lobbying and through their members in parliament and in the government, pushed through the legislation.

In light of this specific evidence of the Freemasonic influence upon modern society, it will be important for us also to listen to Bishop Schneider’s warnings about a developing world government that is being established with the help of the coronavirus crisis.