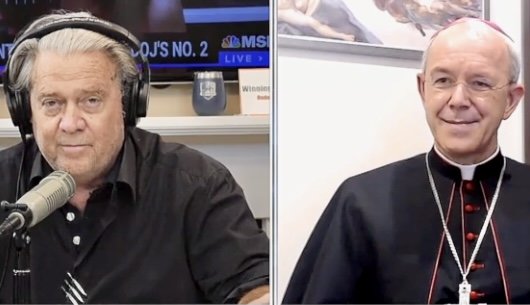 (LifeSiteNews) — Bishop Athanasius Schneider, in a recent interview with Steve Bannon at the October 8 War Room Pandemic, discussed the importance of the Traditional Latin Mass and its enduring nature.

Discussing Pope Francis’ new motu proprio Traditionis Custodes that aims at abrogating this Mass, the Kazakh bishop stated, “The traditional Mass is stronger than Pope Francis … it will win.”

In an EWTN interview aired October 7, the prelate insisted that the Novus Ordo Mass “substantially” has to go “back to the essence of the traditional rite of all times,” that is, the Traditional Latin Mass.

Let us first consider Bishop Schneider’s words to Steve Bannon (at 1:35). Asked about his upcoming book The Catholic Mass (to be published by Sophia Press), the bishop of German descent explains the essence of the Holy Sacrifice of the Mass, which “is the most important act of life of the entire Church. Why? Because the Holy Mass is the Mystical, Sacramental Presence-Real Presence of the act of salvation of the entire humanity — The Sacrifice of the Cross of Our Lord Jesus Christ.” The Holy Mass, he continued, “is the redeeming act of the God-man of Jesus Christ, the Redeemer of mankind … and therefore this is the fountain-the ever living fountain of graces of life of the Church.”

Subsequently, the prelate also touched upon the changes made to the Roman rite of the Holy Mass after the Second Vatican Council, pointing out that the first reformed Mass of 1965 – right after the Council – was not a breach with Tradition, not so “drastic or revolutionary” as the later developments and changes. “They introduced only small changes-not substantial,” he added.

“Therefore, the Church in 2,000 years never made in the liturgy drastic or revolutionary changes. It was for the first time in 1969 when Paul VI published his new really revolutionary order of Mass. And this is against the nature of the Church,” Bishop Schneider concluded.

The changes that came to the Mass after the Council “happened because of an ideology,” according to the prelate who is currently on a pastoral visit to the United States. He expounded on the defects of the Novus Ordo Mass as follows:

Those who reformed the liturgy under the leadership of Msgr. Bugnini and others, they wanted to approach the Catholic meaning, teaching and prayer wanted the Protestant meaning to stress more the banquet, the meal, but this is a secondary aspect. The centrality is the Sacrifice on the Cross. Christ did not redeem us with a meal with the Last Supper. He redeemed us with His Sacrifice on the Cross. So this tendency in the New Mass to make it more like a meal style as the Protestants believe and do. And also to make the Mass more informal, the entire style of the New Mass has so many moments of informality — so many gaps where the celebrant can improvise and even present himself. So it is very dangerous so the New Mass has in herself, the tendency to do performance and to be anthropocentric. This is very harmful for the faith, for the devotion and for the prayer.

With his new book on The Catholic Mass, Bishop Schneider hopes to be able to foster the restoration of the “centrality of God in the liturgy,” as the subtitle of his book states. “This is our problem today and this is the deepest cause of the crisis of the Church in our day: That we have banished God from the center in the Church life, in the prayer life, in the liturgy. Man became the center.”

Based on the growth of the traditional liturgy and faith throughout the world, Bishop Schneider is convinced that this Mass will “win,” and that the “traditional rite is stronger than Pope Francis.” Here, he was referring to the Pope’s new July 16 motu proprio Traditionis Custodes restricting the use of the rite of the traditional Latin Mass.

“These limitations,” the bishop told Bannon, “are really short lived – they will collapse. Because the truth and the beauty of the prayer of the Church of all ages is [are] so powerful and so beautiful. This is the demonstration that the Church is in the hands of God.” He added that since the publication of this new motu proprio, several priests he knows have seen an increase of faithful who are attending the Traditional Latin Mass.

Wondering about the reasons as to why Pope Francis would want to try to limit this beautiful Mass, Bishop Schneider thought that perhaps this Old Mass is seen as an “obstacle” to the agenda of the Pope and his helpers, which is more oriented toward “earthly realities,” and less on the supernatural realities. But this traditional Mass is just the opposite: It is concentrated on God, eternal life, and the supernatural.

That is why Bishop Schneider believes that the Novus Ordo Mass has to “go back to the essence of the traditional rite,” as he told EWTN’s Raymond Arroyo in his October 7 interview.

“Man puts himself at the center, and Christ has been put aside,” he stated, adding, “Manifested daily in the manner of celebration of the Holy Mass, especially the Novus Ordo Mass, [is] really a of man-centered style of life and prayer. It is this new Mass that is part of the “cause of the current crisis.” “We have to return to give primacy to Christ at Mass,” the prelate added. “From this comes the manner of behavior.” “Acts flow from the being.”

“In the future, both [rites] should become closer and be one rite,” Bishop Schneider stressed, “or maybe with some small differences, but substantially the Novus Ordo Mass has to go back to the essence of the traditional rite of all times.”